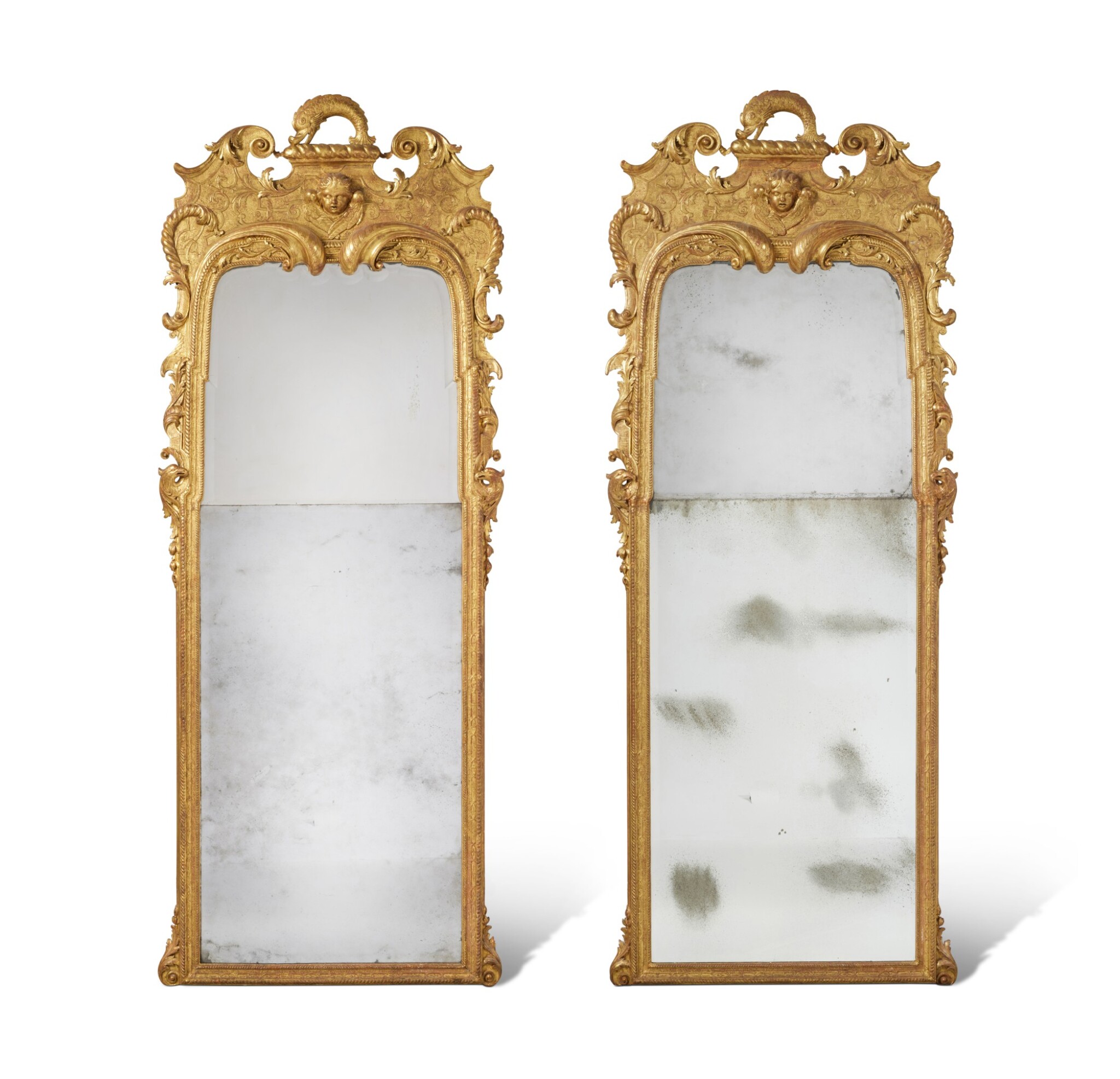 Both mirrors with rubbing to gilding throughout revealing areas of red bole, and mirror plates with oxidation and losses to silvering, most pronounced in larger plate of one. The lower right corner of one upper plate with small crack circa 2 1/2 in. and with an age crack above one eagle's head. The other mirror with small gilt scroll at right side of dolphin re-stuck and Cherub head with minor age cracks and with age cracks at each side above the eagle masks. Overall in good condition, of impressive scale and gilding a highly attractive color.

This impressive pair of mirrors can be confidently attributed to the London cabinetmaker John Belchier based on similarities with two large pier glasses he supplied in 1723 and 1726 to John Meller at Erdigg in Denbighshire, Wales (National Trust; illustrated in Bowett p.292 plates 6:50-51). Originally destined for the Second Best Bedroom and Best Bedchamber respectively, they now hang in the Saloon. The earlier mirror shares comparable strapwork cresting with double scrolls centering a mask whilst the second incorporates identical bold, inward-curving scrolls carved in high relief along the upper border of the frame that overlap onto the top edge of the plate. These distinctive, palm-like scrolls appear on other mirrors attributed to Belchier, among them an example in the Untermyer Collection, Metropolitan Museum, New York (46.116), and a girandole mirror also with a central winged cherub mask in the crest sold Sotheby's London, 20 November 2007, lot 13.

John Belchier (d.1753), possibly of Huguenot origin, was born in Oxfordshire and served his apprenticeship with the London Joiners' Company from 1699-1707. By 1717 he was established at 'The Sun' in St Paul's Churchyard, London, where his trade bill described his activities as a supplier of 'All sorts of Cabinet Work, Chairs, Glasses, Sconces, & Coach Glasses’, and another trade bill indicated he ‘Grinds & Makes-up all sorts of fine Peer & Chimney Glasses and Glass Sconces, Likewise all Cabbinet Makers Goods’, suggesting mirrors and sconces were a particular specialty of his workshop. His most significant client was the London lawyer and Master of the High Court of Chancery John Meller (1665-1733) for his country estate at Erdigg near Wrexham, and in addition to pier glasses and sconces Belchier provided a magnificent carved and gilt wood State Bed in 1720 and is believed to have supplied two japanned bureau cabinets, another type of furniture with which Belchier's workshop is often associated.

The heraldic dolphins naiant in the crests are found in the coats of arms of several prominent families in the British Isles including Clan Kennedy (Alisa) of Culzean and Cassilis, Scotland; the Courtenays of Powderham, Devon, and especially the Godolphins of Rialton and Helston, Cornwall. It seems most likely these mirrors would have been commissioned by a member of the Godolphin family as Francis, 2nd Earl Godolphin (1678-1766) was a prominent politician and courtier in London during the lifetime of Belchier. He served as both an MP and later a Peer, as well as lord of the bedchamber to both George I and George II, and was appointed Governor of the Scilly Islands in 1733. He was prominent in London social circles and a founding member of the Foundling Hospital, and his frequent residence in the capital suggest he was likely to be familiar with the most accomplished and fashionable cabinetmakers of the period.

The dolphin had been regarded as a family symbol since at least the 16th century, as both a play on words and perhaps a reference to their position as substantial landowners in coastal Cornwall. A dolphin naiant as it appears in the mirrors' crests is first seen in the arms of the 2nd Earl's father Sidney Godolphin, 1st Earl (1645-1712), and a pair of carved and parcel gilt painted wooden dolphins naiant dating from the 16th century, thought to have originally served as helmet crests for Sir William Godolphin (c.1518–70), are in the collection of Godolphin House, Helston, Cornwall (National Trust).