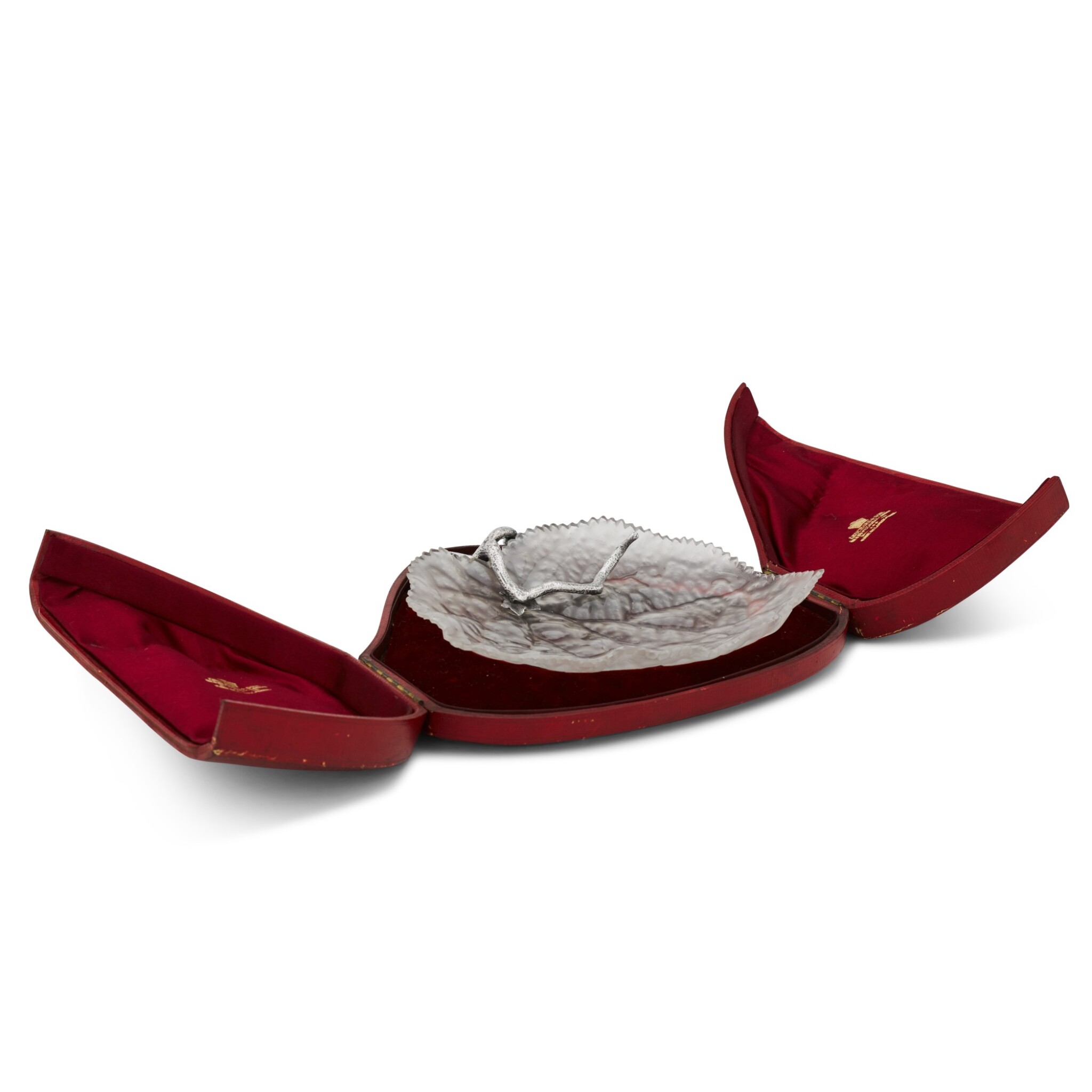 Modelled as a leaf with moulded glass bowl and handle realistically modelled as a tree branch, in original silk and velvet-lined case.

Hallmarks are clear. The nuts holding the glass bowl onto the stem seem to be replacements. One of the foliate brackets concealing the nut hole is missing. Some remnants of glue by the other nut hole. Light scuffs to the case.

Leuchars & Son was established in 1794 at 47 Piccadilly, London1 by James Leuchars (1759-1823), a native of Kinclaven, Perth, Scotland. He was already in London by 1 November 1784, the date of his marriage at St. Mary, Marylebone to Sarah Holmes (1765-1800). The first of their two daughters, Harriot Martha, was baptised at St. James’s, Piccadilly on 6 August 1786. An early advertisement for Leuchars’s business reads:

‘J. LEUCHARS, Fancy Head-Dress Maker to her Royal Highness the Duchess of York, No. 47, Piccadilly, London,

‘BEGS leave to acquaint the Ladies and Gentlemen of Edinburgh, and its vicinity, that during the Race Week he will attend at Mr BROWN’s No. 17, George Street, where he has for SALE a great variety of ELASTIC HEAD-DRESSES for both sexes, on a New and Improved Principle, which he doubts not but on trial will be found to give every satisfaction. - He takes this opportunity of returning most sincere thanks to his numerous Friends for past favours, and assures them it shall ever be his study to merit their future kindness.

Following the death of his first wife, Leuchars married Lucy Friend (1777-1847) at St. Marylebone on 28 November 1800, by whom he had three sons and three daughters, including James (1802-1850) and William (1804-1871). At this time the emphasis of Leuchars’s business changed from that of furnishing headdresses, &c., to that of a perfumer, toyman and dressing case maker, &c. In 1821, shortly after moving to new premises, he advertised: ‘FRENCH RETICULES, at very low prices; also an immense variety of PEARL COUNTERS and CARD BOXES. - J. LEUCHARS begs to inform the Nobility and Gentry, that he has just imported the above articles in a greater variety than was ever before exhibited to the Public: he has also a new and useful article in Work Boxes, with a splendid assortment of Dressing Cases, Writing Desks, Buhl and Ebony Inkstands, Chess Men, both India and English, and every kind of Chess and Backgammon Tables, at 38, Piccadilly, three doors from Sackville-street.’3

James Leuchars senior died on Sunday, 29 December 1822, after which the business was carried on by his widow until she was joined in the mid 1830s by her son, William, after which the style was changed to Mrs. Lucy Leuchars & Son. Following Mrs. Leuchars death on 9 February 1847,4 William took sole control. At the Great Exhibition of 1851 he won a Prize Medal for dressing cases. By 1871 the firm was trading as William Leuchars & Son following the introduction into the partnership of William Leuchars’s son, also William (1842-1909).

In 1902 Leuchars was amalgamated with Asprey’s of New Bond Street. ‘The lease of 38 and 39, Piccadilly has been sold and the combined businesses will be carried on after September 29 at 165-6 New Bond Street. To facilitate this arrangement the whole stock of LEUCHARS & SON is now being offered at reductions variety from 25 per cent. to 50 per cent. off the regular marked priced, for Cash Only. 38 and 39, PICCADILLY.’8

1. On the corner of Sackville Street, Piccadilly, opposite St. James’s Church.