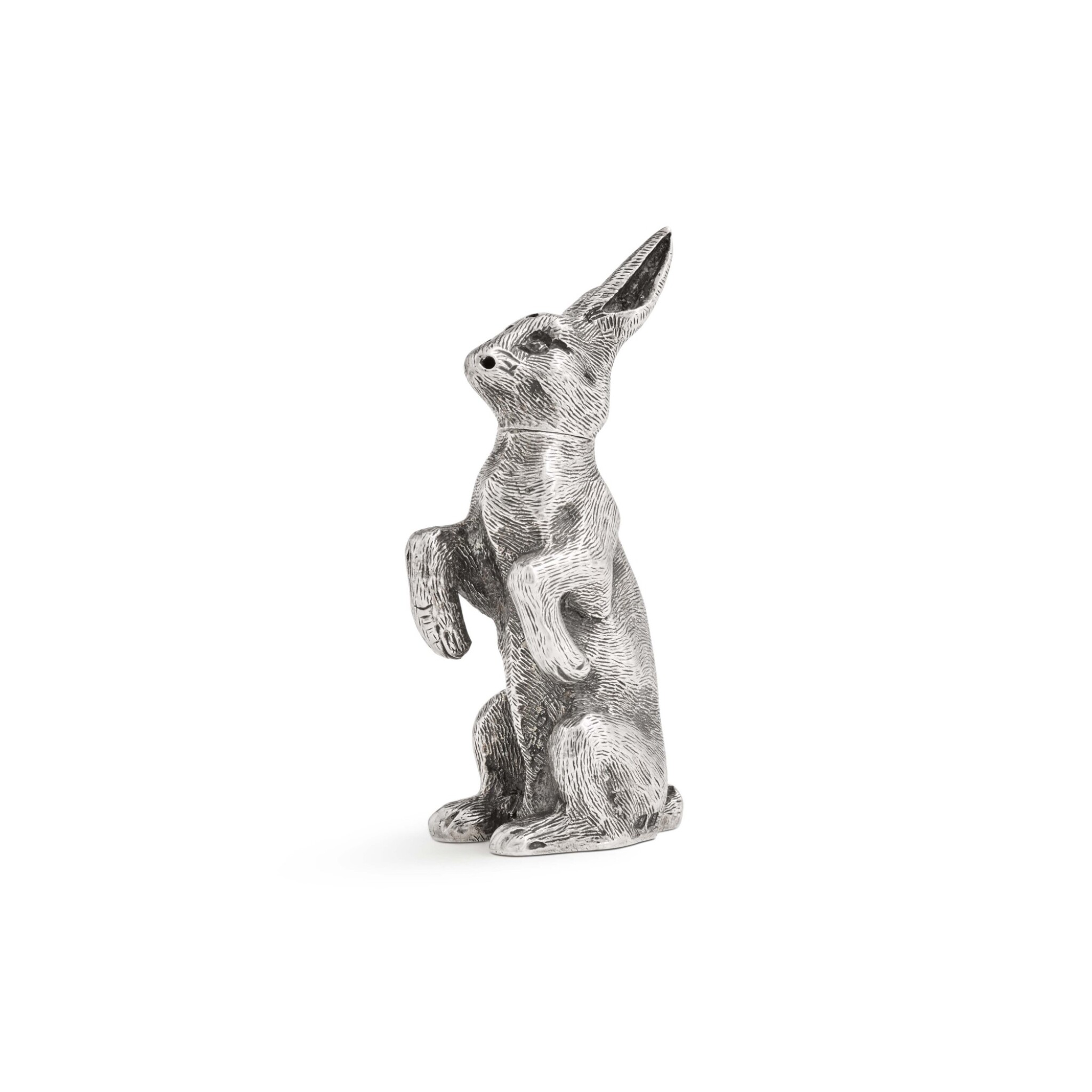 Realistically modelled as a rabbit or hare, with fur-effect chasing and pierced pull-off head

Saunders & Shepherd, well-known manufacturing wholesalers of jewellery and smallwork in gold and silver, novelties, souvenirs, &c., was established in 1869 by Cornelius Desormeaux Saunders (1824-1890), an accountant and formerly Clerk to the Imperial Gas Light and Coke Co., and James Francis Hollings ‘Frank’ Shepherd (1844-1925), formerly representing the Whitby Jet department of Buller & Hutchinson, manufacturing and wholesale jewellers of Bartlett’s Buildings, Holborn, London. Saunders and Shepherd began at the same location by acquiring Buller & Hitchinson’s jet stock and clients. At the International Exhibition in London in 1872, Saunders & Shepherd contributed ‘some tenderly-executed specimens of carved jet, with added ivy leaves in gold, which cannot but be generally and justly admired.’ (Journal of the Society of Arts, London, 4 October 1872, p. 880a)

Thereafter Saunders & Shepherd’s expansion was rapid and successful. By 1880 they were advertised as ‘silver jewellers, manufactures in gold and silver (no plated goods) of brooches, earring, chains, swivels, lockets and necklets, pendants, solitaires, studs, sleeve links, charms, thimbles, filigree.’ The firm was converted into a limited liability company as Saunders & Shepherd Ltd. in 1899. Further expansion necessitated the building of a new factory in Fetter Lane, London, erected in 1905/06. In 1909 a branch business, Saunders & Shepherd (Birmingham) Ltd., opened a factory at 94 Vyse Street. The company was re-registered in 1916 and was dissolved in November 2021.

Among Saunders & Shepherd’s most successful productions were replicas in silver-gilt and silver of the 12th century Coronation Spoon and the late 13th century Coronation Chair (King Edward’s Chair). These were introduced in 1902 at the time of the Coronation of King Edward VII and Queen Alexandra. Thirty-thousand replicas of the spoon were made in five sizes, from three to nine inches long; and ten-thousand chairs.