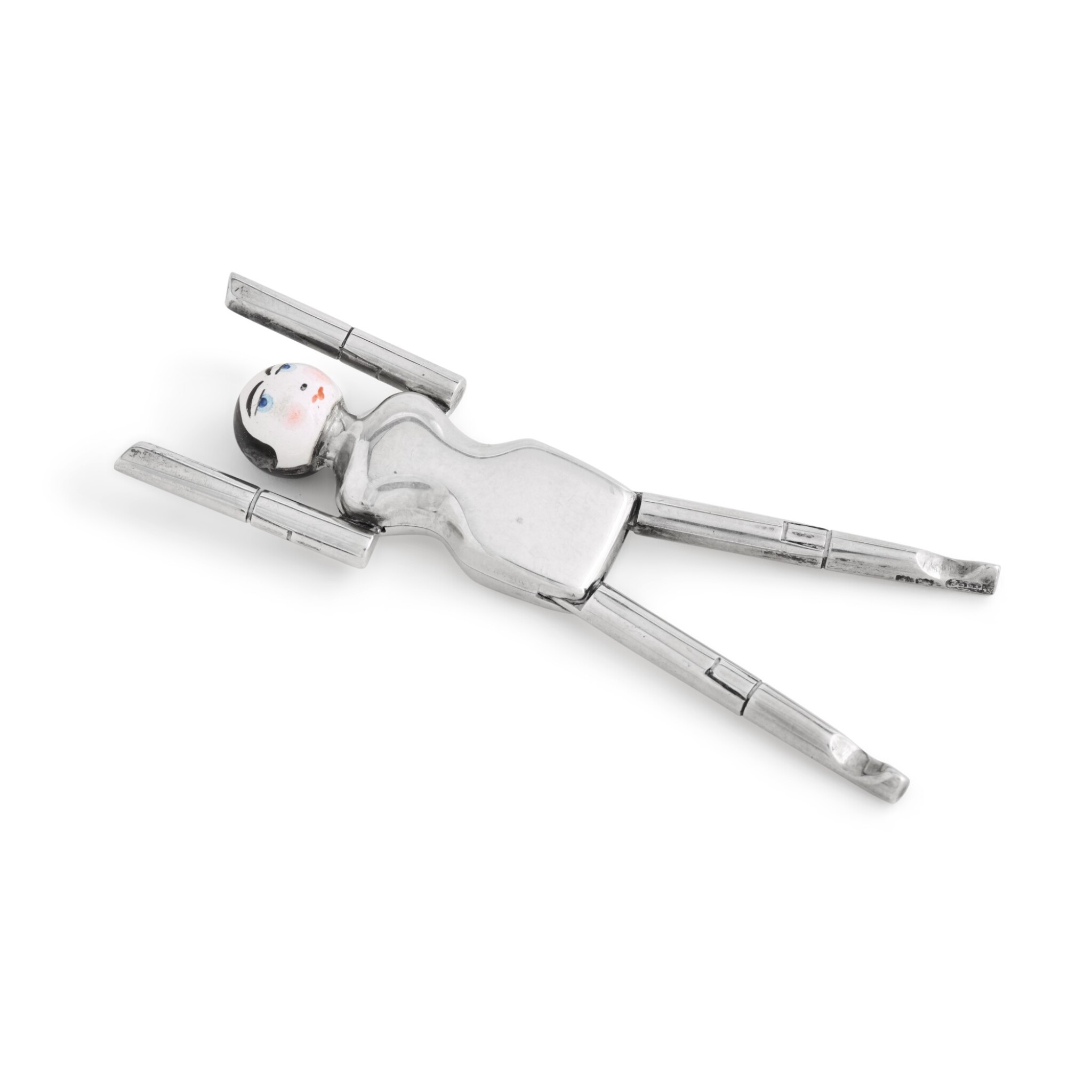 With a painted enamel face, the legs closing by squeezing the arms.

The design of Dutch Doll or 'peg wooden doll' pattern sugar tongs was inspired by the illustrations in The Adventures of Two Dutch Dolls and a 'Golliwogg' by Florence Kate Upton (1873-1922), first published in 1895. These characters became so popular that they were adapted for the theatre; at the Prince of Wales's Theatre, London in December 1901 a children's play, Katawampus, included a live Dutch Doll called Sarah Ann, played by Jessica Black (1884-1967): 'As the Dutch Doll Miss Jessica Black scored a veritable triumph. One has seen dozens of doll impersonations, but never one to equal hers. A doll to her finger-tips, wooden from first to last, there never came through her opacity the faintest gleam of humanity. If a fire broke out in the theatre she would certainly be left to save herself.' (The Morning Post, London, Tuesday, 24 December 1901, p. 3d) In January 1905 a Dutch Doll dance was included in a new ballet, The Dancing Doll, performed at the Empire Theatre, Leicester Square.

Dutch Doll sugar tongs remained popular items among jewellers' and silversmiths' stock. In 1911, 'The autumn season is invariably ushered in at VICKERY'S, 179-183, Regent-street [London], with some dainty little novelty, and this particular epoch is being marked by the advent of some Dutch Doll sugar tongs. There Vickery are supplying in two sizes, in either sterling silver and enamel, or silver gilt and enamel.' (The Queen, The Lady's Newspaper, London, Saturday, 7 October 1911, p. 636b) Nearly 12 years later, Australian readers of 'A Page for Women' in Melbourne's The Age were told that, 'An original wedding gift might consist of one of the new Dutch doll sugar tongs. In solid silver with an enamelled silver head, the ''doll'' has uplifted arms, and these are drawn together to work the tongs, or rather the ''legs.'' These useful little ''ladies'' may be had in dainty leather cases.' (Tuesday, 20 February 1923, p. 10c)

Cohen & Charles, manufacturing and wholesale gold and silversmiths, was established about 1890 by Albert (Albrecht) Cohen (1864?-1934), a native of Munich, Bavaria, and Charles Solomon (1866-1952), one of the children of Lewis Solomon, an Austrian jeweller who settled in Oxford. From 1936 the business was styled Cohens & Charles Solomon and as such was eventually taken over in 1958 and run as a separate concern by S.J. Rose & Sons (Goldsmiths) Ltd.