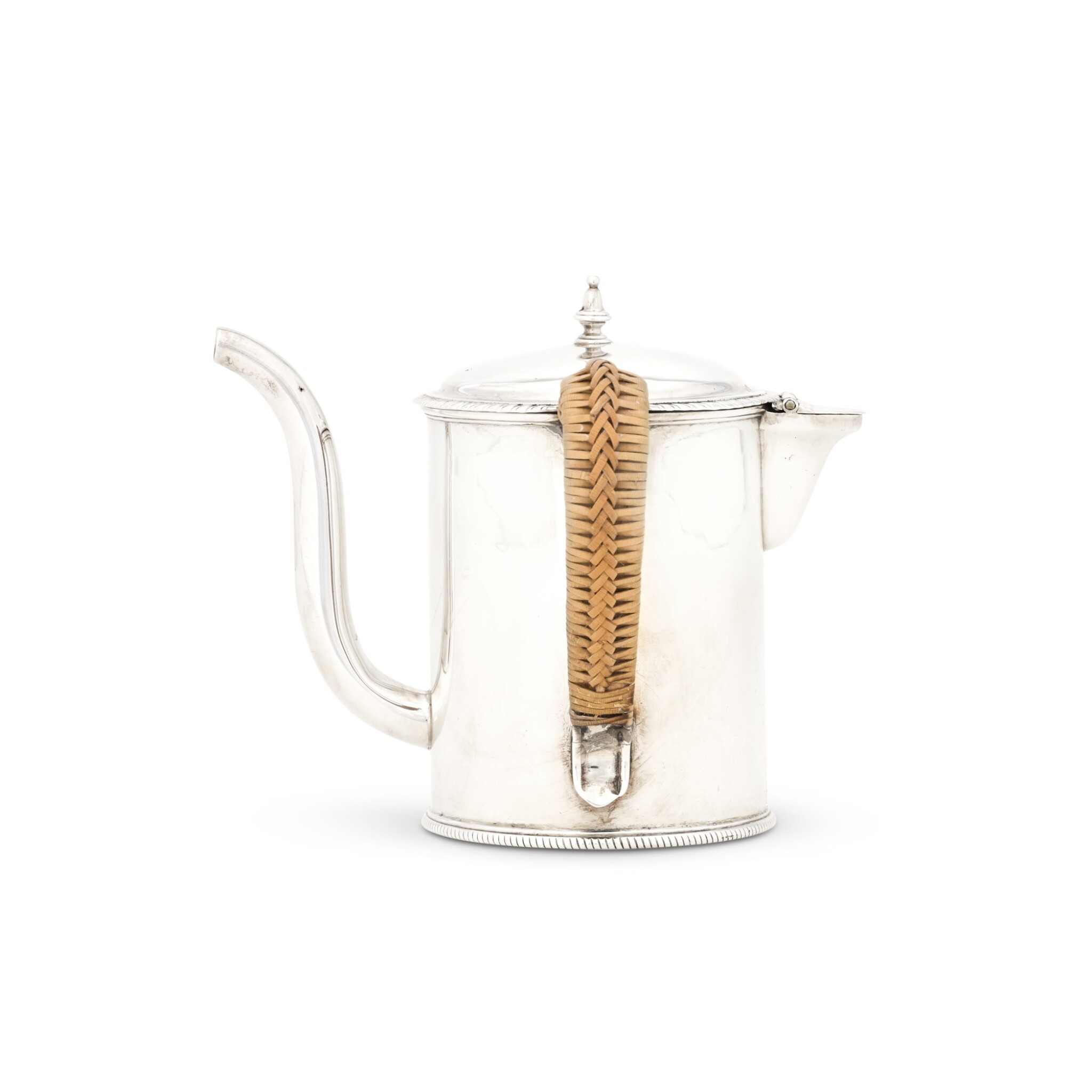 Cylindrical with a raffia handle, the warming reservoir filled by the side spout, the lid crested.

Light wear to hallmarks, but legible. Also marked with later French import marks. Lid of side spout is not marked. The body has been erased, the crest on the lid is later. Uneven surface and small dents. Finial pushed in and possibly repaired.

The mark of Philip Norman is among those recorded in the so-called ‘Unregistered Marks’ section of A.G. Grimwade’s London Goldsmiths, 1697-1837 (no. 3750). Like many other London goldsmiths’ maker’s marks of the middle of the 18th century, Norman’s is only considered unregistered because of the disappearance of two of the Goldsmiths’ Company’s maker’s marks registers: that for the smallworkers, which was in use from 1739 to 1758, and for the largeworkers, in use from 1758 to 1773.

Mr. Grimwade remarks (p. 608) that Norman’s ‘name appears only in the [Parliamentary] Report list of 1773 as plateworker, St. Martin’s Lane. In the absence of any other name matching the initials of the mark attributed to [Norman],’ he concludes, ‘there can be little doubt as to its correctness.’ Since that was published in 1976, several other traces of Philip Norman have been found, not least by Helen Clifford in her various studies of the surviving ledgers of Parker & Wakelin, commercial ancestors of Garrard’s. This connection was confirmed by the appearance of twelve silver-gilt ladles (‘Olio spoons’) with Norman’s mark, London, 1768, which were included in the sale of The Harcourt Collection (Sotheby’s, London, 10 June 1993, lot 80), the Harcourt family having been customers of Parker & Wakelin.

Other references to Philip Norman, whose working life seems to have been between about 1760 and 1780, are in his marriage bond, dated 11 November 1768, in which he is described as ‘of the Parish of St. Clement Danes in the County of Middlesex Silversmith . . . Bachelor.’ His bride-to-be was Mary Tubb, spinster. (London Metropolitan Archives, MS 10091E/81/3/954) The couple were married at St. Clement Danes on 15 November 1768, when she was described as of the Parish of St. Pancras, widow (sic). The witnesses were Michael Wiegand and Albert Conrad Horn. Our last sight of Norman in print is when in April 1773 one Robert Clenyon was committed at Bow Street for having stolen from him silver teapoons and buckles. (The Public Advertiser, London, Tuesday, 6 April 1773, p. 3a)