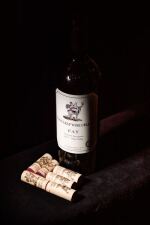 The FAY Vineyard is where the story of Stag's Leap Wine Cellars began.

Established by pioneering grapegrower Nathan Fay in 1961, it was the first planting of Cabernet Sauvignon in what is now the Stags Leap District nested appellation. At the time, the area was considered to be too cool to grow Cabernet Sauvignon.

Winemaker Marcus Notaro will lead a special virtual tasting session with you as the winning bidder and discuss the wines, the vineyard and the history of FAY Cabernet Sauvignon.