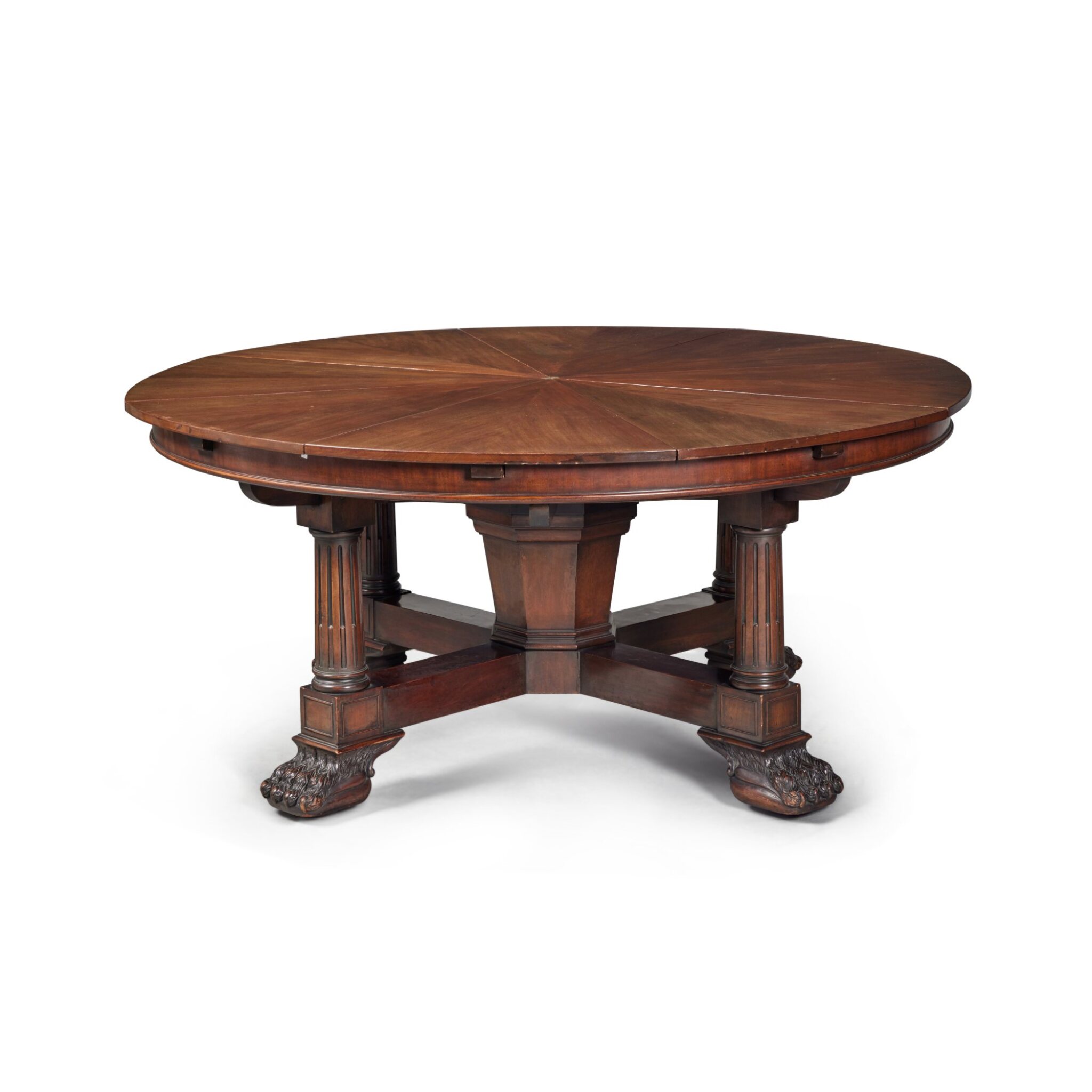 In overall good condition with minor scratches and staining consistent with age and use.

Remarkable for its marvelous yet elegant mechanisms, the design for present example can be seen as a physical manifestation of one of the central ideas during the Industrial Revolution: the invention of machines to do the work of hand tools. By utilizing a central Capstan mechanism, a rotating machine with a vertical axis, the design for the present table converts the user’s rotational motion to linear displacement of the leaves of the table, expanding the size of the existing table. Combined with additional leaves of varying sizes, the table can then be converted from originally seating six to accommodating twelve guests.

This design originated from Theodore Alexander Robert Jupe, upholder of 47 Welbeck Street, Cavendish Square, and he was subsequently granted British Patent no. 6788 on 11th March, 1835. He produced the first tables of this type in association with John Johnstone of New Bond Street, which bears the stamp Johnstone, Jupe & Co. The partnership between Jupe and Johnstone lasted until 1842. Following Robert Jupe’s departure, Johnstone formed a new partnership with Jeanes and continued to produce this model and stamped them Johnstone & Jeanes. One such example, formerly in the collection of Sir Hew Hamilton-Dalrymple of North Berwick (1814-1887), 6th Baronet, sold in our London rooms, 12 November 2019, lot 24.

A full description of the patent is documented in Patent for Inventions. Abridgements of Specifications Relating to Furniture and Upholstery, London, 1869, vol. 24, pp. 67-68, which, in part, read:

“An improved expanding table”, so constructed that the sections composing its surface may be caused to diverge from a common centre, and that the spaces caused thereby may be filled up by inserting leaves or “filling pieces.”…

This innovative design remained popular throughout the later 19th century and to this day. While other cabinetmakers began manufacturing this model, works stamped by other makers in the 19th century are extremely rare. The present table was produced by British cabinetmakers Maple & Co., as seen on the central boss. Established by John Maple in 1841 and based in 145, 146 and 147 Tottenham Court Road in London, the firm quickly gained success and popularity in the remainder of the 19th century into the 20th century and traded in Paris as early as 1885. Since its founding, Maple & Co. developed into one of the worlds largest furniture makers and retailers in the world. Examples of early trade-cards and bill-heads are in the Heal Collection at the British Museum, including an advertisement for John Maple which lists the prices for furniture provided, acc. no. Heal,28. 135.