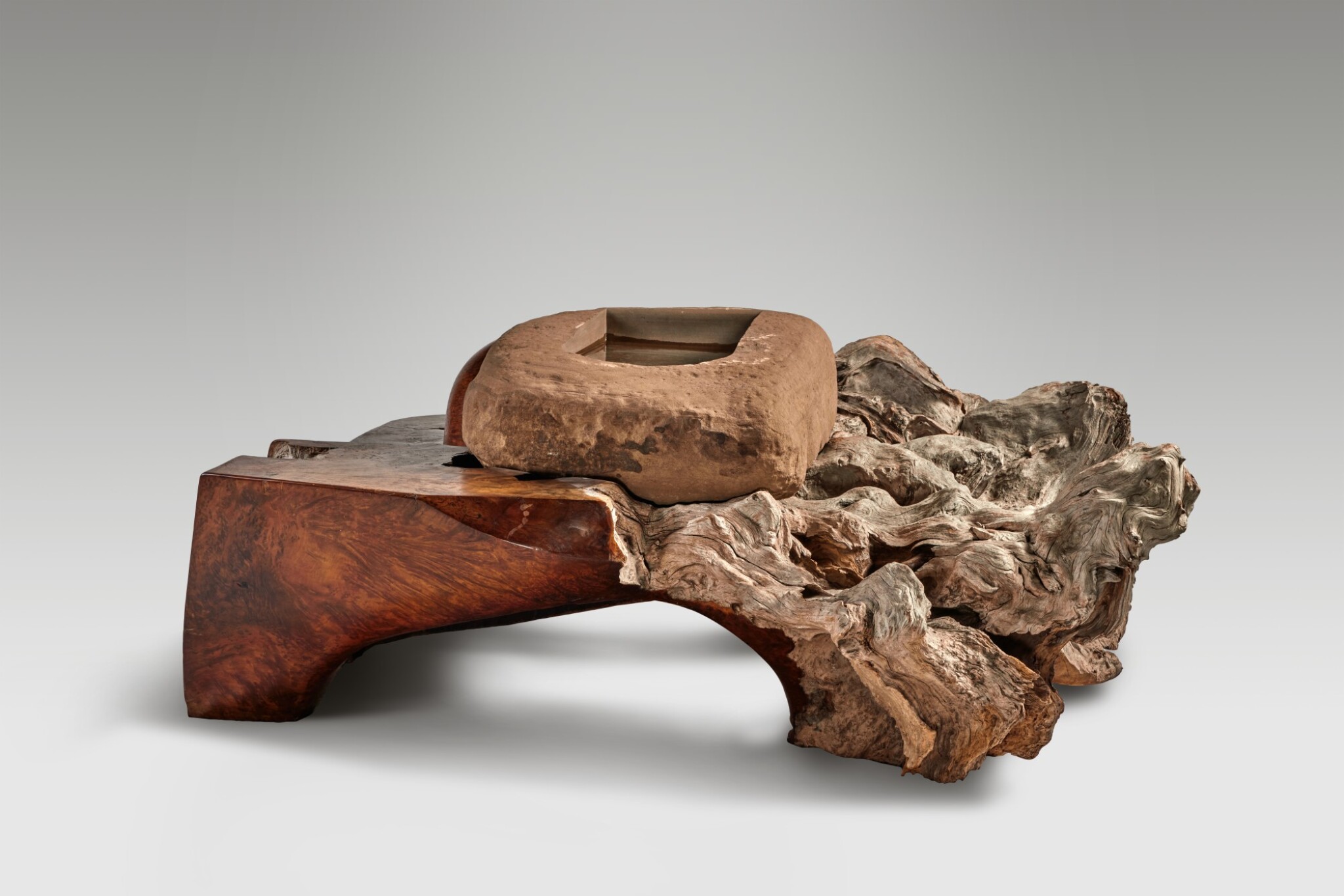 Overall in very good condition. The present table is composed of old growth redwood burl and displays irregularities, hairlines and discolorations inherent to the wood selection and intentional within the artist’s practice. The wood surfaces throughout present with scattered abrasions, indentations and small chips particularly concentrated to the edges, as well as surface soiling and residue accretions concentrated to the recessed contours, consistent with age and gentle use. The central sandstone element is designed as a water basin and presents with scattered abrasions and scuffing, with more pronounced wear and efflorescence deposits to the interior consistent with use and the nature of the material.

David Rago, Lambertville, NJ, private sale
Acquired from the above by the present owner
It is hard to believe that J. B. Blunk could ever have been an obscure figure. To begin with, there is the sheer monumentality of his work. The Planet, his seating sculpture at the Oakland Museum of Art made from the root structure of a giant redwood tree, can accommodate a whole school group-worth of crawling children (and often does). Then there is the company he kept. A friend and acolyte of Isamu Noguchi, he was the first American ever to train in a traditional Japanese pottery (that of Kaneshige Toyo); he built his extraordinary, masterful house on the Inverness property of Surrealist painter Gordon Onslow-Ford, and was a near neighbor, there, of Art Espenet Carpenter.

Despite these and other richly suggestive connections, Blunk’s work in pottery, carved wood and stone has only recently gained nationwide attention. Maybe he went off the grid a little too effectively. Or maybe his work was too syncretic, too saturated in craft, to command art world attention until a broader and more imaginative view came around. In any case, he’s now the man of the hour, with major recent exhibitions at the Oakland Museum and at the New York City gallery Blum & Poe, and a new book out about his life and work.1

Against this backdrop, Wood Stone Water Table comes across as a one-object retrospective. Like The Planet, it is fashioned mainly from the base of an old-growth redwood tree – all that was left after predatory logging – which is partly left natural, and partly sculpted smooth to reveal the rich color and figure of the timber. Blunk worked with his assistant at the time, Rick Yoshimoto, to notch the redwood to receive a shaped stone; it features a basin suggestive of some ceremonial purpose, a common motif in Blunk’s later work.2 While originally commissioned for a private residence, the work would not be out of place in a mountaintop temple. When filled (as intended) with water, it exemplifies his elemental vision: three basic materials, in a collective embrace.

[2] Mariah Nielson, daughter of the artist and the leading authority on his work, notes, “bowls or recesses appear in many of Blunk’s later pieces including Greens (1978) at Greens restaurant in San Francisco, Sam Francis's desk (1990), and many other coffee tables made for private clients. He also collected river and beach stones with naturally occurring basins like this.” Email to the author, 16 May, 2022.