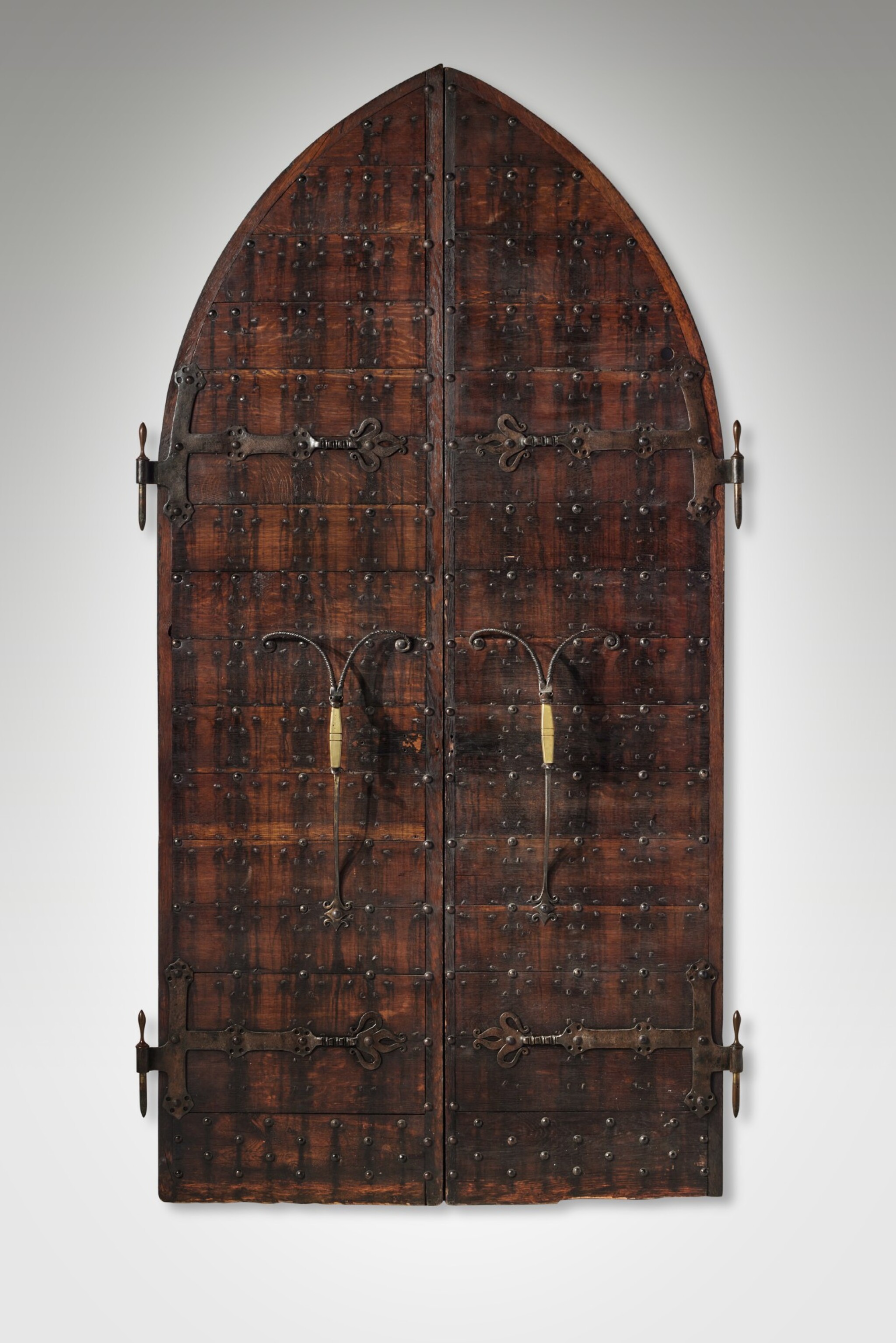 Goodhart Hall, Bryn Mawr College, Pennsylvania, circa 1928
Collection of Peter Renzetti
Rago Auctions, Lambertville, New Jersey, June 16, 2012, lot 50
Acquired from the above by the present owner
“Ironwork in Goodhart Hall,” The Architectural Record, vol. 65, no. 2, February 1929, p. 173 (for a period photograph)
Jack Andrews, Samuel Yellin Metalworker, Ocean City, MD, 1992, p. 48
Henry Jonas Magaziner, The Golden Age of Ironwork, Ocean Pines, MD, 2000, p. 24
The story of the craft movement is filled with unexpected connections. One arises in the present auction, which sets a late, great example of Wharton Esherick’s spiral staircase alongside this set of double doors, made by Samuel Yellin for Goodhart Hall, an auditorium at Bryn Mawr College. The commonality between these two equally commanding but apparently dissimilar objects is the architect George Howe, who dominated Philadelphia architecture in the 1920s and 1930s. He collaborated with Esherick on a presentation at the 1939-40 World’s Fair, anchored on Esherick’s own first staircase; and it was his earlier firm, Mellor Meigs & Howe, which designed Goodhart Hall. The International Style, which Howe would have a large part in introducing to the east coast (notably in his PSFS Building of 1930-32, a collaboration with William Lescaze), was just on the horizon. The building betrays no sense of that imminent revolution in style and structure, however, instead finding an ideal midpoint between Gothic Revival and Art Deco.

To appoint the building, Mellor Meigs & Howe turned to their frequent collaborator, Yellin, far and away the greatest blacksmith of the early twentieth century. A Ukrainian émigré, he was by the late 1920s at the height of his powers, running a shop so large that it constituted America’s greatest training ground for the craft. This was a unique phenomenon: blacksmithing had been massively disrupted by the arrival of the automobile (no horseshoes needed) and mass-produced metalwork more generally. Yellin bucked the trend, partly by concentrating on architectural appointments, but mainly by virtue of his sheer artistry. The elegance of his design, and the perfection of his shop’s execution, can be seen in these doors’ strapwork hinges and, especially, the elongated handles. The effect is definitely medieval, but also strikingly streamlined: a quintessential example of Yellin’s work, which provided an otherwise missing link between historic craft and future-facing artistry.