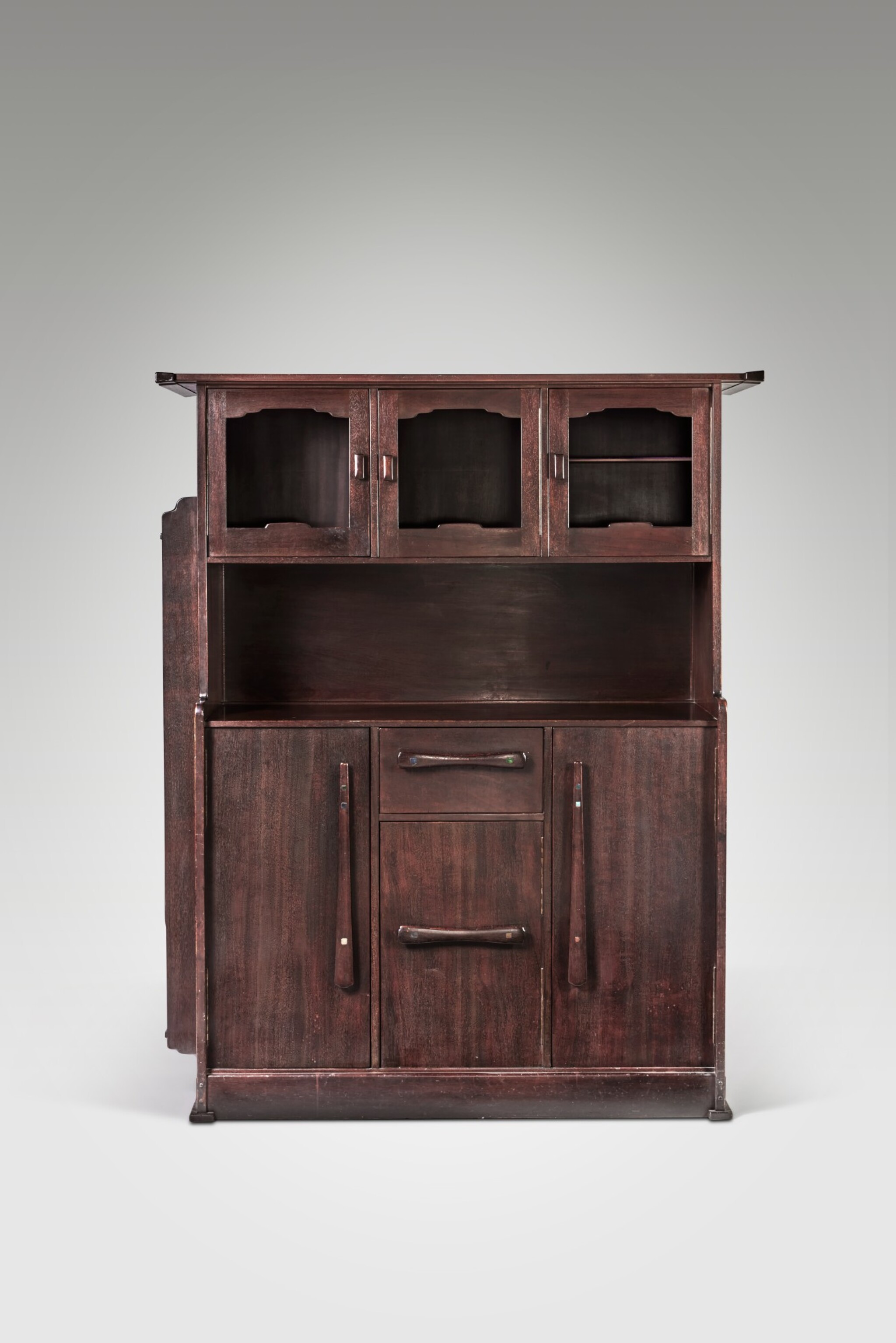 executed in the workshop of Peter Hall, Pasadena, California

Overall in very good condition. The mahogany surfaces appear to retain their original finish throughout, displaying a deep russet brown coloration complemented by the vibrant iridescent glass tiles. The cabinet presents with occasional areas of fading and discoloration to the finish revealing a warmer tawny brown undersurface, concentrated to the edges and not visually distracting. The mahogany surfaces throughout present with minor surface scratches, abrasions and small indentations consistent with age and gentle use. The edges and base present with slightly more concentrated wear and very small chips to the wood, consistent with age and not visually distracting. The interior is fitted with two shelves and five storage compartments, and the upper proper left cabinet is fitted with one removable shelf lined with purple felt. The proper right side of the cabinet is fitted with a shallow storage closet. The small inset glass tiles all appear original and undisturbed and are in very well-preserved condition. The proper left front door handle does not retain its lower glass tile, not visually distracting. The center top drawer handle with a fine hairline crack and associated loss to one glass tile, measuring approximately ½ inch and stable. A highly sculptural and beautifully proportioned design by the renowned California architects displaying exquisite workmanship and attention to detail.

Randell L. Makinson, Greene & Greene: Furniture and Related Designs, Salt Lake City, 1982, p. 125 (for a period photograph of the present lot illustrated in Charles Greene's studio, Carmel)
A good case can be made – and in fact has been made, by historian Edward S. Cooke, Jr. – that the decisive moment in the career of Charles and Henry Greene came when they met another pair of brothers, Peter and John Hall.1 Swedish-born and Illinois-raised, these highly skilled cabinetmakers had acquired their training in various millwork shops on the west coast. Beginning with their collaboration on the Henry Robinson House (1905-6) in Pasadena, the Greenes and the Halls forged an extraordinary creative partnership, a marriage of architectural vision and consummate craft excellence.

The present cabinet, made by the Halls for Charles Sumner Greene’s own use in his studio in Carmel, provides a focused encapsulation of their jointly achieved aesthetic. It has several features typical of their work, including subtly shaped handles and gently rounded terminations on the moldings. The material, a Honduras mahogany darkened with fuming (a process involving exposure of the timber to ammonia, which causes a chemical reaction in the tannins), sends quite a different message from the sturdy white oak preferred by the other Arts and Crafts makers like Gustav Stickley. Interestingly, a period photo of Charles Greene’s office shows that the piece stood right next to an oak filing cabinet that he himself had made back in 1903, in the Stickley style.2 The juxtaposition shows the progression of his sensibility, and attests to the all-important contribution that the Halls made to that maturation.

[1] Edward S. Cooke, Jr., “Scandinavian Modern Furniture in the Arts and Crafts Period: The Collaboration of the Greenes and the Halls,” American Furniture (Chipstone Foundation, 1993).