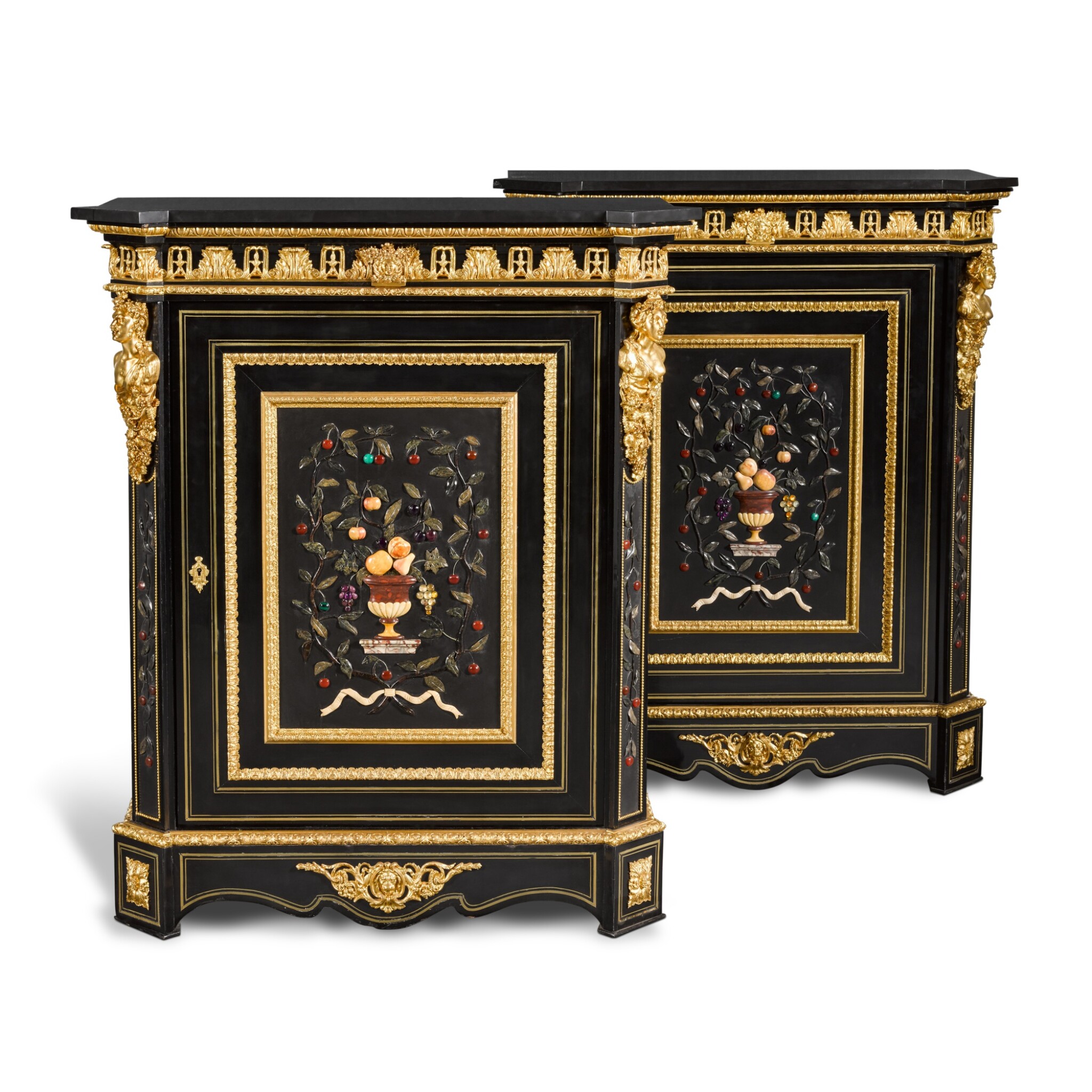 each with a black marble top with canted corners above a frieze, the door inlaid with hardstone carved in relief depicting a vase from which issues fruiting branches, opening to reveal two shelves

In overall good conserved condition. Generally with minor old marks, scuffs and scratches consistent with age and use. The veneers with very minor age craquelure and the reverse of the doors with signs of stabilized age cracks running vertically. Some minor scuffs and losses to shelves. Minor losses to hardstones reliefs: one leaf and a cherry along the corner of one, some fruit stems missing to the front door of one, and one branch end missing along the corner of one cabinet. The cherry to the front of one with signs of a restored break, and one with its stem probably replaced. Two keys.

The present pair of meubles à hauteur d’appui and their style, particularly the use of semi-precious hardstone ornament, attributes them to the maker Hippolyte-Edmé Pretot (1812-1855) who was renowned for his creation of ‘meubles incrustés’ (furniture applied with pietre dure) in the 19th century.

Pietre dure typically refers to the Florentine mosaic of hard and semi precious stones in a technique practised from the beginning of the 17th century. Though the technique was pioneered at the time in Italy, it soon made its way to France where Louis XIV promoted it and even opened his own workshop for pietre dure at the Gobelins Manufactory. The appeal for pietre dure, characterized by the rich colours of the stones contrasting a black marble back or ebony/ebonished veneer, did not seize in the centuries and several French cabinet makers in the 19th century repurposed 17th/18th century original panels and also expertly created their own executions such as Hippolyte-Edmé Pretot, here carving hardstones in relief. A pair of similar meubles d’appui signed PRETOT were sold at Sotheby’s, Hong Kong, Age of Elegance, 6-16 January 2014, lot 11. A console table by Pretot also featuring panels inlaid with hardstones was sold at Christie’s, London, The Opulent Eye, 18 September 2014, lot 250.