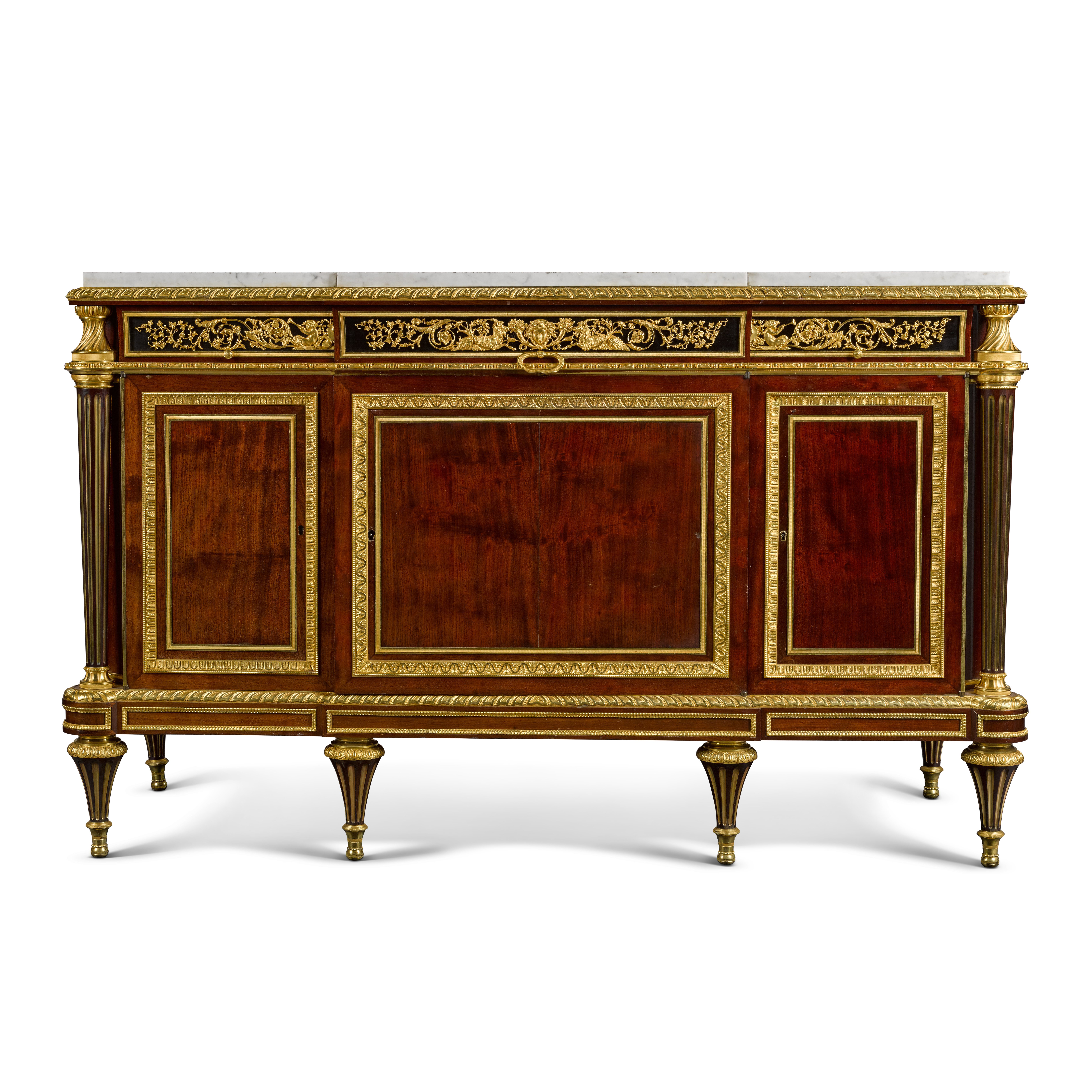 the white marble top above three drawers, the lower section with one door to the centre opening to reveal a central compartment, and a door on the right handside opening to one shelf; stamped twice HENRY DASSON to the back of carcass

In overall very good condition. The marble top with minor old marks, scratches and scuffs to edges, all consistent with age and use. There is some residual glue from a former label to the centre of the top, this could be easily removed. The mahogany veneer in good condition, with one area of minor loss beneath the central drawer and above the central door - this is not too distracting and partially hidden behind the handle. The top of the central door with an area of wear due to the friction of the door with the main body of the commode. One age crack to the back of the central door. The right side with one area of minor lifting to veneer toward top right, and some minor losses to back right corner and edge along the back right side. The mounts in good condition. Of very good appearance and good quality.

Epitomizing the Louis XVI style, this commode à vantaux was created by Henry Dasson (1825–1896) after the oeuvre of the cabinetmaker Adam Weisweiler (1744-1820) and reveals the luxurious fashion in the late 19th century of producing celebrated, meticulously detailed and technically skilled recreations and emulations of the greatest furniture pieces from the ancien régime.

The present commode is especially close to two originals by Weisweiler, one supplied in 1788 through the marchand-mercier Daguerre to Louis XVI at the Château de Saint Cloud (now Château de Compiègne (inv. no. C46020) and the second at the Musée du Louvre (inv. no. OA 5232).

As one of the most original ébénistes of the Louis XVI period, Weisweiler had a wide repertoire of commodes which all derived from a similar form: those fitted with drawers and those with hinged panels, called à vantaux. Although Weisweiler did not appear to be the inventor of the commode à vantaux, combining both drawers and vantaux - they formed a major part of his production. Weisweiler was particularly fond of this form of commode and utilized all the materials he had at his disposition: they were in mahogany as well as thuya wood and a number were also decorated in pietre dure and lacquer.

In accordance with his excellence, Weisweiler's clientèle was prestigious and included the French Royal family, the nobility, foreign royalty including the Queen of Naples, Marie-Carolina and the King of Naples.

Henry Dasson was one of the leading French cabinetmakers of the 19th century continuing in the tradition of the great 18th-century Parisian ébénistes producing case furniture veneered in tropical woods or lacquer of the highest quality mounted in gilt bronze. He began his career as a clockmaker and bronze manufacturer and turned to cabinetmaking in earnest in 1871 with the acquisition of the workshop and remaining stock of the late ébéniste Charles-Guilluame Winckelsen (1821-1871). He participated in the Paris Exposition Universelle of 1778 where he exhibited a copy of the celebrated Bureau du Roi by Oeben and Riesener and was praised for having created 'par la perfection de ses oevures une très haute situation à laquelle nous applaudissons chaleureusement'. In 1883 he was named Chevalier de la Légion d'Honneur and in 1889 raised to the title of Officier following his successful participation in the 1889 Exposition Universelle, where he exhibited furniture in the Louis XIV, XV, and XVI styles.