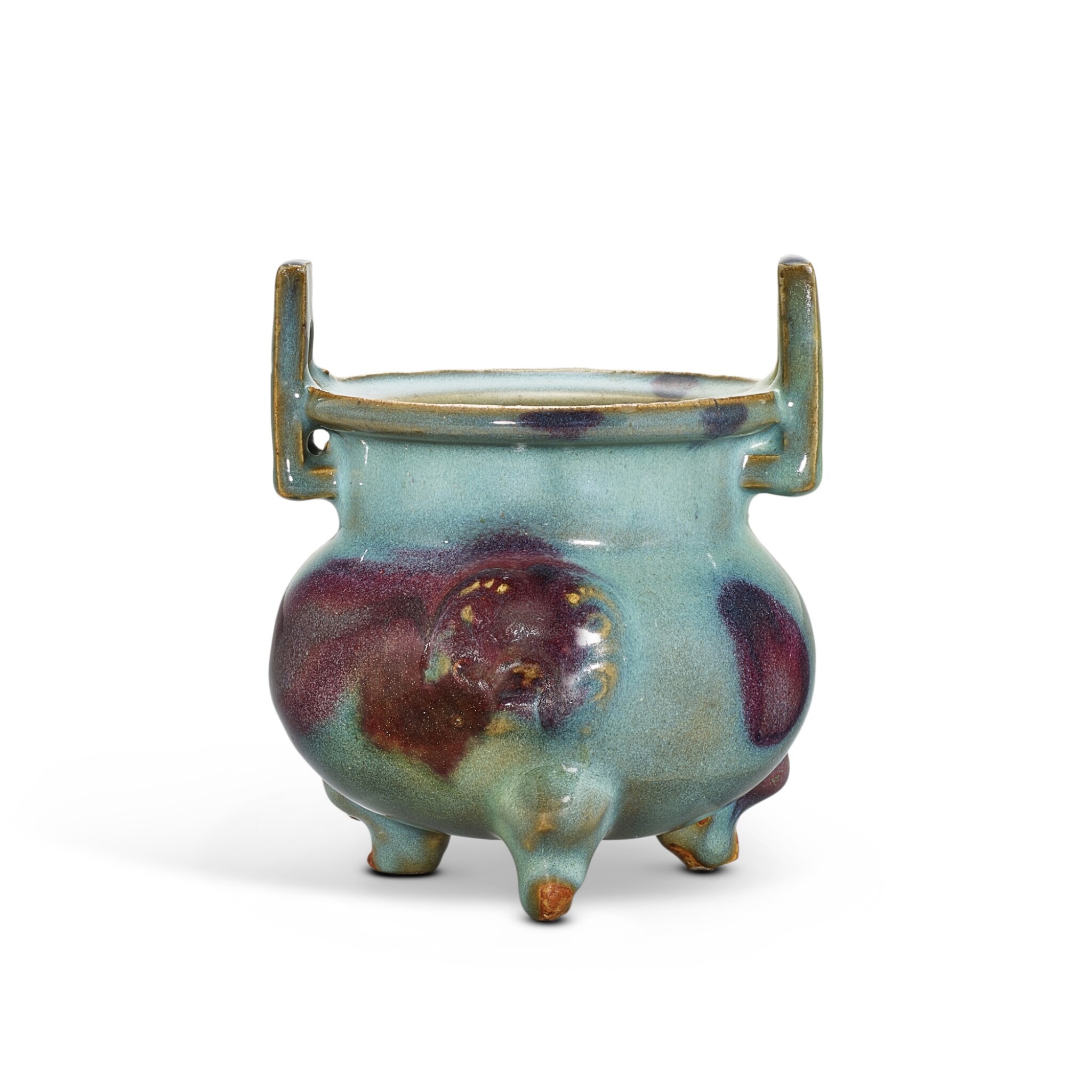 The dating of this lot is consistent with the results of Oxford Authentication Ltd. thermoluminescence test no. P122e76.

The upper part of the right handle restuck. One mask with a restored flake (area approx. 3.5 by 3cm), visible in the main image. The other handle with a minor flake retouched to the bottom left corner. With a large area of associated overspray, predominantly to one side of the body. The base of two feet drilled with a tiny hole for thermoluminescence (TL) testing. A copy of the TL test report is available upon request.

Wares from the Juntai kiln site in Yu county, Henan province, an area formerly known as Junzhou, are remarkable for their luscious thick glazes of intense colouration which can vary from light to deep turquoise blue. In the early 12th century potters began applying splashes of deep purplish-red derived from copper to the glaze before firing, resulting in patches of purple, lavender and tones of deep blue on the primary milky-blue glaze. As seen on this piece, these splashes often had a strong calligraphic quality and added a flamboyant effect to the vessel that was of immense appeal to the literati and nobility of the time.

Junyao incense burners of this shape and with moulded designs are generally attributed to the Yuan dynasty due to their similarities with a much larger incense burner dated in accordance to 1309, excavated at Huhehot in Inner Mongolia, and illustrated in Sekai toji zenshu/ Ceramic Art of the World, vol. 13, Tokyo, 1981, col. pl. 103.

A similar incense burner, but lacking the splashes is illustrated in Porcelain Unearthed from Jininglu Ancient City Site in Inner Mongolia, Beijing, 2004, pl. 89; another from the collections of George Eumorfopoulos and Montague Meyer, was sold at Christie’s London, 14th April 1980, lot 250, and again in these rooms, 29th April 1997, lot 508; two were sold in our London rooms, the first from the collection of Mrs E. Bennett, 24th May 1955, lot 148, and the second from the W.W. Winkworth Collection, 12th September 1972, lot 31; and a slightly smaller example was included in the Min Chiu Society exhibition An Anthology of Chinese Ceramics, Hong Kong Museum of Art, Hong Kong, 1980, cat. no. 36, and sold in these rooms, 29th November 1976, lot 434.

See also a larger incense burner of this type in the Shanghai Museum, Shanghai, illustrated in The Complete Works of Chinese Ceramics, Shanghai, 2000, pl. 207; and another illustrated in Splendour of Ancient Chinese Art. Selections from the Collections of T.T. Tsui Galleries of Chinese Art Worldwide, Hong Kong, 1996, pl. 28, and sold at Christie's New York, 22nd April 1999, lot 260.