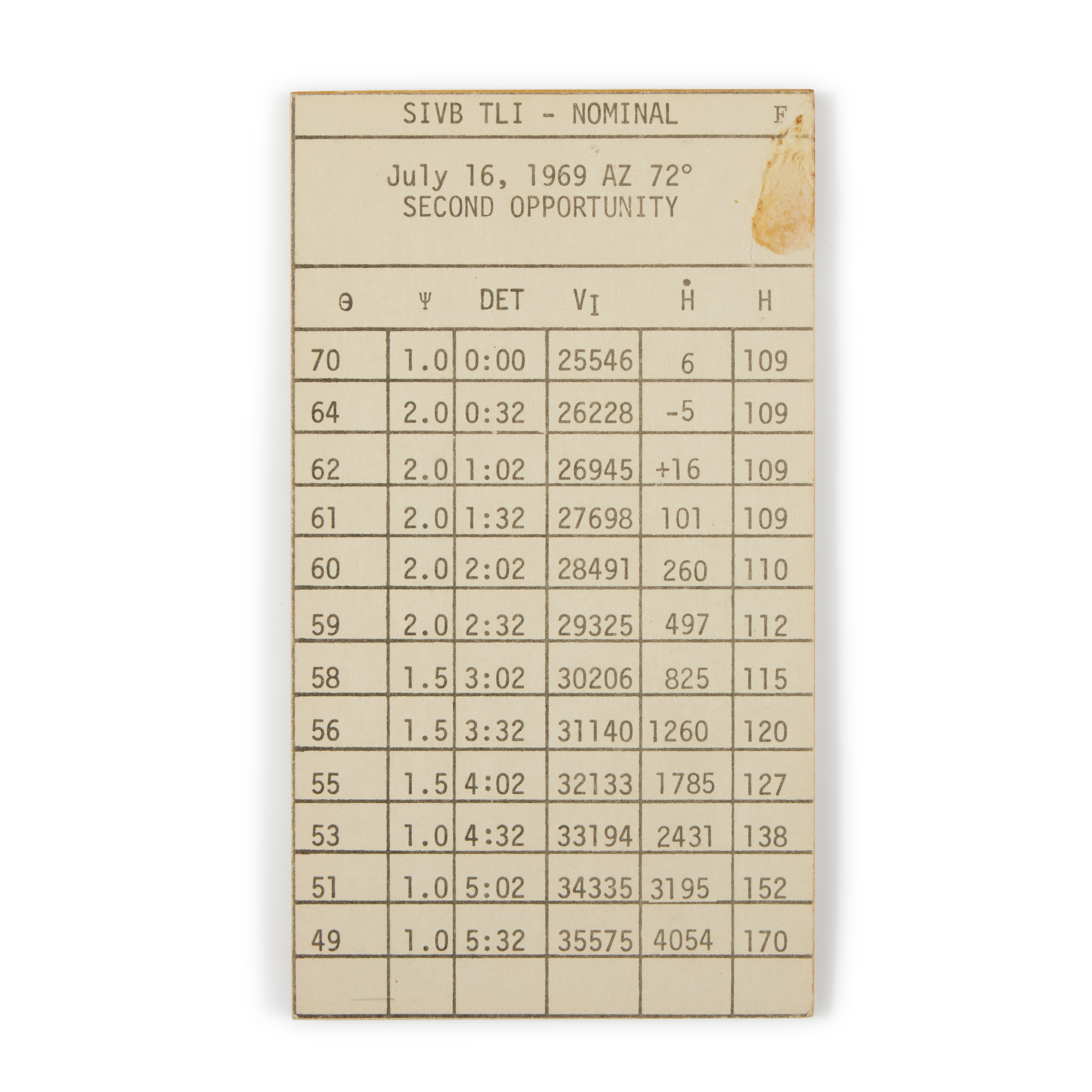 5 by 2 7/8 inches, printed to recto of heavy card stock. Strip of Velcro (4 11/16 x 1 in.) affixed to verso running length of card, smaller Velcro rectangle (15/16 x 9/16 in.) affixed to verso at top right corner. Notation in MICHAEL COLLINS' hand in black ballpoint pen reading "OK." Slight wear and discoloration to recto at top right corner. This lot will be accompanied by a Typed Letter Signed from BUZZ ALDRIN.

Inscribed "Flown to the Moon on Apollo XI," and SIGNED BY "BUZZ ALDRIN" to recto

This data card was attached to the Command Module cockpit instrument panel in case a second attempt at firing the third stage (S-4B) of the Saturn V launch vehicle were necessary. After a failed first attempt, the crew would have orbited the moon again to try to figure out the problem and re-fire the launch vehicle. They would only have had two tries, as the hydrogen fuel boiled away in the Sun's heat and the third stage would not have had enough fuel to complete the Translunar Injection (TLI) burn.

BUZZ ALDRIN'S provenance letter reads, in part: "This SIVB TLI – Nominal Second Opportunity" data card gave us information on how the Translunar Injection (TLI) burn would function on the second attempt at firing the SIVB rocket engine. If the first attempt at TLI failed, we would have another orbit to figure out the problem and try again. We only got two attempts before the hydrogen fuel boiled away in the Sun's heat and the 3rd stage would not have enough fuel to complete the TLI burn by the time of a third try.

This data card would be attached to the Command Module (CM) cockpit panel during the second try at firing the 3rd stage (SIVB) of the Saturn V launch vehicle. This second try would occur on the third orbit. The heading of the card states that it is the SIVB (3rd stage of the Saturn V launch vehicle) and the pre-printed numbers on the card reflect what would be a normal attempt at Translunar Injection. The TLI firing would occur on the day of the launch, July 16, 1969, with a launch azimuth of 72° (or northeast from the launch site). That allowed for the TLI to take place at what was deemed the proper location in orbit. "SECOND OPPORTUNITY" simply meant the second try at the TLI burn during the third orbit. "DET" stands for Digital Event Timer. This was on the Display and Keyboard (DSKY) user interface of the Apollo Guidance Computer (AGC) and timed the burn from start to finish. The "Theta" symbol indicates the Flight Path Angle of the CSM/LM stack in relation to the Earth. The "Psi" symbol indicates the heading of the stack. "VI" represents the spacecraft velocity increments at certain times during the burn. This allowed the crew to compare the velocity on the data card with the velocity numbers being generated by the computer during the burn. Note that at the end of the burn the predicted velocity was 35,575 feet per second. "H-Dot" or dot-over-H was the time derivative of height. It is calculus that concerns velocity and time to get to a certain height. The burn would have started at an altitude of 109 miles above Earth and was supposed to reach an altitude of 170 miles at the end of the burn. The actual altitude at the end of Apollo 11's TLI burn was 177 miles."