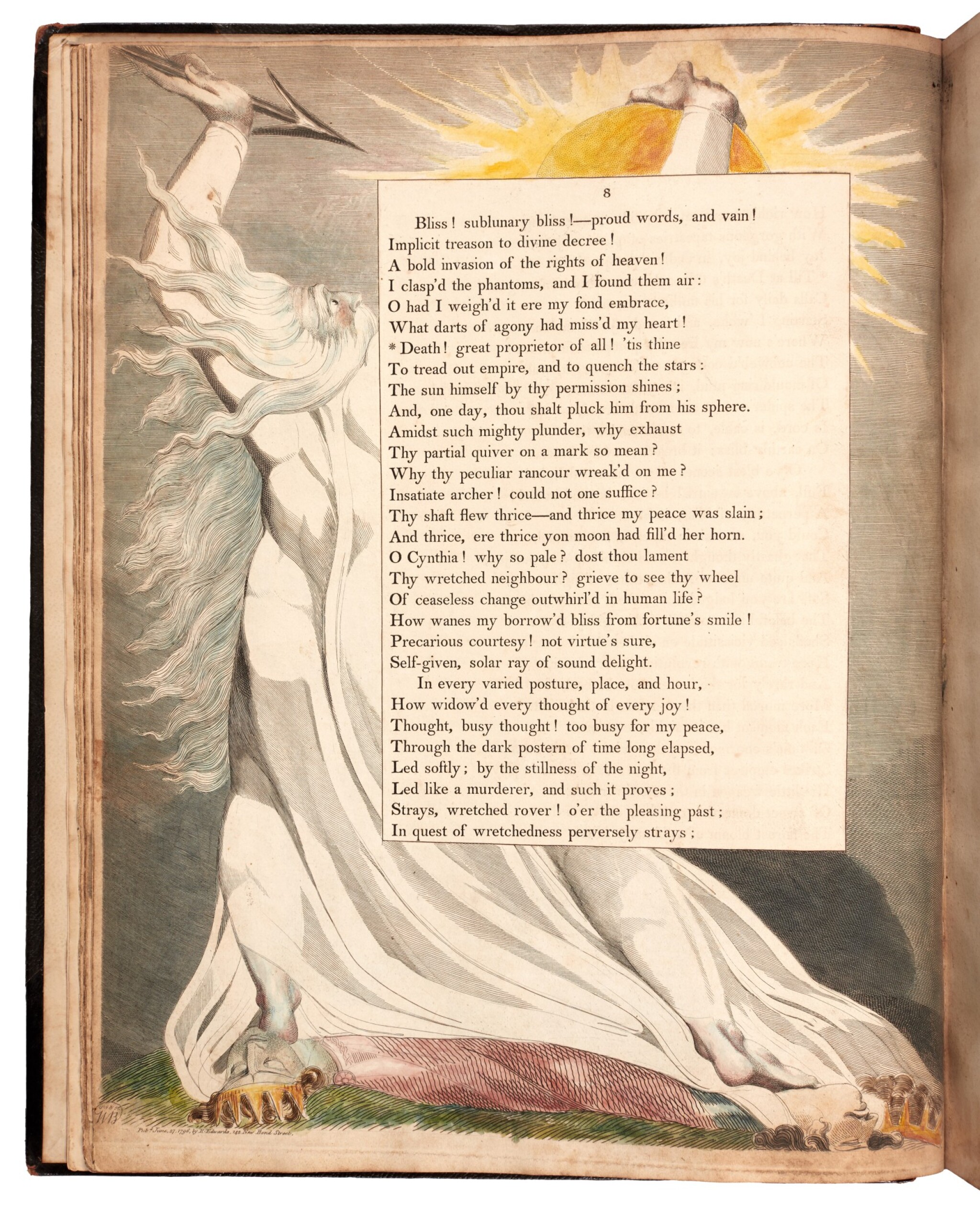 The Complaint, and The Consolation; or Night Thoughts. London: R. Noble for R. Edwards, 1797

A HAND-COLOURED COPY OF BLAKE'S GREATEST COMMERCIAL PROJECT. A prospectus published early in 1797 outlined the ambitions of the project: "These engravings are in a perfectly new style of decoration, surrounding the text which they are designed to elucidate." Blake produced 537 watercolours illustrating the whole of Young's poem, far more than could ever have been used in the edition. The plan was to publish this ambitious illustrated work in four parts, beginning with this first part containing 43 engravings by Blake, based on his watercolours. However, Richard Edwards, the publisher who had commissioned Blake, closed his business after only this first part had been published.

28 hand-coloured copies of the book are known. They have conventionally been divided by style into two groups: an earlier group (of which the current copy is an example) believed to have been coloured in 1797; and a slightly later group coloured in c.1805. Two copies in the 1797 group bear early inscriptions attributing the colouring to Blake himself, allowing the colouring of the rest of the group also to be attributed to Blake. The colouring in the present copy has more variation than most other Type I copies. It shows extensive use of pink and blue tones on exposed flesh, which is found on faces in other Type I copies.

G.E. Bentley only became aware of this copy in 1975, when Blake Books (1977) was already in galley proofs, so it is not included in his list of coloured copies, but it was included in the census of coloured copies found in John Grant's 1980 edition of Night Thoughts (copy I-15), where it is described with the following note:

"Only seventeen plates are coloured, with clear and vivid washes [...] the last design having touches of greenish yellow on the plant only. On p. 4 the washes on the foliage were apparently applied before the printing was completely dried, which caused the colour to run away from the lines and produced a slightly halo effect. In general, however, the quality of the painting is superior to most Type I copies, notably I-2, the Soane copy. Many of the sheets have been creased or repaired and are dirty. Because some of the creases correspond and because there has been paint transfer from non-contiguous pages it is conjectured that these sheets may have lain undbound for some time. The binding itself, which is in poor condition, appears to have been done in the mid nineteenth century and may be the first."

The following plates are hand coloured in this copy:

frontispiece of "night the first"

p. 19: "a skeleton discovering the first symptoms of re-animation"

p. 24: "our inattention to the progress of time"

p. 26: "the same power in his character of destroyer"

p. 31: "a good man conversing with his past hours"

p. 35: "a parent communicating instruction to his family"

Blind stamp of the Ipswich Examining Office of the Odd Fellows Manchester Unity Friendly Society ("...the duties of an Examining Officer were to examine and relieve members of the Society travelling in search of work; the members carried with them a Travelling Certificate which was embossed with the stamp in your copy. The Examining Officer in 1892 at Ipswich was James Ball - but of course I don't know whether he is YOUR examining officer...", G.E. Bentley, unpublished letter to owner, 25 June 1975 (copy included with lot)); purchased 1953 from E. Seligman by an English private collector; thence by descent