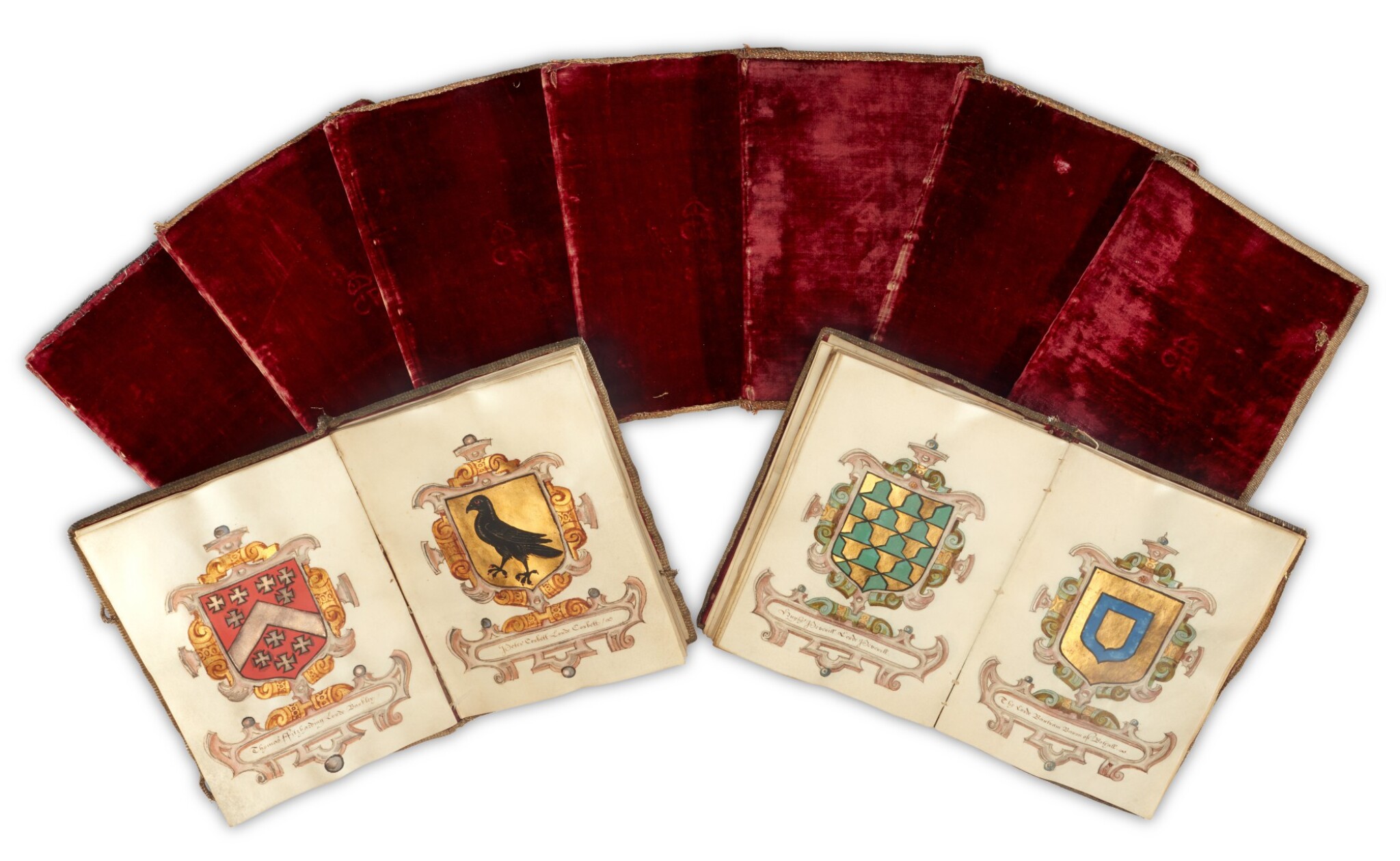 Each volume containing between 25 and 68 historic Coats of Arms painted in vivid emblazonry with gold, silver, and coloured inks, each also with a dedicatory title page with richly decorated border, 295 illustrated Coats in all on rectos and versos of c.160 leaves, on vellum, each volume uniformly bound in contemporary or possibly near-contemporary crimson velvet over pasteboards, edges of the boards covered with gold braid, two pairs of ties of gold thread with tassels, vellum pastedowns and endleaves, the upper cover of each volume stamped with the crowned cypher CR of King Charles I (stamped upside down on three volumes), the volumes comprising:

“the Armories of such of the Knightes of your most honorable ordre of the Garter as lyved in the tyme of […] Kyng Henry the Fifte”, illustrated with 26 coats of arms, small label (“no: 3 of them in quarto bound crimson Bookes 1639”), 1569, one bifolium nearly detached

“A booke conteyninge the true and perfect declaration of al the knights of the most noble order of the Garter […] In the tyme of […] Kinge Henry the fifte”, illustrated with 25 coats of arms, small label (“no: 5 of them in quarto bound crimson Bookes 1639”), 1570, with four gold silk ties

“A Booke conteyninge the trewe and perfect declaracion of the the knightes of the most noble order of the Garter which were electe and Installid […] in the tyme of […] king Henry the sixt”, illustrated with 30 coats of arms, small label (“no: 6 of them in quarto bound crimson Bookes 1639”), 1571, with four gold silk ties

“In this booke are depainted the Armes of all the Knightes of the most noble order of the Garter […] duringe the tyme of […] Edward the fowerth”, illustrated with 29 coats of arms, small label (“no: 7 of them in quarto bound crimson Bookes 1639”), 1572, with four gold and silk ties

“A Booke of all the Earles and Barons, which weare in the tyme of […] William the Conquerour”, illustrated with 68 coats of arms, small label (“no: 12 of them in quarto bound crimson Bookes 1639”), 1577, upper joint split

“The Names and Armes of suche worthie Personages, as have been ennobled & advaunced to Honnor, by […] Kinge Henryte the Seconde and King Richard the Firste”, illustrated with 34 coats of arms, 1579, one bifolium loose and another nearly detached

“A Booke of all the Earles and Barrons which were in the tyme of […] Kinge John and Kings Henry the third”, illustrated with 30 coats of arms, 1580, three of four gold and silk ties

“the Armoyres of such of your knights of your most honorable Order of the Garter as lyved at one instants in the tyme of […] Kinge Henry the fourth”, illustrated with 25 coats of arms, undated, with inscription “No. 1 W: Dobyne :/ 1639” and small label (“no: 1 of them in quarto bound crimson Bookes 1639”), one bifolium nearly detached

[Barons and Earls of Henry I?], illustrated with 28 coats of arms, [n.y.], four gold and silk ties, lacking first bifolium with title page and reigning monarch’s arms, one bifolium loose

A RICHLY DECORATED SET OF MANUSCRIPTS AND A RARE AND EVOCATIVE REMNANT OF THE COURT OF ELIZABETH I. These armorials were presented to the Queen from 1569 to 1580 as gifts for New Year. The elaborate ceremony of New Year gift-giving was a central event in the calendar of the court, at which gifts were exchanged between the Queen and all echelons of her court. Several rolls recording these exchanges of gifts survive, giving a wonderfully rich record of the Elizabethan court in its opulence. The roll for 1578, for example, describes one of the manuscripts found in the present lot: "By Gilbert Dethick, alias Garter Principal King of Armes, a booke of the states in King William Conqueror's tyme – Delivered to Mrs Blanche." In the same year, the Earl of Leicester gave a bejewelled ornamental collar of gold, the Earl of Ormond a Phoenix jewel, the Duchess of Suffolk a velvet cushion “embrawdred of the story of Truth set with garnetts and sede pearls”, and Philip Sidney a “smock of camerick … wrought with blac worke … and a sute of ruffs cutworke” (Society of Antiquaries, MS 537).

Favourites and great aristocrats competed for attention through their gifts of ornate and often fantastical jewellery, whilst more humble servants of the crown celebrated their ongoing service by presenting appropriate gifts. A court musician might give lute strings; apothecaries often gave green ginger and orange flowers. It was a highly formalised occasion. Gilbert Dethick would have joined a throng of courtiers in the Presence Chamber on New Year’s day morning with a gift to present to one of the Queen’s personal attendants. Blanche Parry, for example, to whom Sir Gilbert Dethick gave his 1578 manuscript gift, was Keeper of Her Majesty’s Jewels and one of the Queen’s closest confidents – as a consequence she was also a regular gift-giver in her own right: her 1578 gift to her royal mistress was “a litill box of gold” for sweetmeats with an accompanying spoon. The courtiers would then have gone to the Jewel House for their return gift. No attempt was made on the part of the crown to make personalised gestures: everyone received silver gilt plate in a quantity determined by rank, and of a value that was rarely commensurate with the value of the Queen’s gifts.

Such was the context for which the present manuscripts were created. Every New Year the Queen would receive from Sir Gilbert Dethick, her chief herald, the Garter King of Arms, an illuminated volume of historic English coats of arms. These tended to be Knights of the Garter from previous reigns, or else English nobles from before the foundation of the order in 1348. They exhibited Dethick’s skill in limning heraldic achievements, and also his historical knowledge and ability to research ancient arms from the records of the College of Arms. Dethick (c.1500-1584) was a respected herald who had served three sovereigns before Elizabeth, and was a notable figure at court. He had fulfilled the traditional herald’s role of proclaiming messages from the monarch including on the battlefield; in the course of his duties he had nearly been shot by the Scots, and narrowly escaped hanging at the hands of rebels in Norfolk. He had also been sent on a number of diplomatic expeditions, including for negotiation of royal marriages, and was the first to establish a home for England’s heralds, the College of Arms. These annual gifts were a physical manifestation of his continuity of service.

The present group of volumes remained in the Royal Library from the time of their presentation throughout the reigns of James I and Charles I. During Charles I's reign they were each stamped with the crowned cypher CR of the King, and in 1639 they were listed and catalogued. The stamping (or possibly shaving) of the royal monogram on the velvet bindings by an unknown technique was evidently a Stuart invention (cf. James I's copy of Aelfric's A Saxon treatise, 1623, in Corpus Christi College, Oxford; Fine Bindings 1500-1700 from Oxford Libraries, Bodleian Library, 1968, no. 169), which later fell into disuse. One vellum pastedown has become detached and it can thus be seen that the velvet was backed with green canvas.

The last known record of the volumes in the seventeenth century is in one of the inventories prepared at the time of the 'Commonwealth Sale'. One of the commissioners for the King's library was Mr. Wheeler and it was in "An Inventorie of Goodes receaved from Mr Wheeler belonging to the late King vizt. In the small Truncke" that the books are listed and valued at £14: "17EN BOOKES OF ARMES OF KNIGHTS OF THE GARTER IN REDD VELLVETT CASES BOUND WITH GOLD GALLOONE" (The Inventories and Valuations of the King's Goods 1649-1651, Walpole Society, vol. 43, 1970-1972, ed. Oliver Miller, p.246).

The next reference to the volumes is in the ownership of Augustus, 1st Viscount Keppel (1725-86). The family archive contains "A Catalogue of the Library of the Right Honourable Augustus Lord Visc[oun]t Keppel deceas'd, at his Lordships Seat at Elden Hall in Suffolk, taken in April 1787". Under a general heading "Quarto" is the entry "In the Drawer at the Lefthand Window Arms of Earls and Barons from W[illia]m the Conqueror richly Blazond on Vellum 4 Vol; bound in crimson Velvet Arms of the Knights of the Garter blazon Vellum & bound in crimson Velvet 7 Vol;". Admiral Keppel had direct connections to the Stuart family, which probably explain how he came into possession of the volumes. His mother was the granddaughter of Charles II and his father, the second Earl of Albemarle, was christened William Anne as godson of Queen Anne. Augustus Keppel's library was left to his nephew the fourth Earl of Albemarle and formed the library at Quidenham Hall, Norfolk. They remained in the same line of ownership until their sale in these rooms in 1986.

A number of other such heraldic New Years’ gifts survive. The presentation manuscripts for 1564 is at the Beinecke Library of Yale University (MS 97), whilst the 1574 and 1575 volumes were presented to the Royal Library by Lord Albemarle in 1970. The 1591 volume, prepared by Sir Gilbert Dethick’s son and successor as Garter King of Arms, was offered in these rooms at auction on December 2005 and is now in an important private library.

THIS COLLECTION AFFORDS AN EXCEPTIONAL OPPORTUNITY TO ACQUIRE A GROUP OF ELIZABETHAN ROYAL BOOKS OF UNDOUBTED PROVENANCE.