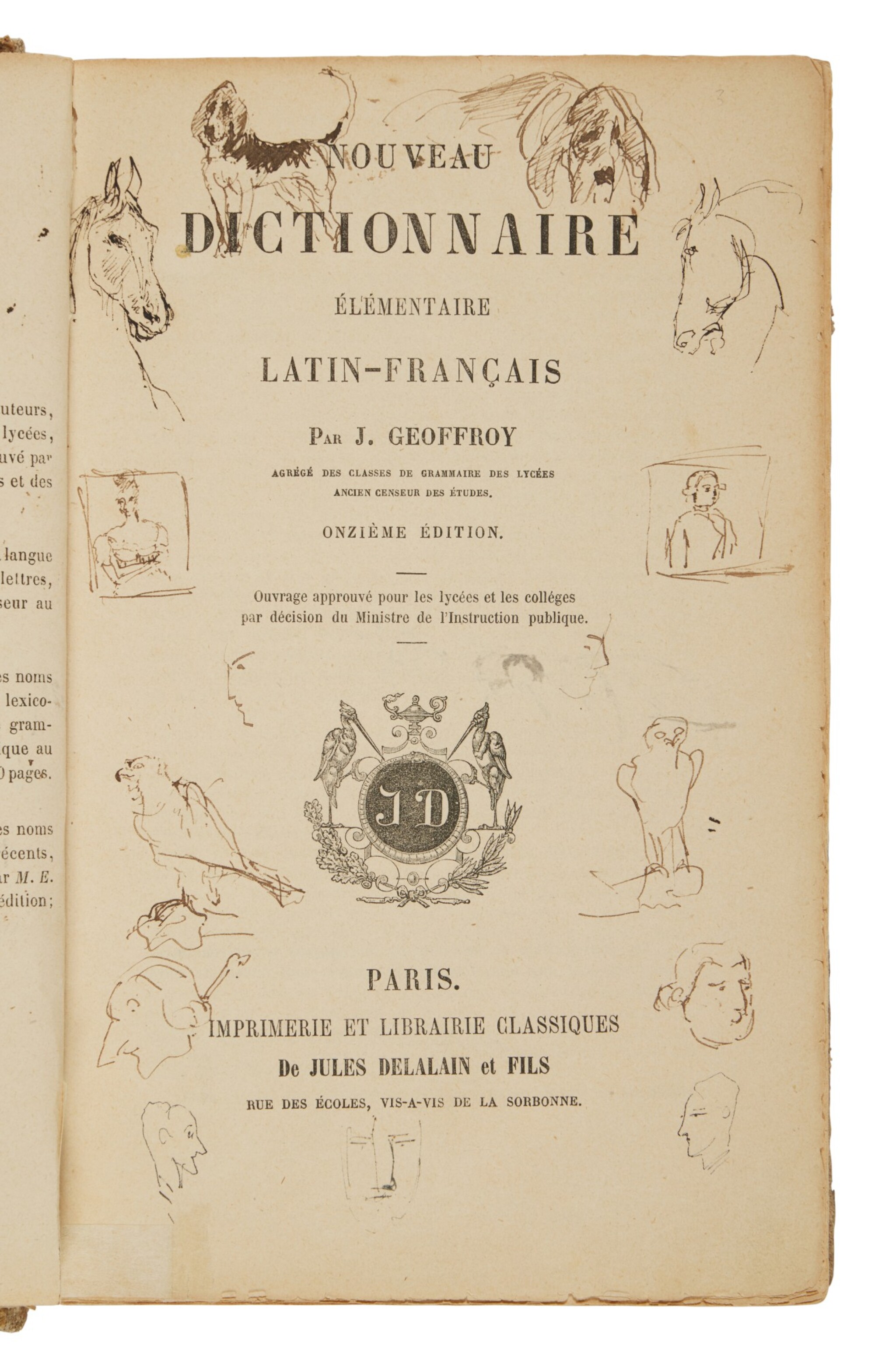 This remarkable collection of drawings was done by the sixteen-year-old Toulouse-Lautrec in 1880-81 in a dictionary he was using in preparation for his baccalaureate. He first sat for the examination in 1880, failed, tried again in 1881 and passed. In the interval between the two examinations, the bored pupil decorated the margins with these drawings. It was also in 1880-81 that Toulouse-Lautrec received his first art lessons, first from his uncle, Charles de Toulouse-Lautrec, and then from the painter René Princeteau, a friend of Lautrec's father through his great knowledge of horses.

These quick drawings reflect the adolescent artist's sharp powers of observations and the influences of his father, a falconer, and of Princeteau, a horseman. Falcons, horses, and beagles all adorn the title-page. It is the horses, however, whose lively presence is felt most on page after page. After looking through this volume in 1955, Aldous Huxley wrote, "... when the learned foolery of grammar and versification became unbearable, he would ... dip his pen in the ink and draw a tiny masterpiece. Dictionnaire Latin-Français. Above the words is a cavalryman galloping to the left, a jockey walking his horse towards the right. Coetus and Cohaerentia are topped by a pair of horse's hoofs, glimpsed from the back as the animal canters past. Two pages of the preface are made beautiful, the first by an unusually large drawing of a tired old nag, the second by a no less powerful version of the three horses in tandem which adorned the flyleaf." Lautrec's great lithographs of horses, particularly Partie de compagne, are clearly foreshadowed in these images.

Lautrec's love of the theatre and the music hall first appear here in the form of court jesters, female acrobats in tights, and personages in vaguely medieval costume.

On the first pastedown, two quatrains in Toulouse-Lautrec's hand appear among the drawings. The first reads:

(If, driven by a demon

you steal this book

know that no rascal

The other verse, written in a combination of Latin and French, appears below a drawing of a pierrot hanged on a gallows, saluted by a dapper gentleman in a top hat. The verse says, "Look at Pierrot hanged, who did not return the book; if he returned it, he could not have been hanged." The front cover has also been inscribed by the artist, "H. de Toulouse-Lautrec. Dictionnaire Latin" and has been boldly initialed "T.L."

The present volume is believed to be the only surviving textbook decorated by the young Toulouse-Lautrec. In summarizing the lively spirit of these early drawings, Huxley wrote, "Even as a boy, as yet completely ignorant of the masters under whose influence his mature style was to be formed, Hokusai, Degas, Goya, even in the margins of his Latin dictionary he was making manifest the vitalizing spirit in the movements of life."

A remarkable collection of drawings by the young artist