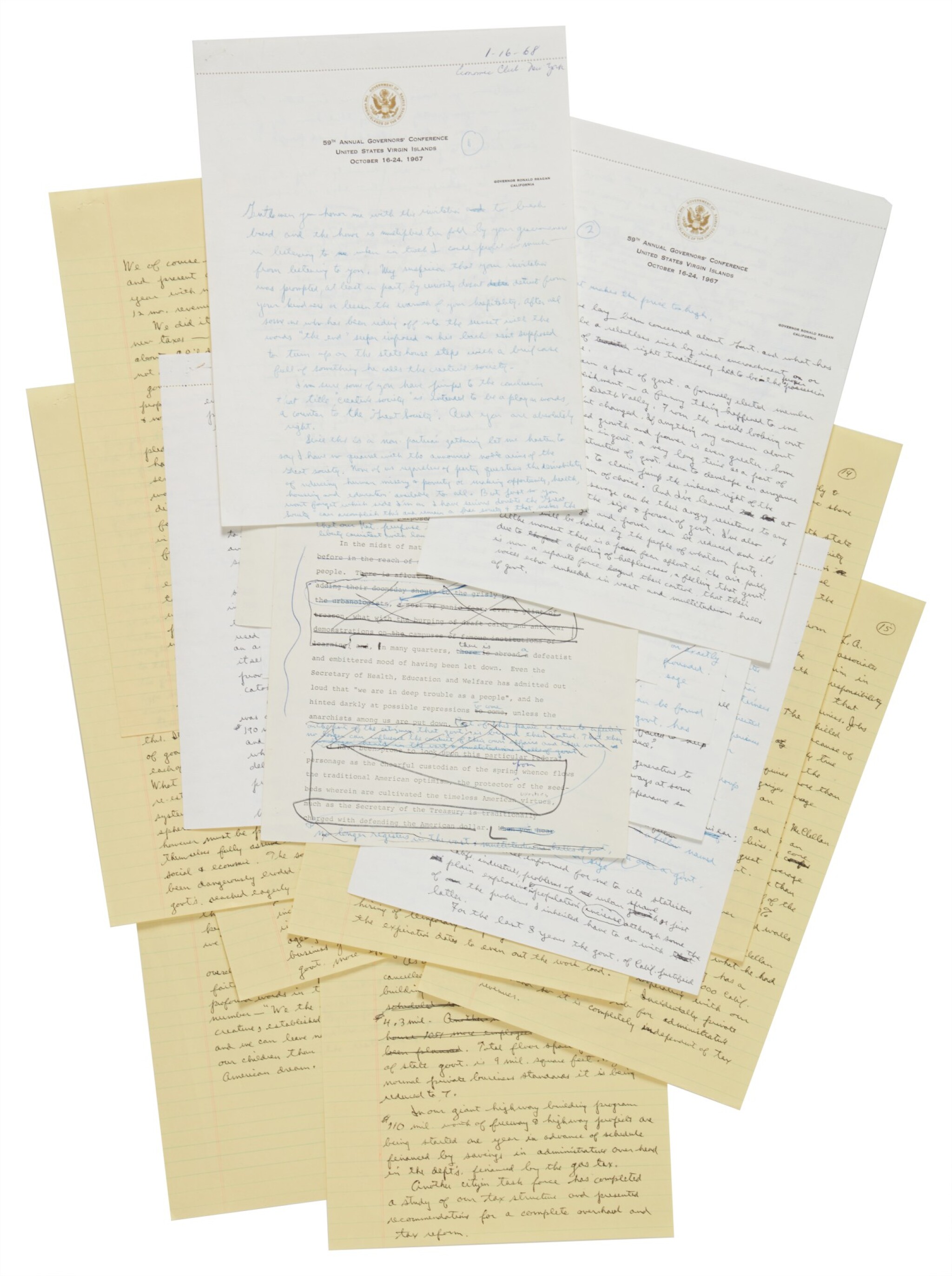 Autograph draft manuscript, written as Governor of California, of his speech before the Economic Club of New York, 17 January 1968

20 pages (various sizes) on 18 leaves of a variety of papers, including letterhead from the 59th Annual Governors' Conference | United States Virgin Islands | October 16–24,1967 and ruled yellow legal tablet paper. [New York,] 16 January 1968, being Reagan’s handwritten draft of his speech on this date to the Economic Club of New York; the first two leaves written on both sides, with Reagan’s preliminary version of pages 1 and 2 neatly crossed out, pages 3 and 5 photocopied typescripts with heavy emendations by Reagan and by another party; the remaining pages handwritten on the rectos only.

Reagan’s "Creative Society"—a coming-out address. Frugally using stationery left over from the October 1967 Annual Governors' Conference for almost half of this draft, Reagan describes his "creative society" for an influential Eastern audience. This speech, indeed, was Reagan’s first formal public appearance in New York after his retirement from the film industry. The meeting at the Grand Ballroom of the Waldorf-Astoria was part of Gov. Reagan’s nationwide tour as a professed “noncandidate” in the Presidential race, a tour undertaken to raise funds and enthusiasm for the Republican party in that election year. This was Reagan’s chance to introduce himself to the financiers and businessmen who formed the Economic Club, and he shrewdly opens his address by alluding to the doubts many in the audience may have about his qualifications for public office: "Gentlemen you honor me with the invitation to break bread and the honor is multiplied ten fold by your graciousness in listening to me when in truth I could profit so much from listening to you. My suspicion that your invitation was prompted, at least in part, by curiosity doesn’t detract from your kindness or lessen the warmth of your hospitality. After all, someone who has been riding off into the sunset, with the words ‘the end’ superimposed on his back isn’t supposed to turn up on the state house steps with a briefcase full of something he calls the creative society."

Still anticipating and disarming possible suspicions, he continues: "I am sure some of you have jumped to the conclusion that that title ‘creative society’ is intended to be a play on words, a counter to the 'Great Society.' And you are absolutely right. Since this is a nonpartisan gathering let me hasten to say I have no quarrel with the announced noble aims of the Great Society. None of us regardless of party questions the desirability of reducing human misery and poverty or making opportunity, health, housing, and education available to all. But just so you won't forget which side I’m on I have serious doubts the 'Great Society' can accomplish this and remain a free society and that makes the price too high."

Reagan recalls his longtime concern as a private citizen over "what has seemed to be a relentless inch by inch encroachment on or usurpation of rights traditionally held to be the proper possession of the people. Now I am a part of govt. a formally elected member of the establishment—a funny thing happened to me on the way to Death Valley. From the inside looking out the view hasn’t changed. If anything my concern about Govt.’s increased growth and power is even greater. Some who have been in govt. seem to develop an arrogance that leads them to claim jump and inherent right of the citizen to freedom of choice. And I’ve learned at first hand how savage can be their angry resistance to any attempt to reduce the size and power of govt. I’ve also learned, that size and power can be reduced and it’s reduction will be hailed by the people of whatever party. At the moment there is a panic fear afloat in the air, partly due to a feeling of helplessness, a feeling that govt. is now a separate force beyond their control, that their voices echo unheeded in vast and multitudinous halls of govt."

Speaking in the first month of the year that would come to symbolize American unrest and dissent in the 1960s, Reagan cites the symptoms of that malaise. "It is not in my mind," he points out, "to blame the govt. of the hour for all the evils that presently beset us; for the uncertainties that blur American prospects; and for the dissensions within that have made shambles of the American meaning in the world. The fault lies with all of us. As a Nat. we let ourselves be gulled into believing that tolerable solutions to our problems would be forthcoming in good time; that the Am. productivity and inventive genius would yield the essential means for surmounting all our difficulties, whether in the slums of America or in the rice paddies of S.E Asia. We were to have an instant tomorrow for a dollar down and heaven only knows how much a month."

He goes on to attack the "New Economics" and to quote Macaulay’s advice to political leaders: "Our Rulers will best promote the improvement of the people by confining themselves to their own legitimate duties, by leaving capital to find it’s most lucrative course, commodities their fair price, industry and intelligence their natural reward, idleness and folly their natural punishment." And he anticipates the message that would become more familiar in his speeches and writings as his nationwide reputation increased: "What is there to be said in defense of a govt. which while presiding over a society capable of producing goods and services in the value of $800 bil. annually and leading the rest of the world in technology, no longer is able to let its citizens travel and do business freely in the world simply because the govt. itself failed to keep its means and its programs in financial balance? It is fine and necessary for changing generations to dream and cast up new visions of society. But always at some point, the accountants have to put in an appearance so that the books can be honestly balanced. The only sensible course of action is for the govt. to face up and deal bravely with the primary cause of the trouble–the top heavy spending programs and the extravagant credit policies that have brought inflation back."

Again shrewdly anticipating his audience's mood, Reagan shifts his focus: "So far I’ve talked about the private sector and its relationship to the Fed. govt. Believe me the temptation is to go on talking on a broad philosophical plane but some instinct warns me that the curiosity involved in your invitation was in some measure curiosity about Calif. it’s government and happenings recently in Sacramento." The governor begins with a summary of past fiscal policies in his own state, remarking: "The plain truth was Big Brother in Wash. has a philosophical little brother in California. When Wash. sneezed the gesundheit was heard in Sacramento.” He recounts the steps taken by his administration to restore financial responsibility to his state, citing “simple common sense” steps taken to reduce government expenses at the state level, even down to this example: “Not all the savings were in the mil. dollar class. In my own office there was a sizeable supply of stationary bearing a name other than my own. Custom decreed it should be burned. Somehow the thought of all that unused stationary adding to the smog seemed shamefully wasteful. Now the girls in the office X out the other name and type mine in–and do you know I get a certain amount of pleasure out of that."

But he reminds his audience that "a Creative Society must do more than that. … The Creative Society is concerned with state responsibility. There are problems in our society which require attention and action. This action I believe should be taken at the state level where a relatively thorough understanding of the problem exists. … Finally the Creative Society demands and requires the participation of all the members of society. It recognizes that no govt. Can possibly find or afford an elite group of individuals capable of making decisions affecting the market place, the home and all or even part of the many facets of our daily lives. It recognizes instead that a society will be as great as the potential of its people and therefore govt. must call upon the genius and the ability of the people in the solutions on problems."

Reagan ends on a characteristically optimistic note: "For every unsolved problem there are ten people out there eager to help if someone will only point the way. By out there I don’t mean in Calif.—out there all over America. The Creative Society is govt. of and by as well as for the people. … We can remind ourselves and those in govt. who’ve lost faith in the simple verities that the most profound words in the Const. are but three in number— 'We the people.' Govt. is our creature, established by us for our convenience and we can leave no more valuable legacy to our children than the restoration of the American dream."

Ronald Reagan may not have been running for president in 1968, but eight years later he mounted a strong, but ultimately unsuccessful campaign for the Republican nomination against the party's incumbent, Gerald Ford. Four years after that, in 1980, he won the first of his two terms as chief executive.

This is the longest, as well as one of the most significant, autograph manuscripts by Reagan that we can trace in the auction records.