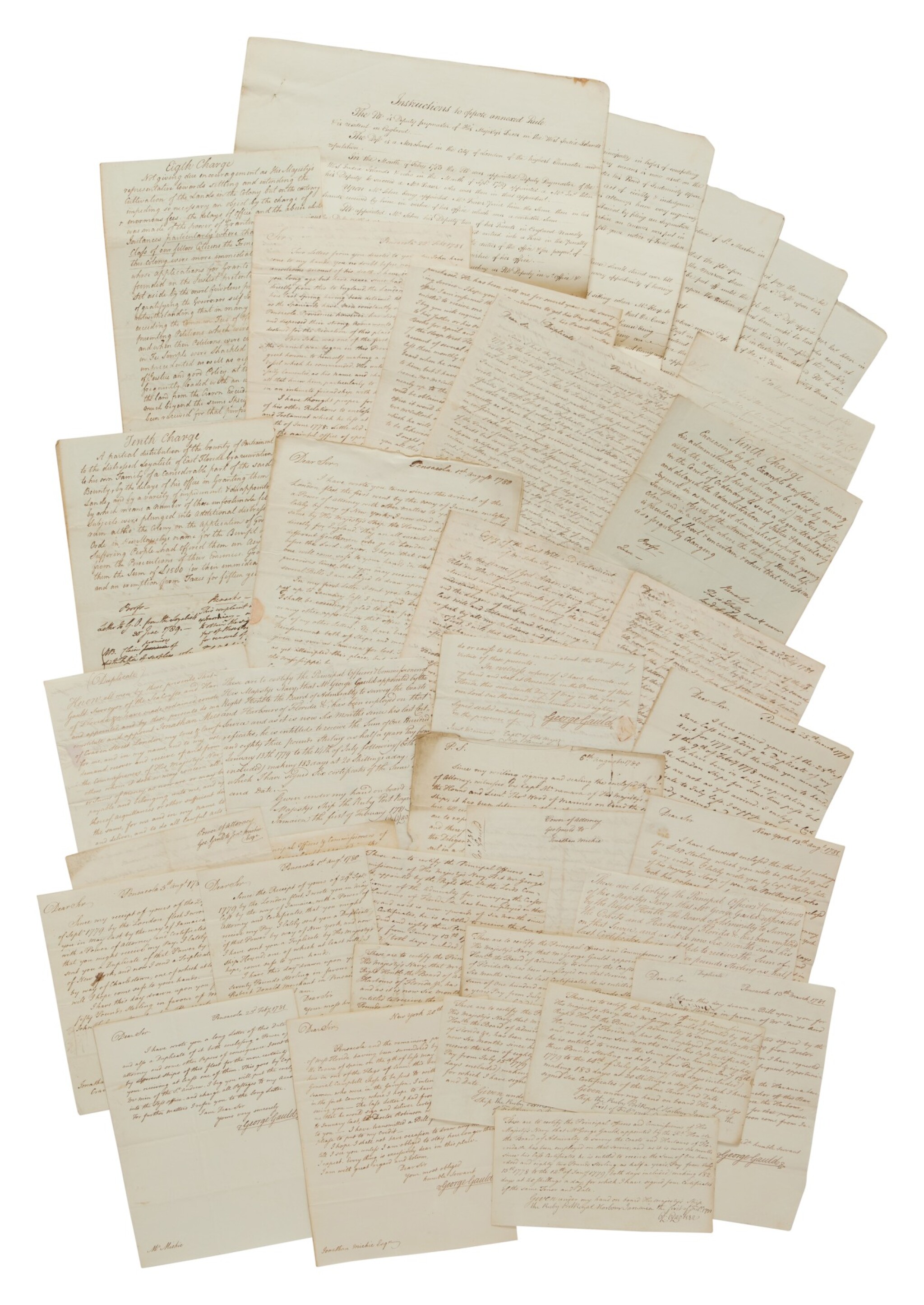 A group of 33 autograph documents (various sizes, ranging from 130 x 205 mm to 371 x 230 mm), single leaves and folios, comprising 66 leaves in total, those by Gauld signed ("George Gauld") and those by Sir Peter Parker signed ("P: Parker"); old folds, several leaves variably browned and smudged, a few marginal chips, only one with minor loss to text.

A fine archive concerning the George Gauld's work surveying the coast of Florida, including detailed letters concerning naval affairs during the American Revolution. Between 1764 and 1781 Gauld was assigned to chart the waters of the Gulf Coast off the colony of British West Florida, which comprised parts of what are now Florida, Alabama, Mississippi, and Louisiana. Though his work was undertaken for the British Empire, Gauld believed it to be a benefit to all nations, and freely shared the work with others, including the American Philosophical Society, to whom he gave "A General Description of the Sea-Coasts, Harbours, Lakes, Rivers etc of the Province of West Florida." Present at the siege of Pensacola, he was taken prisoner, sent to Havana, and then conveyed to New York before being repatriated to England, where he died shortly after.

Among numerous others, the present archive includes:

Twelve autograph letters on sixteen pages, folio and 4to, Pensacola and New York, 1 August 1780 to 13 August 1781, all signed by Gauld, to Jonathan Michie; two marked as duplicate, one with autograph copy appended. In addition to discussion of legal and financial matters, Gauld shares news of the war in Pensacola: "... We have been long in hopes of a Reinforcement both of Ships and Men, but it seems they have given us over at Jamaica for lost. The Spaniards have not as yet attempted this place, but they have taken Mobile and the Mississippi ... The Spanish Armament from the Havanna have been for some days past at Anchor off this Bar, but have not as yet attempted to force the Harbour, though they have had a fair wind for that purpose. We are in hopes that a fleet will soon come from Jamaica to our assistance ..." The later letters were written following his conveyance to New York: "... I am still waiting here impatiently for a Convoy to London, which I hope will soon happen. New York is excessively dear to live at. About 3000 German troops arrived here two days ago under convoy of his Majesty's Ship Amphion and two armed Ships. Several Rebel Prizes are daily sent in here by the Cruizers and Privateers. In the course of last week no less than eight have been brought in, among which is the Trumbull a congress frigate of 32 Guns and the Belisarius a very fine Ship belonging to Salem of 24 Guns. It is said there are only two Frigates remaining of the Continental Navy ... I should be very glad to see them brought in before I leave New York ..."

Nine certificates on eight pages, signed by Admiral Sir Peter Parker, attesting to "the Principal Officers & Commissioners of His Majestys Navy, that Mr George Gauld appointed by the Right Hon.ble the Board of Admiralty to Survey the Coasts and Harbours of Florida &c" is due half a year's pay.

A two page folio copy of John Payne's will, dated 1 June 1778, Pensacola. Payne was Gauld's close friend and is the other principal focus of the present archive. It notes that it is "to be opened by Mr Gauld at my death" and appoints Gauld as his executor, "... being sensible of the Debt I owe to Mr George Gauld of the Town of Pensacola, and well assured he will cause that Justice to be done to this my Last Will and Testament, I do hereby give and devise unto him my said Executor, all other Lands, Goods, Chattles, Moneys due to me for my Services to the Navy and all Charts in Manuscript, as well as all other writings ...")

Two-page autograph letter, docketed as a duplicate, to John Payne's homonymous father, forwarding a copy of his son's will and narrating his passing: "... Poor John was one of the first that fell a victim, when the Spanish War began in this Province; but he died with great honour to himself, making a noble defence of the King's Vessel which he commanded. His untimely death was universally lamented, as his name and character were endeared to all that knew him, particularly to me who had been happy in an intimate friendship with him for several years ..."