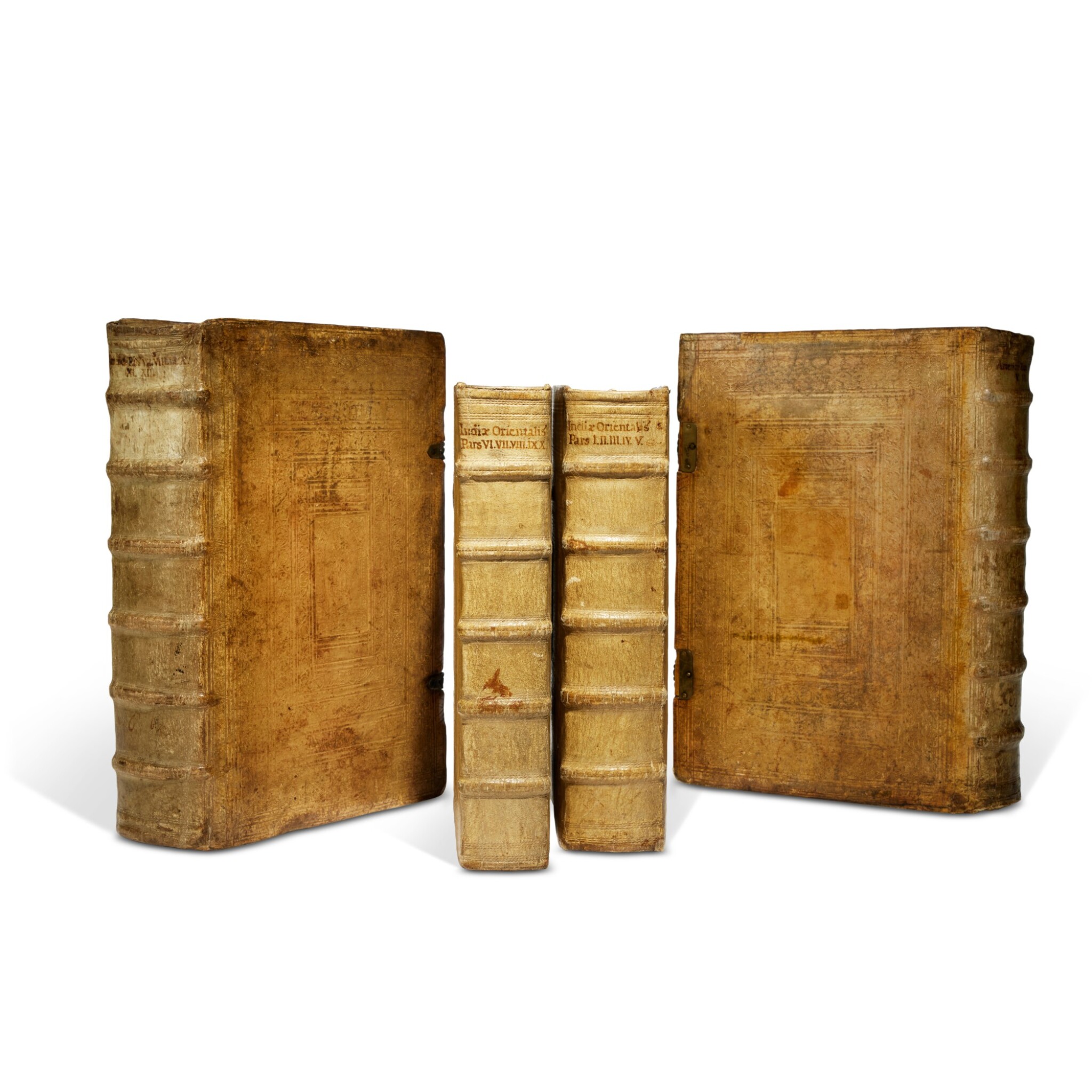 [The Great and Small Voyages]. Frankfurt and Oppenheim: Theodor de Bry and his heirs, 1590-1624

Theodor de Bry (1528-1598) first began the publication of this astounding collection of voyages following a visit to England in 1587. There he met the geographer Richard Hakluyt, who was then preparing his own depiction of voyages in the New World, and de Bry grew interested in the work. Hakluyt convinced him to publish his own collection of voyages; in support of this project, he helped de Bry to find representations of the Americas and gave him, once it was published, a copy of Hariot’s Virginia—which would become the first part of the Great Voyages, published in 1590.

He would go on to publish the next five parts from 1591 until his death in 1598. Following his death, his widow and sons, Johann Theodor and Johann Israel de Bry, continued his monumental work, issuing Parts VII and VIII in 1599 and Part IX in 1602. The latter was presumably intended to be the final part of the Great Voyages—given its title, Nona & postrema Pars—but Johann Theodor resumed the series seventeen years later, issuing Parts X and XI in 1619 and 1620, respectively, and de Bry’s heirs would go on to complete the series.

The works were astoundingly popular and influential, and the iconography disseminated through de Bry's compilation of travel narratives dominated the European view of the New World and the East Indies for more than a century after their publication. The exceptional ethnographic engravings in the first two parts are of special importance for the study of Native American life at the time of the first encroachment of Europeans. Throughout the set, however, many engravings include images of flora, fauna, and topography that provide interesting details about the way America looked in the sixteenth century and the way Europeans saw her.

The present set, assembled close to the publication date and in a striking contemporary binding, lacks only the final part of the Great Voyages, published in 1634, and the final two parts of the Small Voyages, published in 1619 and 1628. As most of the sets that appear at auction are typically in later bindings and compiled out of various copies, this set is both truly remarkable and rare.

Part XI. [Schouten, Willem, and Joris van Spilbergen]. Americae pars undecima: Seu description admirandi intineris a Guillielmo Schouten … peracti. Oppenheim: Hieronymi Galleri, 1619-[20]. Title with engraved vignette, map of the straits of Magellan tipped on to later guard (same as that of part IX), 2 folding maps of New Guinea and the South Sea (map of Mar di India bound in the previous part), 29 plates, F6, D6 and e6 are blanks; slight loss to corner of a1, short closed tear to foot of b1, the sixth plate with large spots. Church 172.

Part III. [Linschoten, Jan Huygen van, Cornelis de Houtman, and Gerrit de Veer]. Tertia pars Indiae Orientalis. Frankfurt: Mattheaus Beckerus, 1601. First edition. Engraved title surround, plan of Goa from part II inserted before A1, 3 folding maps, 61 engraved plates, plate [LX] present but not folding, including double-page view of St Helena and map of Nova Zembla on verso of plate 58, **4, X6, and q5 are blanks; title with chip to lower corner barely affecting engraving, plan of Goa with small separation at one fold, chip and short closed tear to lower corner of C3, plate XXXII with a pinhole at head and small separation at one fold, plan of Agra and map Descriptio Hydrographica supplied from another copy and tipped in on guards, the former with two small separations where tipped in, the latter reinforced on verso. Church 208.