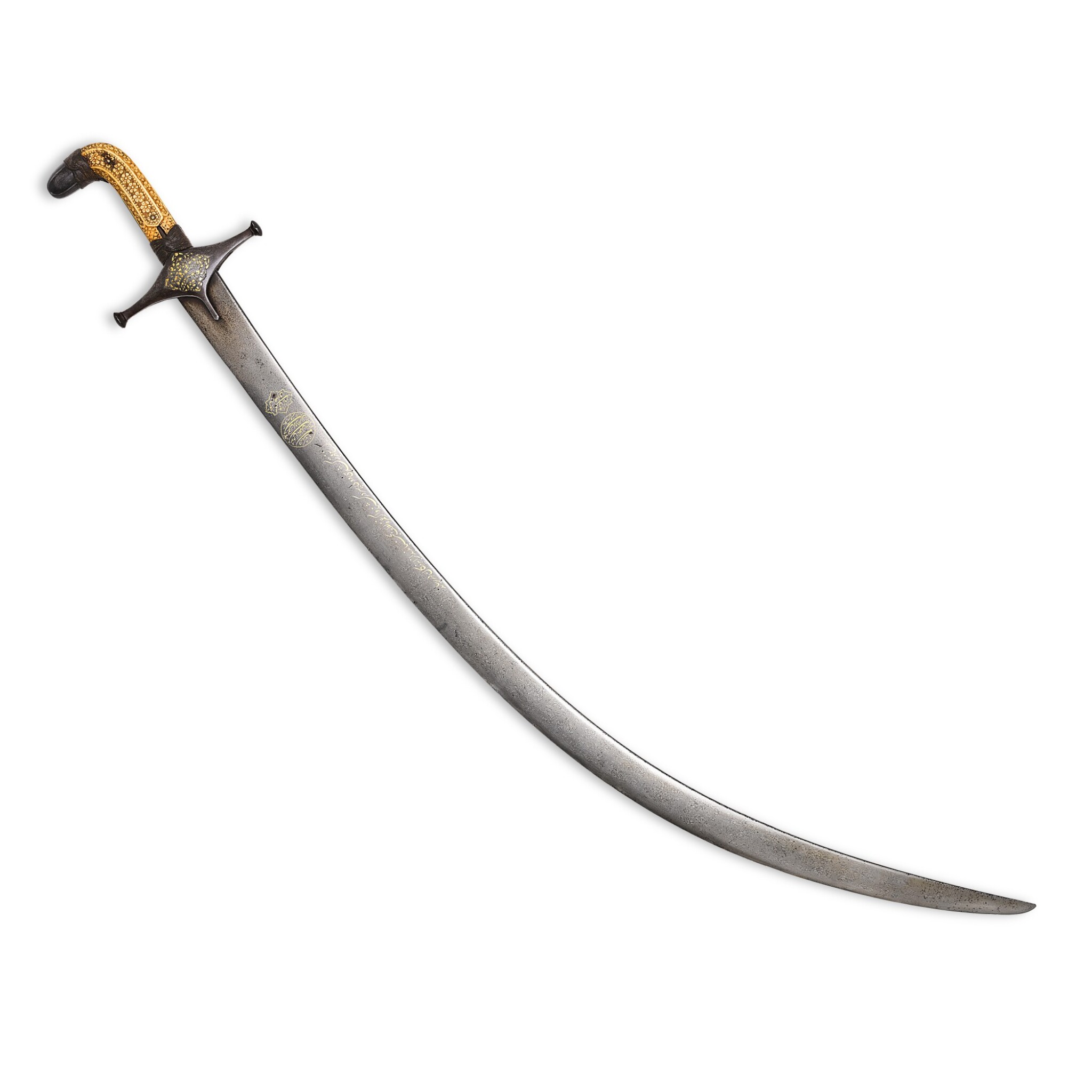 the slightly curved and finely watered steel blade with clear laddered steps (kirk narduban) cut into the watered pattern, inlaid with gold inscriptions in fine nasta’liq, the ivory hilt carved with floral decorations, the crossguard deeply cut on either side with a lobed, ovoid cartouche incorporating a nasta’liq inscription amidst interlacing spiralling vines on a gold ground

In overall good condition, the blade with minor oxidation, one minor nip, the inlay in good condition, rubbed only on very few letters as visible in the catalogue's image, the ivory hilt embellished with what looks like waxed leather stings, some dirt, stains and crack to the ivory, as viewed.

In the cartouches: ‘Sword of the Throne of Kingship, King of Kings Sultan Nadir, Lord of the Auspicious Conjunction, Master of Time, Lord of the Sea and Land/The Work of Mohammed Ali of Kirman, son of Sadeq’.

Along the blade: ‘When God draws the sword of wrath, prophets and saints draw in their heads, but if he casts a look of grace, he converts wicked into virtuous men’.

On the hilt: the bismillah.

Nader Shah was the founder of the Afsharid dynasty, and one of Persia’s most gifted military leaders. Born into poverty in 1688 and enslaved in his youth, he escaped and enrolled as a soldier under the chieftain of Afshar. His achievements as part of the revolution to restore the usurped Safavid dynasty led him to the top, and he ruled Persia from 1736-47. His extensive military achievements and vigorous expansion, from the Caucasus mountains to the Indus river, earned him the title of ‘Sword of Persia’ by modern historians (for further information on Nader Shah’s life and conquests, see Axworthy 2006). In fact, a number of swords have been associated with Nader Shah, most notably one within the Museum of Royal Jewels in Tehran (although the blade is in fact inscribed with Fath 'Ali Shah's name), and two others in the Nader Shah Museum in Mashhad. A further sword with nineteenth-century jewelled and enamelled mounts, offered in these rooms, 24 April 2013, lot 204, also bore a dedicatory inscription to Nader along the blade.

However, the present sword is the only complete example to present compelling evidence of its being a personal sword of Nader Shah. Other associations to his name on similar weapons, including those in Iranian museums, are more likely to be honorific. Here, the inscription bearing Nader’s name and titles stands within a circular cartouche and is finely executed, while the watered steel testifies of the blade’s high quality. The maker’s signature includes a Kirman nisba, a region historically known in early manuscripts and travellers accounts as a major fine steel-manufacturing centre. The Kirmani mines and arms workshops were still active under Nader Shah, until they fell into dereliction shortly after his death in the early Qajar period.

The quality of the blade in its patterning and perfect balance, equals that of the finest Persian swordmakers, and as such it stands as the lost representative of a region highly famed for its arms for over five hundred years. The finely executed inscription, dedicating the sword to Sultan Nader Shah and inferring direct ownership, makes this one of the most significant discoveries of Persian courtly arms in recent times.