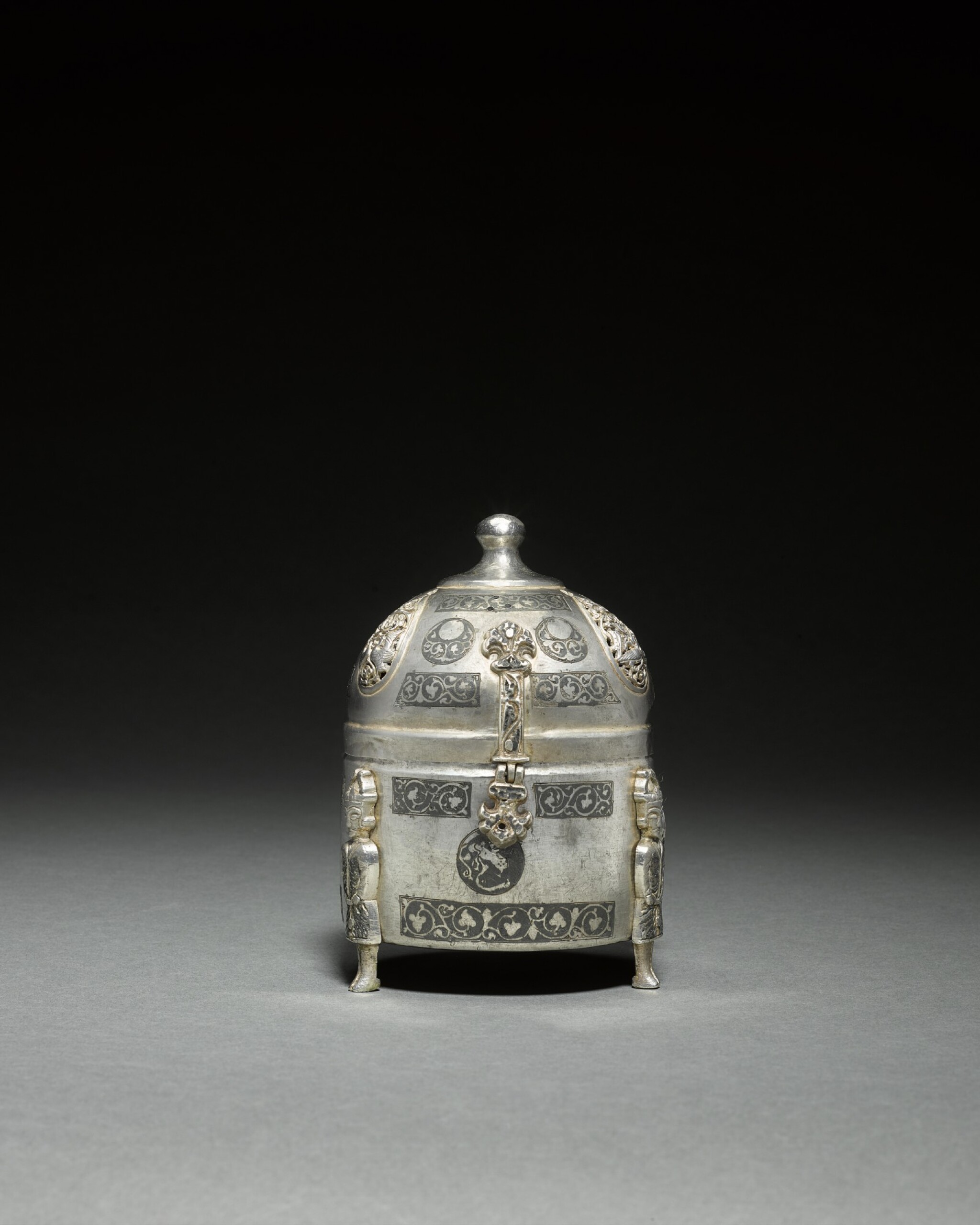 In good condition, some losses to the niello, minor oxidation to the silver, some residue of dirt in the grooves, a plaque to attach an handle probably added later, three groups of three holes on the lid over the cartouches which might have been done later, as viewed.

Acquired in the UK, 25 November 1995. According to the invoice it was previously purchased from from a European family in 1972.

This elegant incense burner belongs to a group of metalwork objects connected to the ‘Harari Hoard’ and which only recently have been object of further scholarly attention. Once owned by the collector Ralph Harari and now in the L.A. Mayer Museum for Islamic Art, Jerusalem, the ‘Harari Hoard’ comprises various silver objects found in a large jug in northern Iran, apparently hidden by a merchant on his journey from East Iran to the West. The collection includes jugs, bottle vases, incense burners and miniature caskets, all originating from eleventh/twelfth-century Iran, in excellent condition (see R. Hasson, Masterworks from the Collections of the L.A. Mayer Museum for Islamic Art, Jerusalem, 2000, p.41). The pieces combine engraved decoration with nielloed designs, combined with calligraphic bands and gilt details.

An article by Boris Marshak discussing an acquisition by the State Hermitage Museum has drawn further attention to this group of nielloed silver, which has been attributed to the second half of the eleventh and the beginning of the twelfth century in the region of of Central Asia (see B.I. Marshak, 'An Early Seljuq Silver Bottle from Siberia' in Muqarnas, vol.21, 2004, pp.255-265).

A lidded jug now in the David Collection, Copenhagen (inv. no.36/2017), displays very similar motifs to those found on the present incense burner. The two roundels enclosing a hawk attacking a duck (a motif repeated in openwork on the lid) are closely comparable to one on the main body of the David Collection jug, and both pieces share the similar decoration of half-moon roundels filled with scrolls on their lids. The present piece also relates to a nielloed silver jug sold in these rooms, 27 October 2021, lot 169. Although the incense burner lacks any calligraphy, the roundels to the sides and treatment of spirals in the nielloed ground bear close comparison.

The standing figures which extend as feet are an interesting decorative feature found on another metalwork piece from the twelfth century: a casket with combination lock dated 593 AH/1197 AD, attributed to Seljuq Iran, now in the Museum of Fine Arts, Boston, inv. no.55.1113, published in Weinstein 2015, no.35, p.64. The front of the box bears three applied gilt-brass figures similar to those affixed to the present piece. Further examples of these figures are also discussed in Pope 1938-39, p.2481, figs.810a-d.

A square silver fitting with a circular hole has been attached to one of the sides of the present piece, on top of the existing decoration, suggesting that the burner existed as a stand-alone object before having a handle attached (now lost).