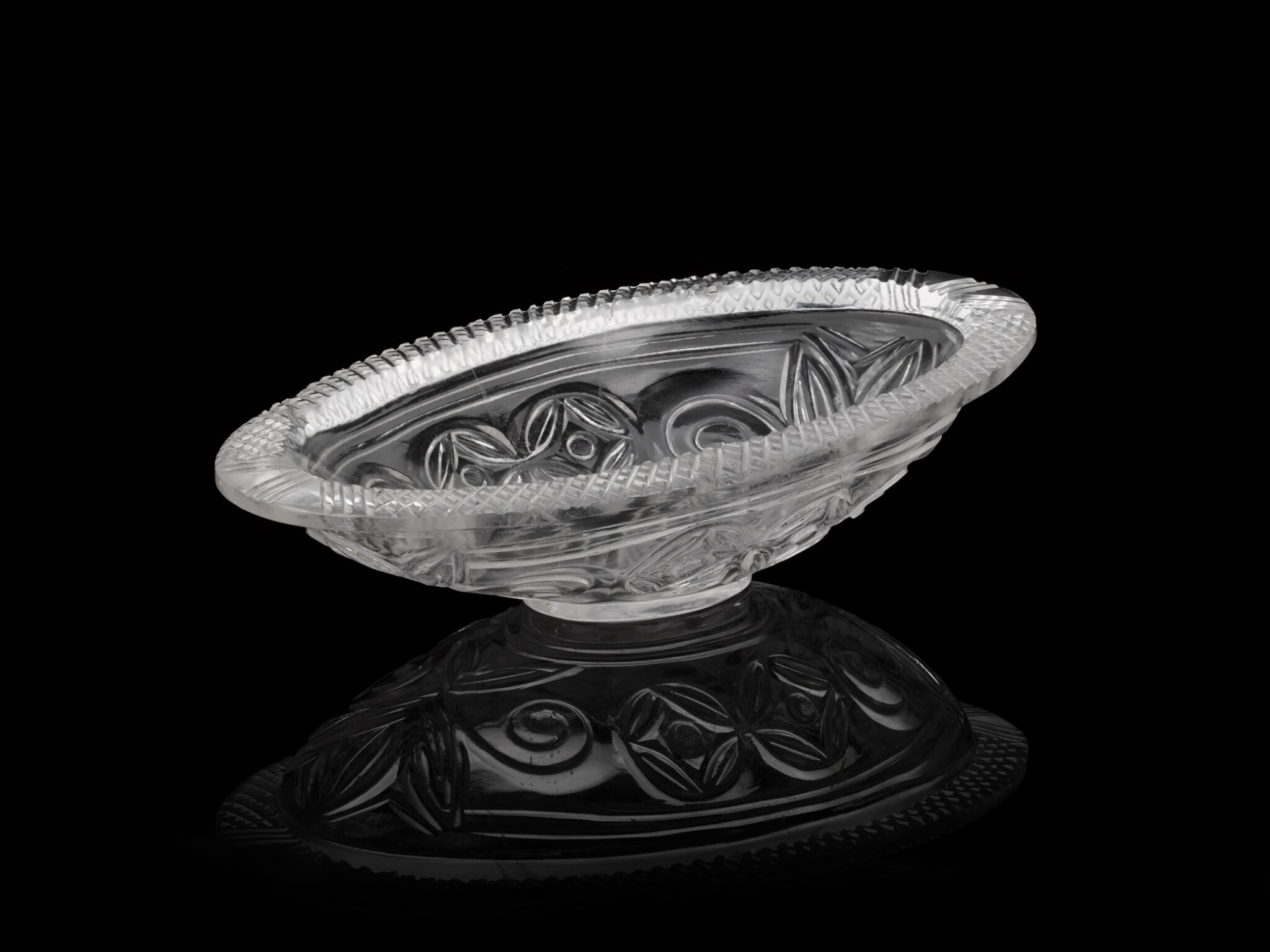 of oval shape standing on short foot, the exterior finely carved with a palmette with spiral volutes at each end, two squares within circles carved on each side, the everted flattened rim with a hatched pattern

In good condition, intact with only minor cracks visible against the light, which have not fractured the body of the bowl, the foot with a minor chip affecting one of the oblong ends, but the loss does not affect the balance of the bowl when it rests on the foot; some dirt visible in the grooves, as viewed.

As reported by al-Biruni (d.1048 AD), Basra was a major centre of rock crystal carving in Abbasid times and remained so until the advent of the Fatimids. This delicate bowl may have been made there and can be dated to the Abbasid period. The closest comparable is now in the Louvre, inv. no.SB 3795, and was excavated in Susa, in modern day Khuzestan provenance in Iran, towards the border with Iraq.

The similarities between this and the Louvre bowl are striking: they are both on a short foot and are decorated with a palmette with spiral volutes at each end of the oval-shaped body. The sides of the Louvre bowl has a hatching ground, the same pattern which here runs on the everted flattened rim.

The Louvre bowl has been set within a wide gold frame with S-shape design and was attributed by the Louvre to the Sassanian period. However, as previously noted by Raby, "Susa was razed to the ground by three hundred of Shapur II’s elephants, and only partially reinhabited by the late Sassanian period; in the early Abbasid period, on the other hand, it was once again a flourishing city" (Raby in Sotheby’s 1985 catalogue). It is thus more likely that the Louvre bowl was the product of the rich and sophisticated Abbasid court rather than the earlier Sassanian settlement. This attribution seems to be confirmed by the decorative motifs which are a closer link to early Islamic pieces. "The three motifs – the spiral volutes with a small flat-topped central boss, the thin oval cartouche with a raised spine, and the cross-hatching – appear on rock-crystal objects traditionally attributed to tenth-eleventh century Egypt. One of the closest parallels for the volutes and the oval cartouche can be found on a flask in the Freer Gallery, Washington, inv. no.F1949.14, which on stylistic grounds has been regarded as one of the earliest ‘Fatimid’ rock-crystals, and indeed a pre-Fatimid, either Tulunid (868-905 AD) or Ikhshidid (935-969 AD) date has been suggested for it’ (ibid).

Very few pieces of rock-crystal have been attributed with certainty to the Abbasid period and even fewer are so high in quality. Two small bowls, much cruder and thicker in carving, were offered at Christie’s London, 17 October 1995, lot 286 and Bonham’s London, 16 October 2003, lot 293. They were both attributed to Abbasid Mesopotamia. A small perfume bottle, also dated to tenth-century Iraq was sold at Christie’s London, 5 October 2020, lot 84.