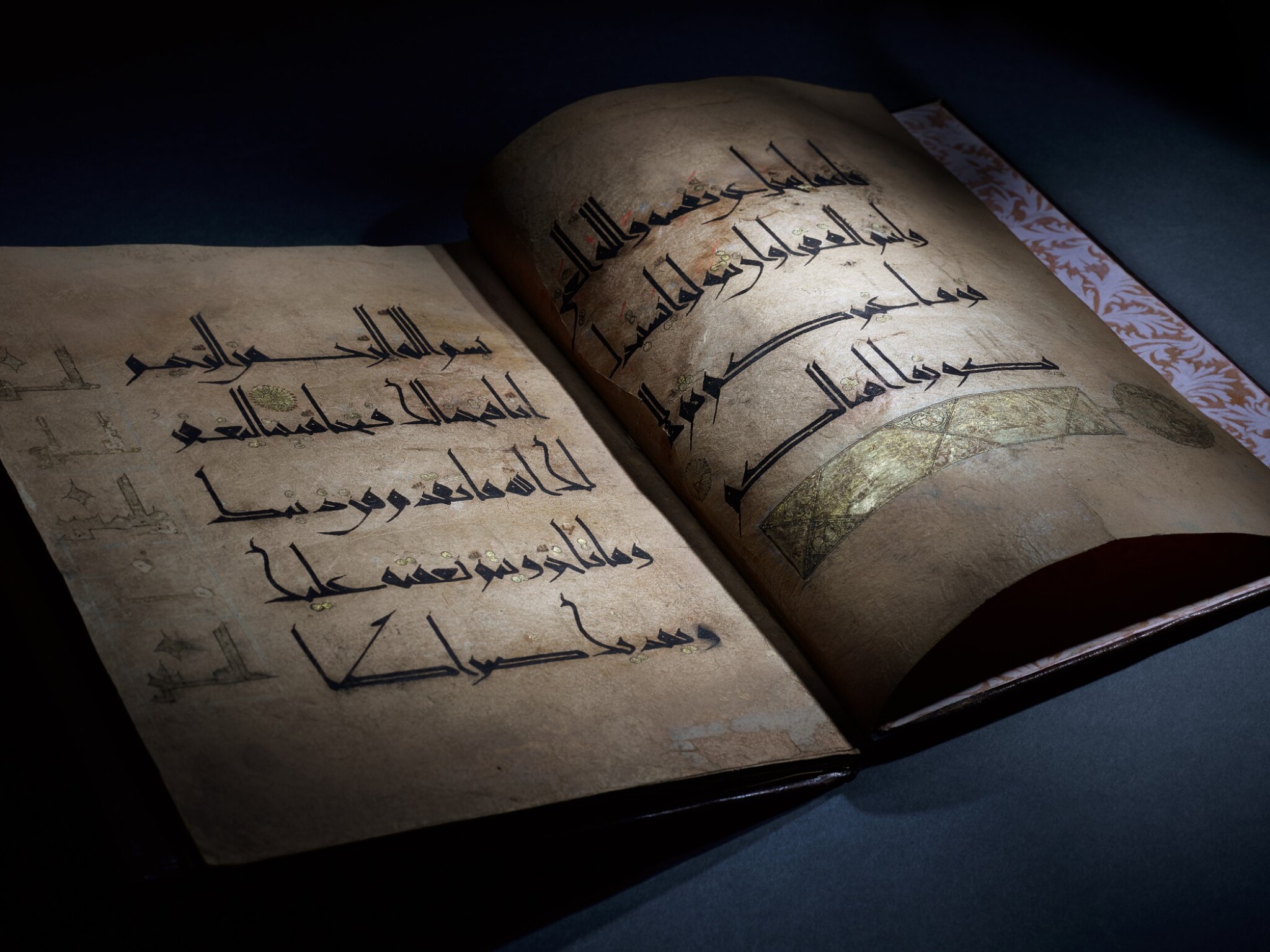 Arabic manuscript on paper, 12 leaves, 5 lines to the page, written in eastern Kufic in black ink with i’jam diacritics in gold, harakat diacritics in blue and red, verses separated by gold rosettes, the margins with two polychrome and gold geometrical verse markers, 2 surah headings written in gold within a gold and black cartouche ending with a roundel on the margin, incomplete, in later Ottoman light brown leather binding with central stamped ogival medallion, with flap

In fair condition, the paper has been restored and each page has been consolidated, with body-colour applied to the surface of the later repair and extended into and over the original paper. If compared to the catalogue image published in Sotheby's 13 October 1989, lot 79, plate XXXV, the original stained and damaged corners are visible. The text has some re-inking, various stains and smudges, some later annotations, lacking some pages as there are gaps between the verses (surah al-Fath XLVIII – missing between end of v.4 and end of v.6; between v.10 and the end of v.11; from the end of v.23 to the middle of v.25), losses to the gold and the illuminations, largely due to moisture, the binding associated and with minor damages, as viewed.

This Qur’an section appears to belong to an important and much-dispersed Qur’an, copied in 485 AH/1092 AD by a scribe known only as 'Ali. The original Qur’an, produced during the Ghaznavid period, was divided into 30 ajza’ and the present section shares many similarities with other fragments from the Qur’an. The manuscript can be linked to at least three other important contemporary Ghaznavid Qur’ans: the Qur’an of al-'Abdusi, completed in 1073; one made in 1091 for the Ghaznavid sultan Ibrahim ibn Mas‘ud (r.1059-98) and another copied circa 1100 in Bust (see a section sold in these rooms, 27 October 2021, lot 103). For wider discussion of this group of Qur’ans see Karame 2016, pp.108-161).

Fragments from this Qur’an have now been recorded in thirteen different institutions and collections (Fraser 2015). The Topkapi Palace Library (which houses the colophon) and the Bayerische Staatsbibliothek, Munich, each house a complete juz’, while single leaves or small sections, as in the present lot, can be found elsewhere. The measurements of the surviving sections vary but they are all roughly 26 by 20cm. They are written in Eastern Kufic, with gold i'jam diacritics outlined in black (to mark the consonants) and red and blue harakat diacritics (to mark the vowels). The verses are separated by gold rosettes outlined in black and occasionally decorated in red.

This section represents a part of juz’ 26 and begins with the end of verse 36 of surah Muhammad (XLVII). F.1b and f.12a each have a surah heading, comprising a gold rectangular cartouche with a roundel extending into the outer margin. The roundel of the first surah heading is bordered with lotus petals and contains three palmettes, similar to those on the leaf in the David Collection; the Museum of Fine Arts, Boston, and in the al-Sabah Collection, Kuwait. The roundel on f.12a is similar in design but consists of one palmette only bordered with a knotted design on a black ground, close to that of the surah heading on the leaf in the Aga Khan Museum, Toronto. The text within this last cartouche is interspersed with six different floral motifs, comparable to the those found in the section previously in a private collection in Tehran.

F.2a bears a vertical cartouche outlined in a feint blue containing gold Kufic outlined in black, giving the times of prayer, comparable to what can be seen running along the right border of the leaf now in the Metropolitan Museum of Art, New York, and the single cartouche on the margin of the David Collection leaf. The background decoration of the present cartouche has faded with time and moisture damage, but would probably have been red or yellow and would have included hatched designs. Two other cartouches are also found on f.12b.

Similarities in the script can also be seen across the various examples in other collections, including the way the lam/alif construction is written, sometimes with straight strokes, sometimes with rounded ones, as in the Chester Beatty leaf and the section sold at Sotheby’s in 1989. Other distinctive calligraphic characteristics of this Qur'an are the upper terminal lobes on the letter kaf and the thin diagonal trails extending from the top of the letters lam and alif. One also feels a certain sense of rhythm and letter-play in the layout of the pages and the choice of letter forms used.

Other leaves and sections from this Qur'an manuscript are listed as follows: