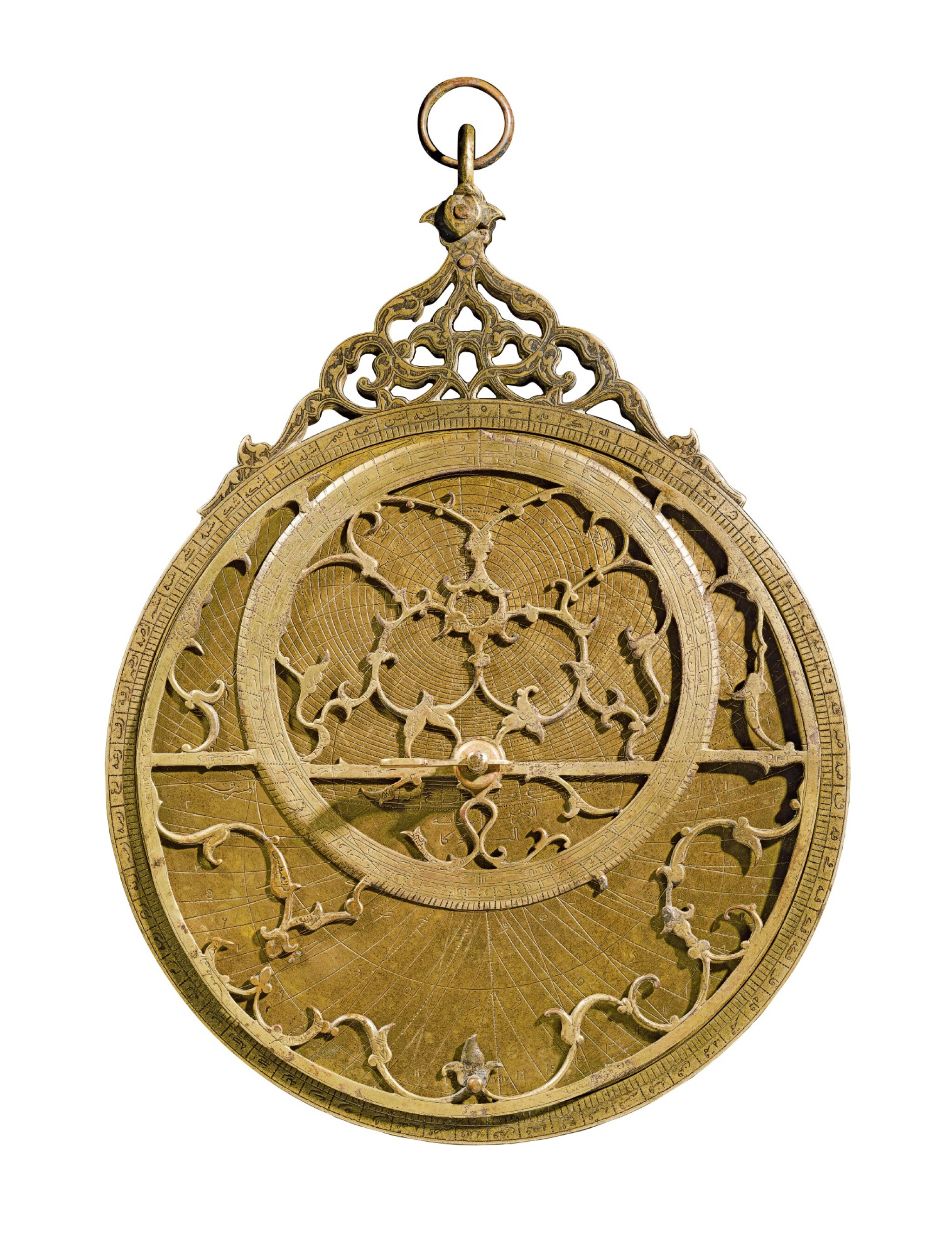 composed of a mater ('umm) cast in one piece with the high, symmetrically fretted kursi, the tracery of which is engraved with stylised leaf decoration, carrying a shackle and loop, containing five detachable plates and fitted with a bottom lug for locking the plates in place, openwork rete held in place with alidade and stylised 'horse'

In good overall condition, has had a light clean, replacement 'horse' to keep pin in place, the pin and the alidade with some corrosion, a few minor losses to the metal-openworked rete, some minor patches of oxidisation and rubbing to surface, each plate and reverse with some discolouration and oxidisation which is consistent with age, minor dents at extremities, minor scratches to surface, as viewed.

The inscription below the shadow squares translates as follows:

This is a fine and large example of production from the prolific family of astrolabists which flourished in Lahore from circa 1565 to circa 1675. It is signed by Diya' al-Din Muhammad, who was a representative of the fourth generation of the family. He is known by some two dozen astrolabes and sixteen celestial globes made between 1650 and 1660.

Diya al-Din was a fourth generation member of the most distinguished family of Mughal instrument makers. This ‘workshop’ was founded in the mid-sixteenth century by his great grandfather Ilah-Dad, the Court Astronomer to the Emperor Humayun. His grandfather, father and uncle, as well as his two cousins all continued in this family business until the end of the seventeenth century.

The throne is elegantly worked à jour. The shackle and ring are original. The rete is decorated with an intricate foliate design that achieves an elegant symmetry. It is distinguished by six closed shapes within the upper ecliptic. A part of the rete below the ecliptic has been lost, and the circumferential frame is distorted on the lower left. The star-names are written in a very small script and not all are discernible; we do not reproduce them here. The mater is engraved with a gazetteer giving longitudes and latitudes for 108 localities in Greater Iran and India.

The five plates are competently executed in careful detail. The standard-type plates for latitudes 22°, 25°, 27°, 28°, 32°, and 36°, have altitude circles for each 2° and azimuth circles for each 6°. There is also a plate bearing both markings for 0° and 90° on its two halves, another for latitude 66 ½ ° for converting ecliptic and equatorial coordinates, as well as a plate of half horizons organised in four batches.

The back bears the standard trigonometric and astrological markings of all astrolabes of the Lahore school. There is a sexagesimal trigonometric quadrant in the upper left and a solar quadrant in the upper right. The latter has two curves for the meridians of latitudes 27° and 32°, perhaps serving Jaipur and Lahore. Inside the double shadow squares is astrological information and a table of the function named fadl al-dawr. This is the excess of revolution (revolutio anni in medieval Latin) or the time measured in degrees of daily rotation (360° = 24h) by which the solar year exceeds 365 days. This function, of use in astrology, is tabulated in several medieval Islamic astronomical handbooks.

The pin and the alidade, which has suffered considerable corrosion, are original but the 'horse' for holding the ensemble together is missing. Another large astrolabe made by Diya' al-Din Muhammad, dated a year earlier than the present example, in 1068 AH/1657 AD, was sold in these rooms, 27 October 2020, lot 454.

Literature: Sarma, 'Lahore Astrolabists'; Sarma, The Archaic and the Exotic.