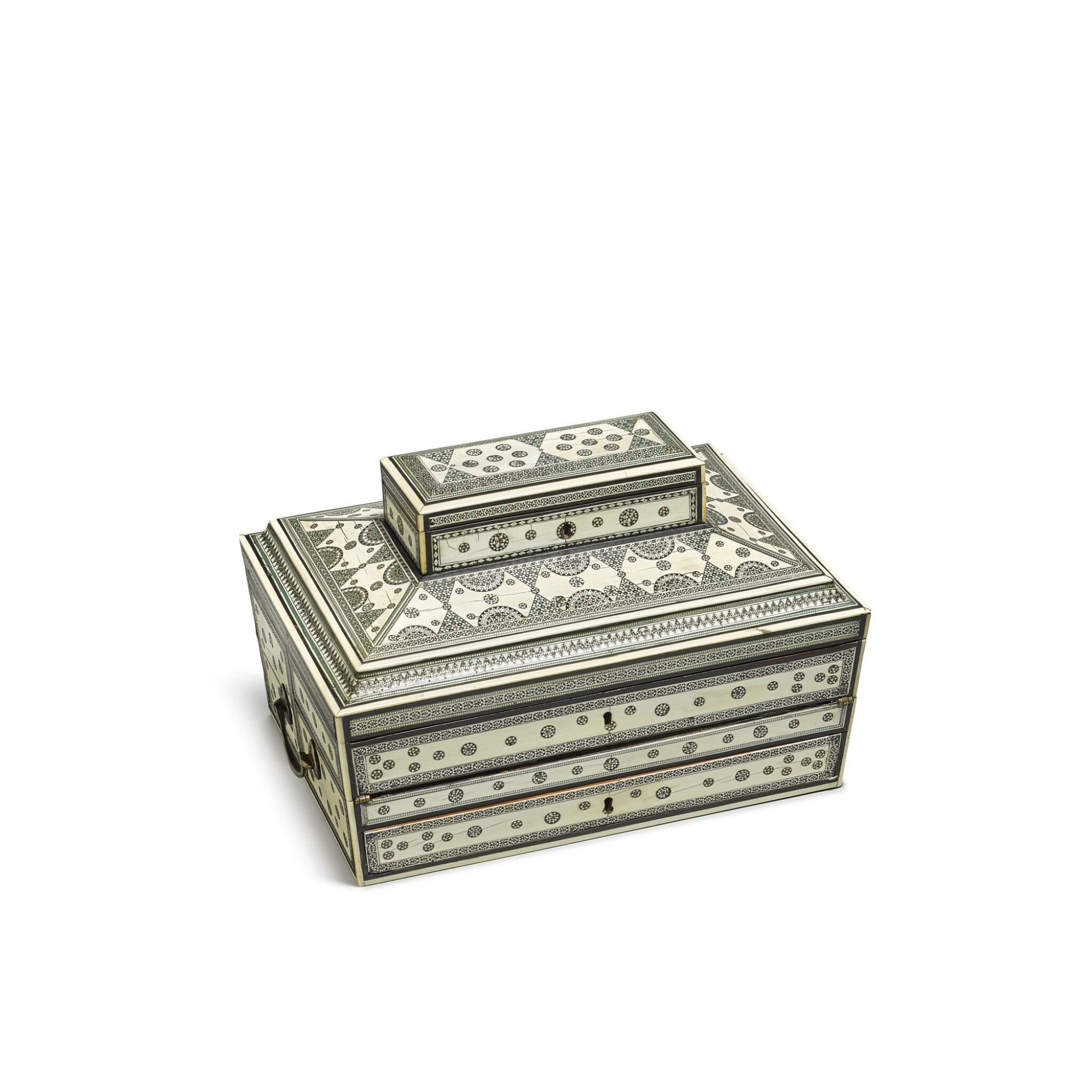 of rectangular form, the exterior decorated with sadeli and ivory, with brass lock and carrying handles, a hinged opening to upper section revealing a letter holder, hinged section opening to reveal various compartments with lids, this section detachable, showing below compartments devoted to writing, a drawer, lacking keys

This lot contains ivory. Sotheby’s recommends that buyers check with their own government regarding any importation requirements prior to placing a bid. For example, US regulations restrict the import of elephant ivory and prohibit the import of African elephant ivory, EU regulations restrict the import of elephant ivory from outside the EU and a registration system will be in force in the UK from 6 June 2022. Please note that Sotheby’s will not assist buyers with CITIES licence applications where a buyer elects to either collect or arrange their own shipping, nor will Sotheby’s assist with the international movement of ivory by air, either as freight or through hand carry. Please note that CITIES licences are required for the export of any restricted species from the UK, including EU countries. A buyer’s inability to export or import these lots cannot justify a delay in payment or sale cancellation.

Sadeli is a technique which consists of micromosaic made of wood, ivory and metal arranged in geometric patterns. This technique is usually associated with Western India, in particular with the Bombay Presidency (Bombay, Surat, Ahmedabad and Bilimora). The technique was known in other regions of India: in the catalogue of Bengal products sent to the Great Exhibition of 1851, some sadeli-wares are mentioned being made in Calcutta although "superior articles of the same description are made in Bombay" (Jaffer 2001, p.233).

Sandalwood was the preferred material used for such cases but due to its cost, often sadeli-decorated boxes "were constructed of a less expensive substrate with an inner lining and outer facing of sandalwood distinguishing the less expensive wood" (ibid, p.313); this is not the case for this refined work box, whose structure is entire made of sandalwood, emanating a delicate scent as soon as it is opened.