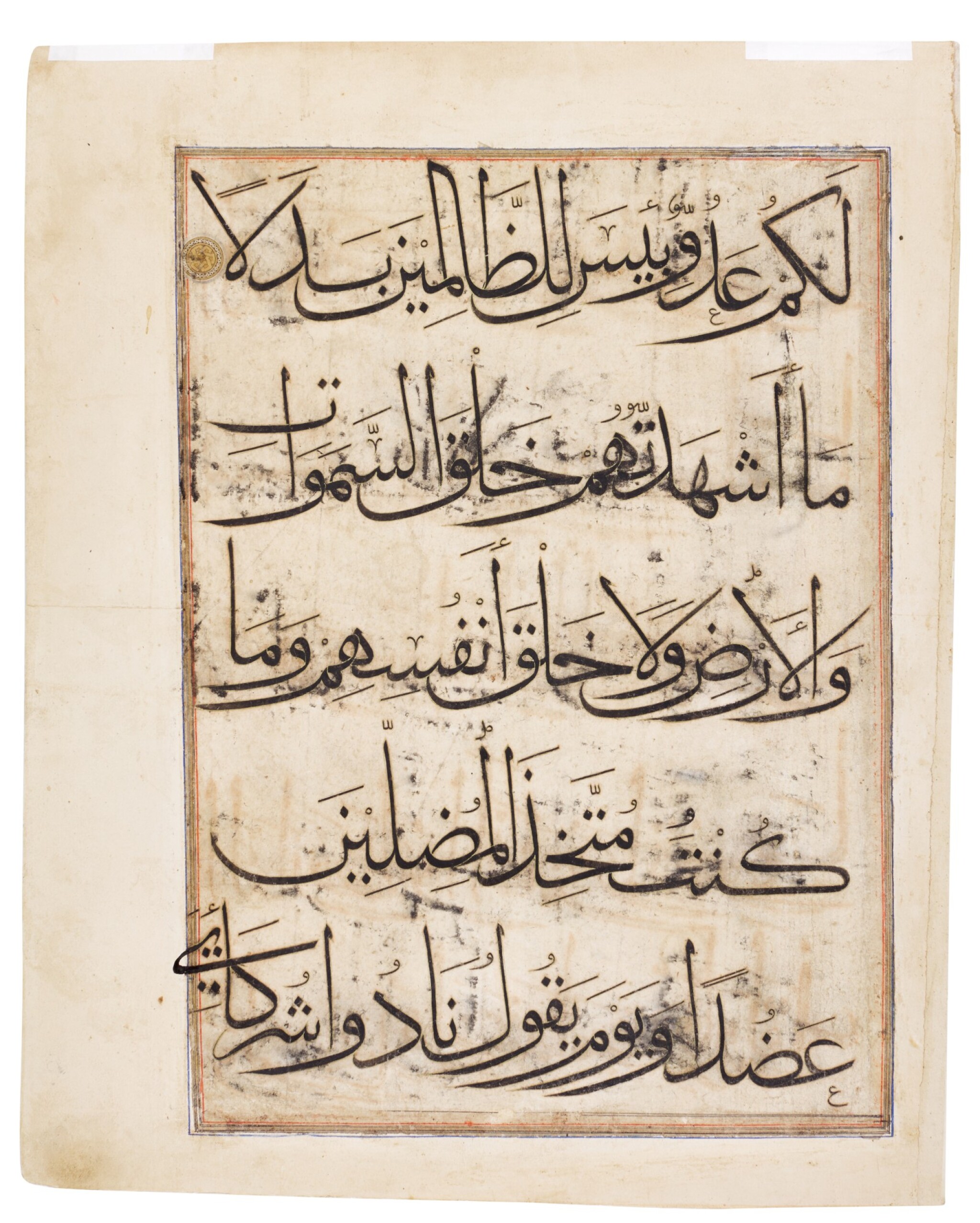 In fair overall condition, the text panels remounted. Some light creasing and discolouration, consistent with age. The ink remains strong and bold. Mounted with tape at upper edge, as viewed.

These two leaves originate from a manuscript of selected chapters from the Qur'an known as the 'Five Surahs' which begin with the phrase al-hamdulillah (chapters I, V, XVIII, XXXIV and XXXV). The colophon of the manuscript, now housed in a private collection, gives the name of the scribe as Abu Muhammad 'Abdul Qayyum Ibn Muhammad Ibn Karamshah-i Tabrizi. Abolala Soudavar has suggested on stylistic grounds that the compilation of Qur'anic verses from which this leaf originated was made for the Jalayrid ruler Shaykh Uways (Soudavar 1992, no.19, pp.50-51).

The extremely fine illumination is reminiscent of earlier Ilkhanid imperial Qur'ans, such as Uljaytu's Mosul Qur'an and the superb muhaqqaq script looks forward to the monumental Qur'an attributed to Baysunghur but more likely commissioned by his grandfather Timur (r.1370-1405). Furthermore, David James observes that the calligrapher achieves "...Faultless perfection...equalled only by Suhrawardi in the Qur'an produced in Baghdad in the early years of the 14th century" (James 1992, p.16).

Other leaves from this manuscript are in the Nasser D. Khalili Collection; The Art and History Trust Collection, now on loan to the Freer|Sackler Gallery, Washington; and the David Collection, Copenhagen. Two leaves were exhibited in Musée d'Art et d'Histoire, Geneva (see Geneva 1988, nos.23a and 23b, pp.100-104), whilst a further leaf was exhibited in the exhibition Writing the Word of God - Calligraphy and the Qur'an at the Museum of Fine Arts, Houston, 27 October - 3 February 2008 (published in Roxburgh et al 2007, p.46-47, fig.20).