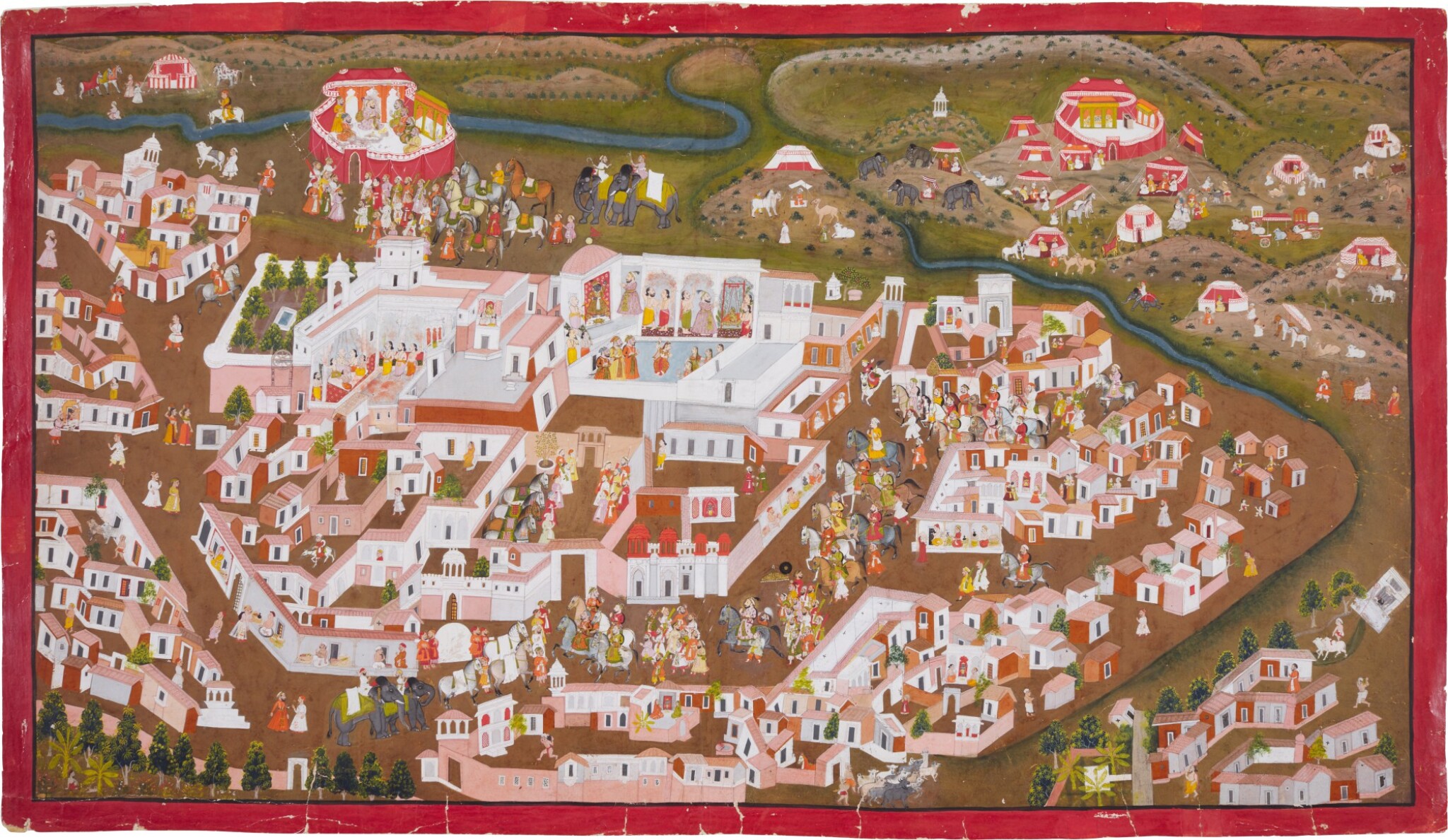 gouache heightened with gold on paper, narrow black border and red margin, five-line devanagari inscription on reverse "At Nathdwara, Maharana Sangram Singh at the temple of Shrinathji with Gosain ji... crossing the river... after darshan, he returns to the kingdom", bearing Mewari royal inventory numbers 2/24

Maharana Sangram Singh II of Mewar (r.1710-34) and his royal entourage visit the town of Nathdwara with its temple haveli dedicated to the god Srinathji. This enthralling, dynamic painting teems with minute figures, animals, architecture, and encampments depicted against a distant hilly landscape. Entering the town from the right, a nimbused Maharana Sangram Singh rides his grey stallion at a trot. A bearer of the dark royal symbol follows from behind; the large procession includes the Maharana’s noblemen and retainers.

The architecture of Nathdwara spreads across the central section of the composition - its walls and rooftops seen interlocking in an abstracted geometry. In a more private setting - within the walled confines of the haveli – the Maharana prays before the image of the infant Navanitpriyaji sitting in his swing, then accompanied by a goswami (head priest), he stands before Srinathji adorned in a gold jama against a red backdrop. A female dancer and musicians perform in the adjoining courtyard. To the upper left, the Maharana is depicted conferring with his noblemen within a red-tented encampment. Numerous attendants, horses, elephants and camels await. The multiple views of the Maharana serve to punctuate the individual scenes of worship and call attention to the importance of his royal visit to this sacred town.

Srinathji is a manifestation of Krishna as a child. The idol is treated as a living being, and under the supervision of temple priests is fed, bathed, dressed, and provided with rest on a strict daily schedule. Devotees worship at the Srinathji shrines several times per day.

With the aide of successive narration and an almost aerial viewpoint we are able to follow the Maharana's grand visit as well as isolate and enjoy many small vignettes of daily life in this bustling town. The view of a meandering tributary of Nathdwara's Banas River, with its encircling loop, helps focus the viewer's eye and provide visual guidance through the scene. Central to all we see Maharana Sangram Singh worshipping at the main Srinathji temple and later, at one of the smaller shrines situated in the town. Amidst the detailed clusters of whitewashed buildings, courtyards and homes, we glimpse other worshippers before shrines and townspeople going about their daily lives. Men and women converse, children play, an ascetic meditates. Cows and elephants graze nearby in the tree-dotted neighbouring hills.

This large-scale, complex painting commemorates a historic royal pilgrimage depicting the Maharana's visit to the temple, perhaps during the month of Chaitra when the gold clad image of Srinathji is worshipped (see Amit Ambalal, Krishna as Srinathji: Rajasthani Paintings from Nathdvara, Ahmedabad, 1987, p.122). Paintings such as this are among the most impressive in physical scale and compositional scope (along with depictions of the hunt) in all Rajput painting. See Andrew Topsfield, The City Palace Museum Udaipur: Paintings of Mewar Court Life, Ahmedabad, 1990, pp.21-37; and Court Painting at Udaipur: Art under the Patronage of the Maharanas of Mewar, (Artibus Asiae Supp.44), Zurich, 2001, pp.141-178.