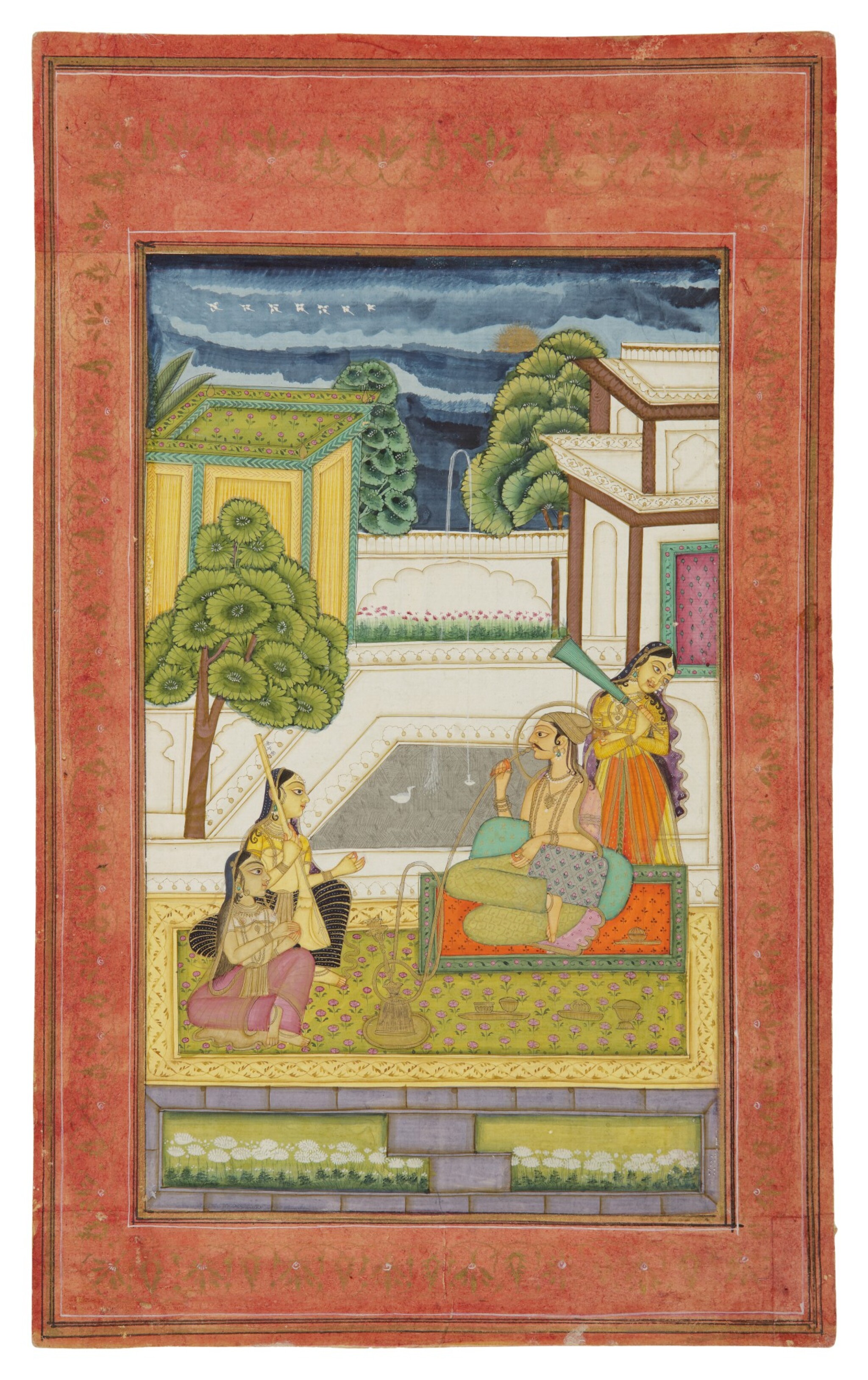 In good condition, very minor areas of creasing, surface specks of dirt and rubbing, areas of rubbing and wear to borders, as viewed

On a carpeted terrace, a seated nobleman leaning against a verdigris bolster puffs the winding stem of a golden huqqa. Behind him, a female attendant wearing a diaphanous skirt and a wavy purple head scarf trimmed in gold, holds a flywhisk as she glances away. Female musicians clap and play the tambura to the melody of Malkos Raga. Various edibles in golden bowls surround them. In the background a single stream of water issues from a fountain in the form of a tall slender spray. The moody, undulating afternoon sky painted in thick strokes of indigo blue, rises to a line of tiny white birds flying above.

As in other paintings from this unique series, the vividly patterned carpets and window curtains, and the richly expressive sky, offset the surrounding white marble architecture; highly stylised trees with verdant saucer-shaped leaves punctuate the composition. The figures are noticeable too for their prominent, sweeping almond-shaped eyes. The illustration, like others from the series, is encased in a salmon-pink colored border decorated with panels of delicate interlacing gold leaves. In describing a painting from this series in the Philadelphia Museum of Art, Stella Kramrisch observes that “The Deccani schools, even in their provincial offshoots, are unrivaled in the subtle nuances and the emotional depth of their color compositions” (S. Kramrisch, Painted Delight, Indian Paintings from Philadelphia Collections, Philadelphia, 1986, p.164, no.37).

For other paintings from this series see Kramrisch, op.cit., p.42, no.37; the Edwin Binney 3rd Collection at the San Diego Museum of Art, accession nos.1990.541 and 1990.542, and Sotheby’s New York, 21 September 1995, lot 113. See also photographs of two other paintings from this series, one titled Sri and the other Gunkali, in the digital library of the Klaus Ebeling Ragamala Painting Research Collection, 1952-73, Collection No.8400, at Cornell University, Ithaca, New York. This collection includes approximately four thousand slides of Ragamala paintings taken by Ebeling between 1967 and 1972. The collection was later donated to the University by the musicologist Joep Bor.

The seal stamp on the verso refers to Miraj Junior State, now in present day Maharashtra, which was one of two Maratha princely states during the British Raj period.