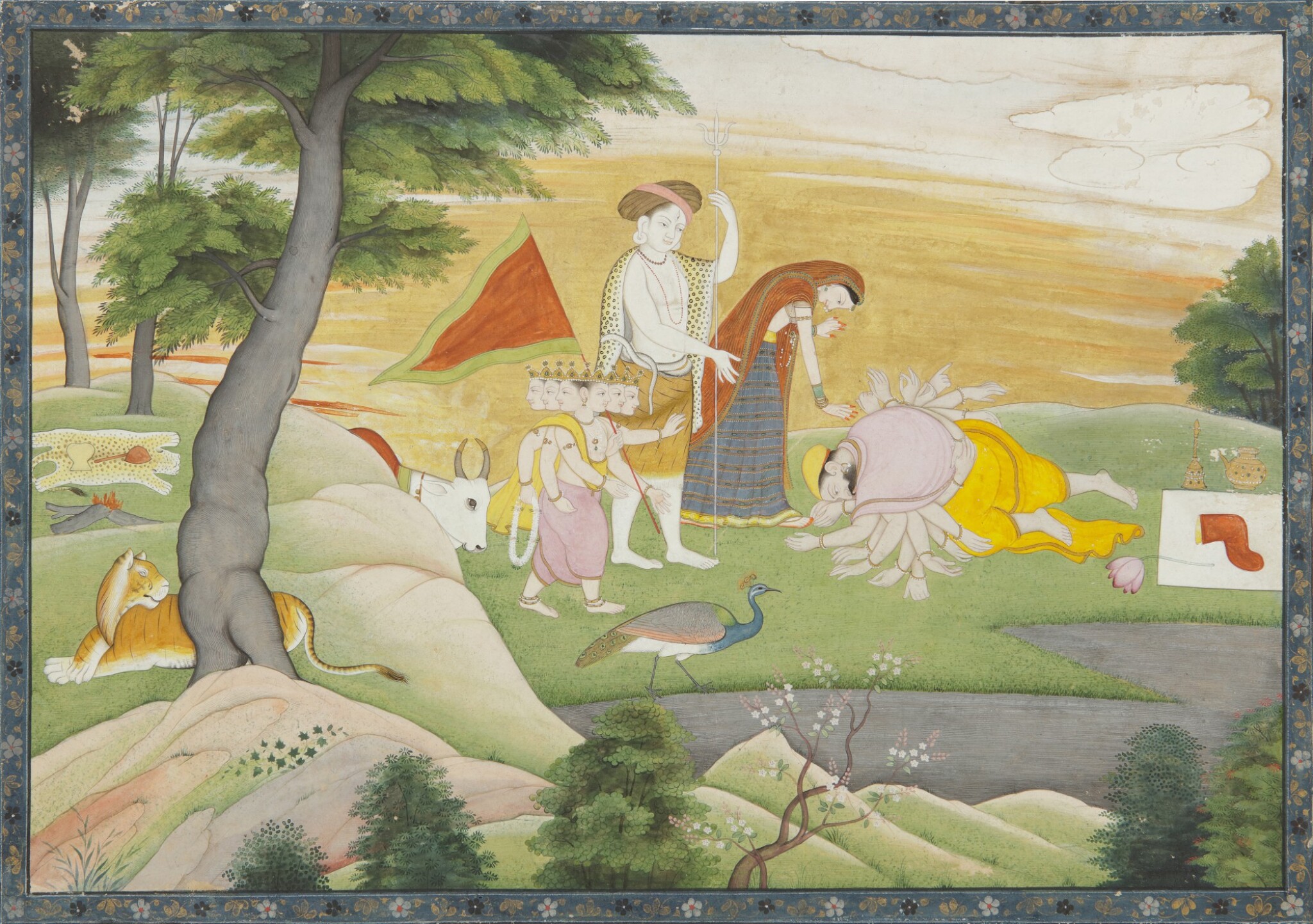 The thousand-armed king Banasura prostrates before Shiva and Parvati, who have descended from their abode on Mount Kailash to grant him their blessing. Parvati reaches down to bestow a boon upon him. Their son Karttikeya holds a pennant and mala (flower garland) as Nandi the Bull walks devotedly behind. Parvati's lion mount, recumbent by a tree, contemplates the scene, whilst Karttikeya’s peacock mount struts elegantly nearby. The palette of the composition is dominated by soft mauves, white, greens, and gold. The sky is washed with gold and streaked with vermilion as clouds pass revealing a pale blue sky above.

This masterpiece of Pahari painting bears a lyrical and refined depiction of a rarely seen story from the Bhagavata Purana – that of Usha and Aniruddha. In our present painting, Banasura, with red prayer bag and other devotional items nearby, kneels respectfully at the feet of Shiva and Parvati. As the legend relates, Banasura is conferred a flagstaff – held here by Karttikeya – which he installs at the gates to his citadel. As long as the pennant flies high the king knows that his might is unchallenged. One day, when it lies broken, he faces his challenger, none other than Krishna who has come to rescue his grandson Aniruddha from Banasura’s clutches and have the king’s daughter Usha marry him.

Shiva and his family are exquisitely rendered, their faces and forms and delicacy of expression in perfect harmony, gracefully occupying their surrounds. It is a wonder to closely examine the meticulous modelling of Karttikeya’s six heads. Shiva’s grandeur, and his subtly rhythmic stance, mimic that of the undulating landscape- his gentle yet confidant gaze infusing the scene with an unmistakable sense of tranquility. Parvati’s natural, fluid pose accentuates the setting’s subtle sense of movement, while our glimpse of Nandi’s superbly rendered head and delightful velvety softness accentuate the illustration’s mood and beauty.

The scene is set within a landscape of gently rolling hills and trees, with a silvery lake in the foreground. In the background on the left is a leopard skin with some household implements, in front of the glowing embers of a campfire. The balance and confidence of the compositional devices, for example, the curving tree trunk on the left bisecting the recumbent lion, coupled with the delicacy of the golden-hued sky, the rainbow tipped rocks, and lush foliage, display the consummate skill of the family workshop of Manaku and Nainsukh, master artists of Guler. Indeed, the painting is imbued with both intimacy and power, a particular skill of this lineage of artists. Another version of the same episode, similarly attributed, was in both the Nasli Heeramaneck and Claus Virch collections (See Alice Heeramaneck, Masterpieces of Indian Painting, Verona, 1984, pl.121, p.131 and Sotheby’s New York, 16 March, 2016, lot 829).

The “First Generation after Manaku and Nainsukh” refers collectively to the six sons of the Pahari masters Manaku and Nainsukh: Fattu, Khushala, Kama, Gaudhu, Nikka, and Ranjha and their extended family workshops. These six are the grandsons of the Guler artist Pandit Seu (c.1680-1740) who is considered the progenitor of their family dynasty, which originated at Guler and then expanded to the royal courts of Jasrota, Basohli and Jammu and various other Pahari royal households.

For another painting almost certainly from the same Usha-Aniruddha series as the present painting, from the Eva and Konrad Seitz Collection in the Museum Rietberg, Zurich, see John Guy and Jorrit Britschgi, Wonder of the Age: Master Painters Of India, 1100-1900, The Metropolitan Museum of Art, 2011, Banasura’s penance; his vision of Shiva and Parvati: folio from an Usha-Aniruddha Series, pp.168-9, no.88. Both the present and Rietberg paintings are almost an identical size and their highly similar pictorial characteristics - the treatment of the sky in a broad wash of gold colour; the execution of the trees, and the placement of the couple’s tiger skin on Mount Kailash at the upper left with a lit campfire nearby - make it very likely that they are the work of the same hand. The Rietberg painting has been attributed to the artist Nikka, the third son of Nainsukh, who came from Guler but who settled in Chamba, working at the court of Raja Raj Singh of Chamba (1755-94). The only clear difference between the works is the addition of the flowers added to the blue border of the present painting which are absent in the Rietberg composition.