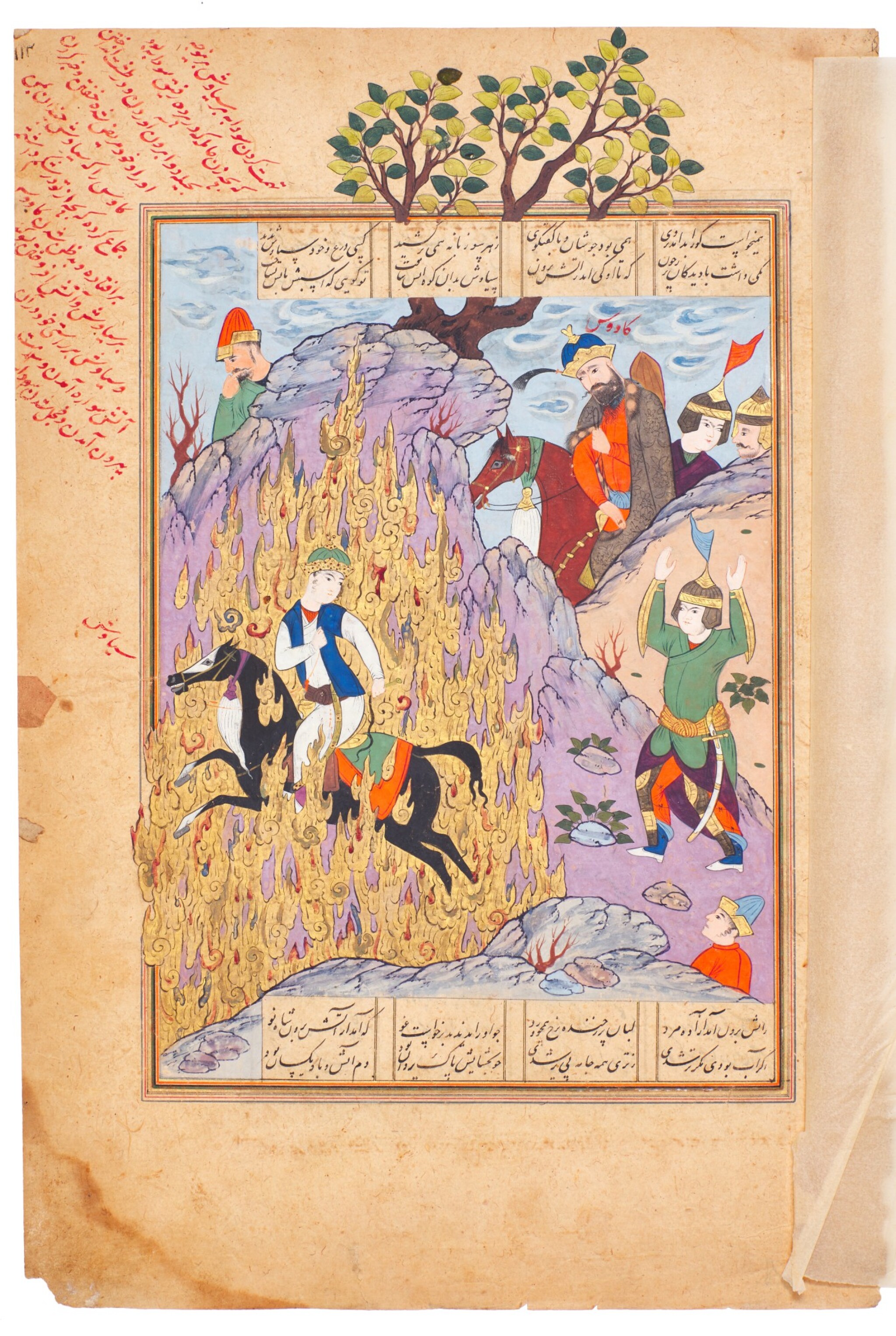 In good condition overall. Minor, scattered losses to the pigment, not affecting the clarity of the scene. Minor marginal water staining, as shown in the catalogue illustration and several small repairs to the margins. Small areas of cracking to the rules. The reverse with some discolouration from the pigments of the illustration, as viewed.

Both in style and composition, the following six folios from a magnificent dispersed Shahnameh of Firdausi closely relate to several manuscripts that have been attributed to the Qazwin school and, more specifically, to the circle of master artist Siyavush Beg.

The paintings share a clear affinity to a late sixteenth century Qazwin Shahnameh manuscript in the Al-Sabah Collection, Kuwait (inv.no. LNS 223 MS, see Adamova and Bayani, 2015, pp.459-483, no.32), another in the British Library, dated 1604 AD (inv.no. IO Islamic 966); and the Garshaspnameh of Asadi, also in the British Library, which expands and complements Firdausi’s original text (inv.no. Or. 12985, dated 1573).

Regarding the style of Siyavush-like paintings in the British Library (inv.no. IO Islamic 966), B. W. Robinson credits the unnamed artist as being a “young Isfahani.” The scholar Barbara Schmitz has since modified Robinson’s “young Isfahani” attribution to an “old Qazvini” artist working alone in a style that had by the early 1600s gone out of fashion (Schmitz 1997, p. 130). Whether or not it was Siyavush, this same individual executed most of the miniatures in the British Library copy dated 1604. Robinson has also attributed three miniatures of the above-mentioned Garshaspnameh to this same “young Isfahani” which Norah M. Titley has contested to be the work of Siyavush Beg (Titley 1983, p. 107).

Adamova and Bayani have similarly suggested that the Kuwait manuscript was produced in the Qazwin style and can be attributed to the courtly painter Siyavush Beg, on account of its similarities to the dispersed Shahnameh of Shah Isma’il II. One such characteristic associated with the artist is the profile faces of the onlookers at the lower margin of the image (Welch 1976, p.26), a feature displayed in all but one of these illustrations. The illustrations also have almost identical compositions and decorative ornamentation to the Kuwait manuscript such as the array of delicately drawn animals and birds adorning the interior walls, and thick outlining of the rock formations.

Though not much can be said with absolute certainty about the production of this Shahnameh manuscript group, they are all apparently from a common workshop. This is based on stylistic grounds as the illustrations appear to have been produced by Siyavush Beg or a painter working closely alongside him during the last quarter of the sixteenth century. Their sumptuousness vouches for an expensive production affordable to a prince or an aristocrat who could employ elite artists and cover the expenses of their studio. Across the second half of the sixteenth century, there was an upsurge of sub-royal patrons who were commissioning richly illustrated manuscripts in parallel or in competition with princely ateliers.

We are grateful to Jaimee K. Comstock-Skipp for her assistance in the preparation of this entry. For further information see Jaimee Comstock-Skipp and Asim Saeed, ‘From Georgian Slave to Safavid Master: Some Possible Additions to the Corpus of Siyavush Beg Gurji’, Asian and African Studies Blog, British Library, 9 May 2022.