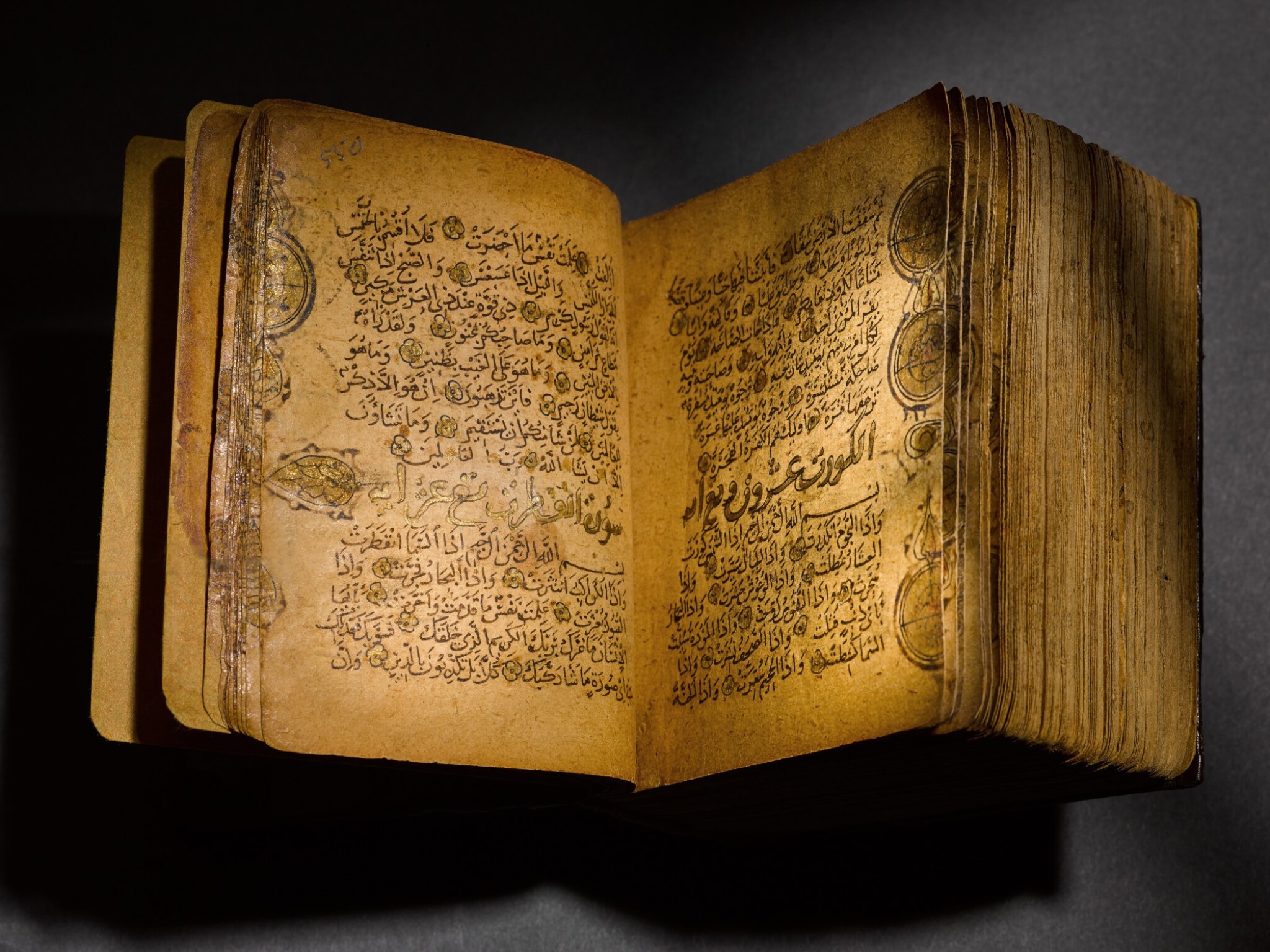 Arabic manuscript on paper, 284 leaves, plus 2 fly-leaves, 15 lines to the page written in naskh in black ink, verses separated by gold rosettes, surah headings in gold outlined in black, f.1a with illuminated frontispiece, f.1b and f.2a with double-page illumination framing text, illuminated verse markers in the margins, f.283b and f.284a with text framed in gold with colophon, in gilt-stamped brown leather binding, with leather case

In good condition overall. The text block has been trimmed causing minor cropping to the marginal medallions. The folios are clean overall with some minor discolouration and small smudges, consistent with age, and very small wormholes, mainly within the margins. The left side of the double page opening frontispiece remains but the right hand leaf is lacking. There are two replacement leaves at the beginning of surah al-Imran and the manuscript is partially misbound. There are minor marginal repairs to the first and last couple of leaves. The binding is stable with minor surface wear, as viewed.

This important survival documents the transition and growing popularity of rounded scripts during the twelfth century. Between the late eleventh to early thirteenth centuries, cursive scripts came to dominate the calligraphic scene which was canonised by the tenth-century scribe Ibn Muqla. The earliest surviving Qur’an in this style was penned by Ibn al-Bawwab, dated 391 AH/1000-1 AD, now in the Chester Beatty library, Dubin (inv. no.Is 1431).

Aside from the Ibn al-Bawwab Qur’an, only a handful of dated eleventh century Qur’ans are known, including one in the British Library attributed to Iraq (inv. no.Add MS 7214) and dated twelfth century examples are equally as rare. This manuscript bears a partial date of 54 AH, followed by kha’, probably an abbreviation of 500, indicating that it was produced in the mid-twelfth century.

Blair notes that copyists at the time were grappling with transforming their regular rounded scripts into calligraphic scripts worthy of sacred texts (Blair 2006, p.202). Faced with the added challenge of the unusually small format of the page, our scribe has adopted a looser style of naskh that is comparable to the British library manuscript. This style is also found on another dated twelfth-century Qur’an in the Khalili Collection (inv. no.QUR572, James 1992, pp.40-3, no.6).

The illumination in tones of sepia, gold and blue are characteristic of the earliest cursive Qur’ans. The opening illumination formed of interlocking circles also adorns the Ibn al-Bawwab Qur’an and an eleventh century Qur’an in the Khalili collection (inv. no.QUR 284), This feature appears to have been derived from the frontispieces of Kufic Qur’ans such as a frontispiece in the Freer Gallery of Art (acc. no.F1934.26). Similarly, the marginal drop motif khamsa markers closely resemble those of the British Library manuscript, and it has been suggested that they are adapted forms of the gold ha’ markers of Kufic Qur’ans (see lot 11 in the present sale).