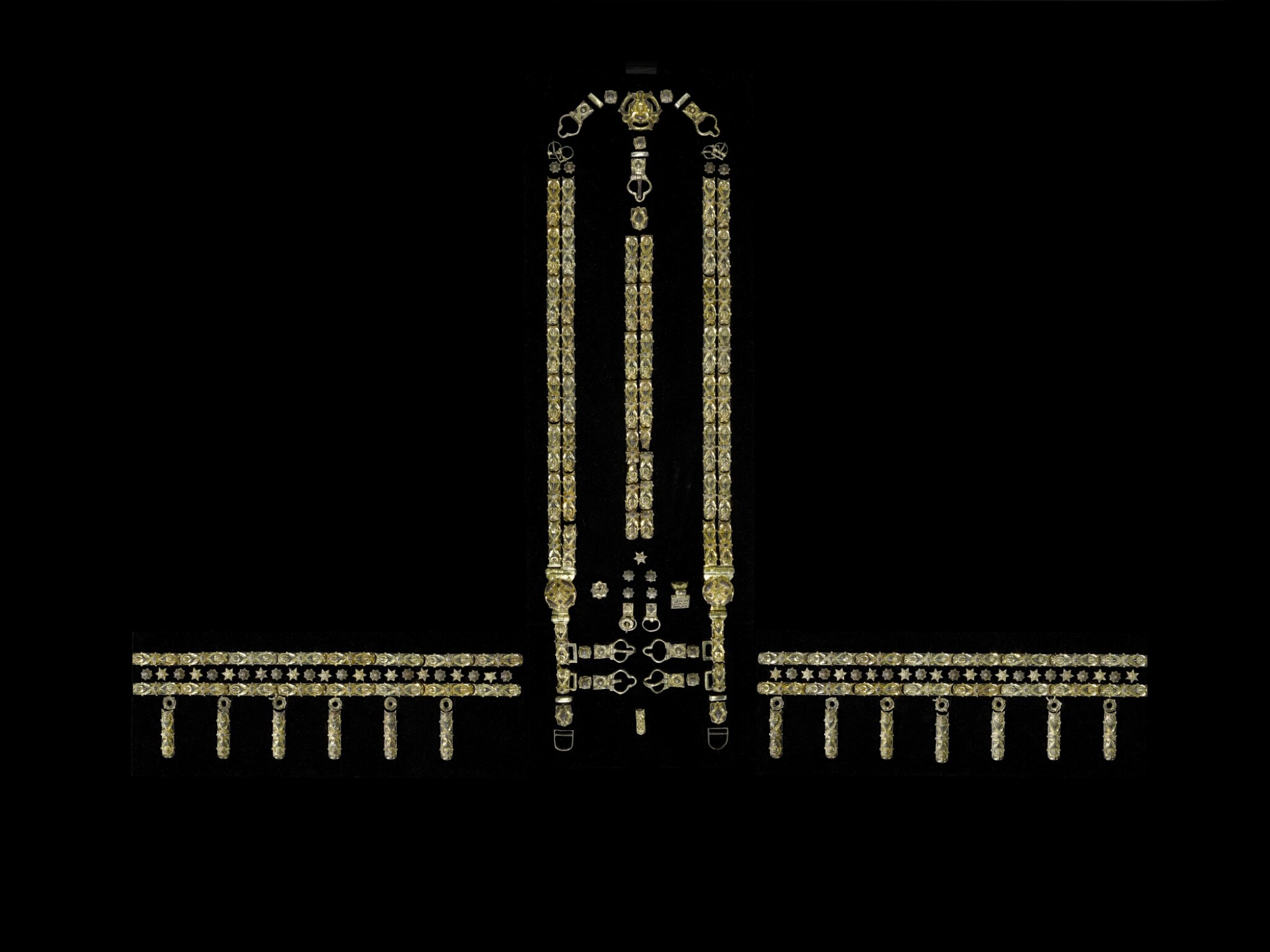 consisting of a set of fittings of silver with gilt and niello decoration, chiselled and chased with a series of interlocking rectangular elements of bevelled and knop design, some attached to hinged bosses, square and rosette elements with inscriptions, rosette and star studs, openwork boss with tri-lobed split-palmette design, fitted inside three cloth-lined cases

In good overall condition, some losses, corrosion, fused hinges and patination consistent with age, some flat back plate elements missing, as viewed

on the amulet case:

on the round stud:

The decoration on these pieces is characteristic of ninth/tenth-century Nishapur where trappings are recorded to have been used by Samanid warriors; a similar piece can be found in the Nasser D. Khalili Collection (see Alexander 1992, p.28, no.2; M. Spink, 'Belt and harness fittings from Iran and Central Asia' in The Art of Adornment, The Nasser D. Khalili Collection of Islamic Art, Vol.XVII, ed. M. Spink and J. Ogden, Nour Foundation, London, 2013, pp.320-41.)

These fittings are in the bevelled style, with niello and gilt decoration. This contrasts with the belt fittings decorated in relief with floral scrolls and recumbent deer originating from Central and Inner Asia and China during the Qara Khitay and Liao periods, tenth-thirteenth century (Bunker, White and So 1999, pp.258-261, nos.108, 109; Spink and Ogden 2013, pp.330-296, nos 293-6).

The archaeological evidence providing supporting comparables to these harness fittings comes from the Nihavand hoard and the Chimkent hoard. Both hoards are discussed in Spink and Ogden 2013, pp.167-8, 328.

The objects comprising the group known by this name in the British Museum were reportedly found at Nihavand, near Hamadan, Iran, and are datable to the eleventh or twelfthth century. Other items in the Museum of Islamic Art, Cairo (unpublished) and in the L.A. Mayer Museum for Islamic Art, Jerusalem, (Hasson 1987, pp.44-45, no.66) are considered to be from the same hoard. The British Museum portion of the hoard was published in Gray 1938-39, and is discussed in Allan 1976, pp.572-6. Components of the hoard fall into two groups. One part with a bevelled design, as here, are illustrated in Gray 1838-39, pl.XXXII, as group ‘a’, while another part, with inlaid niello, described by Ettinghausen as ‘linear’, as group ‘b’ (Ettinghausen 1961, p.131). Ettinghausen considered that the bevelled group may come from Central Asia (Ettinghausen 1961, pp.129-31 and plate LXXVII), although the find spot means Iran cannot be excluded.

Belt fittings found at Nishapur, although more rounded, are related to the elements of bevelled style in the Nihavand hoard (Allan 1982, pp.29, 62-65, nos.17-21, 28). Allan notes the rarity of Islamic decoration in the form of inscriptions, found on the present harness on a hinged plaque, and on an eight-pointed star plaque (Allan 1982, p.29).

Found in 1900 at the ruin of Sayram, near Chimkent in the valley of the River Sayram-su in the Semirech’ye (Central Asia), the hoard comprises many fragments of jewellery, probably scrap, and coins dating between 949 and 1040, but could have been buried much later. The hoard was published by Spitsyn in 1906, and the illustrations to Spitsyn’s article are re-published in Allan 1986. Specific points of comparison between the present harness fittings and the Chimkent hoard are the form of strap ends (Spitsyn/Allan nos.14, 16, 19, 20) and the design of roundels (Spitsyn/Allan nos.9 and 13). The decoration is however closer to the linear niello decoration of some of the Nihavand hoard (Allan 1982, p.29). Some of these and other belt and harness fittings are illustrated and described in Korzukhina 1954, (pl.LVI) and Darkevich 1976, pls.40, 41.

Separately, there is a hinged panel with an inscription, from Myshelovka (near Kiev, Ukraine), in Darkevich 1976, pl.41, and a hinged panel in the David Collection (66a-d-1998), related to a hinged panel of the present harness set.