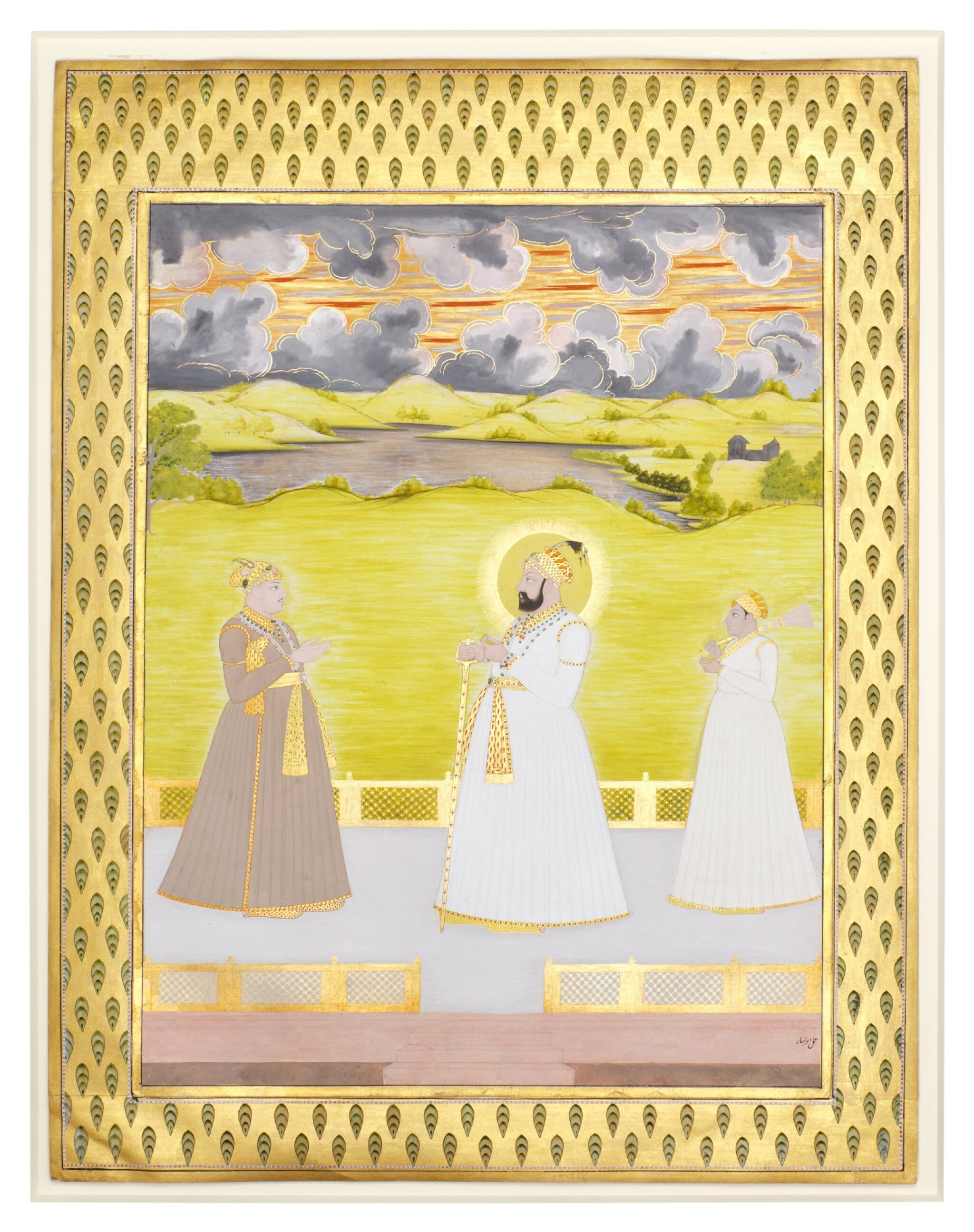 In good condition, very minor rubbing to the gold inner border and to small areas of the gold pigment, as viewed

Under the Mughal Emperor Muhammad Shah a new style of painting flourished. This Delhi atelier of artists was lead by two khanazad (palace born) artists, Hunhar II and Kalyan Das (better known as Chitarman). Hunhar's given name was Puran Nath but like a number of other artists in the Delhi atelier he chose to adopt the name of an earlier seventeenth century Mughal master. The artists were commissioned to depict a wide variety of subject matter that included baramasa and ragamala paintings as well as portraiture, and in particular the portrayal of their ruler alongside his political allies.

Initially these artists worked solely under the patronage of Muhammad Shah, however as political tensions increased in Delhi and with the death of Muhammad Shah in 1748 a number of artists relocated to the provinces of Awadh and Bengal. It is believed that Hunhar accompanied the Mughal prince ‘Ali Gauhar (later Shah ‘Alam II) to Murshidabad in 1758-59 (see Roy 2012, p.22) and then moved to Awadh around 1765, where Nawab Shuja al-Dawla had established his new capital in Faizabad (McInerney 2002, p.29).

Compositionally this painting follows the typical mid-eighteenth-century Mughal portraiture style of Delhi. Here Mir Ja'far is depicted in standing profile dressed in a white floor-length jama, his status defined by his richly embroidered patka, jewels and haloed turban. Similar Hunhar portraits in the Delhi portraiture style can be found in the Johnson album in the British Library (see Archer & Falk 1981, nos.269-274). The distinctive formal foliate gold border seen on the present lot relates closely to the borders of a Johnson album ragamala series painted in Murshidabad circa 1760 (see Falk and Archer 1981, p.195, no.370).

Interestingly the other portraits that Hunhar painted of Mir Ja'far see the artist using a larger scale format and more detailed composition associated with the Murshidabad school and is an indication of the change in his style following his move to the provinces, see for example the signed painting dated 1759 in the Victoria & Albert Museum of Mir Ja'far out riding with his son Miran (Losty 2017, fig.34), Mir Ja'far watching dancing in his garden, circa 1763, from the Swinton Collection (ibid. fig.33) and Mir Ja'far receiving kneeling petitioners circa 1760 (see Binney 1973, no.109). For a further discussion of Hunhar's career, see McInerney 2002, p.29, Skelton 1956, pp.16-17, Roy 2012, p.22, Falk and Archer 1981, pp.136, 193, and Losty and Roy 2012, pp.151.

The seal on the reverse belongs to Jagat Seth, a wealthy banking family who were the most prominent moneylenders to the East India Company. The head of the family was Madhab Jagat Seth who aligned himself with Robert Clive and along with Mir Ja'far were responsible for the defeat of Siraj ud-Daulah, the last independent Nawab of Bengal.