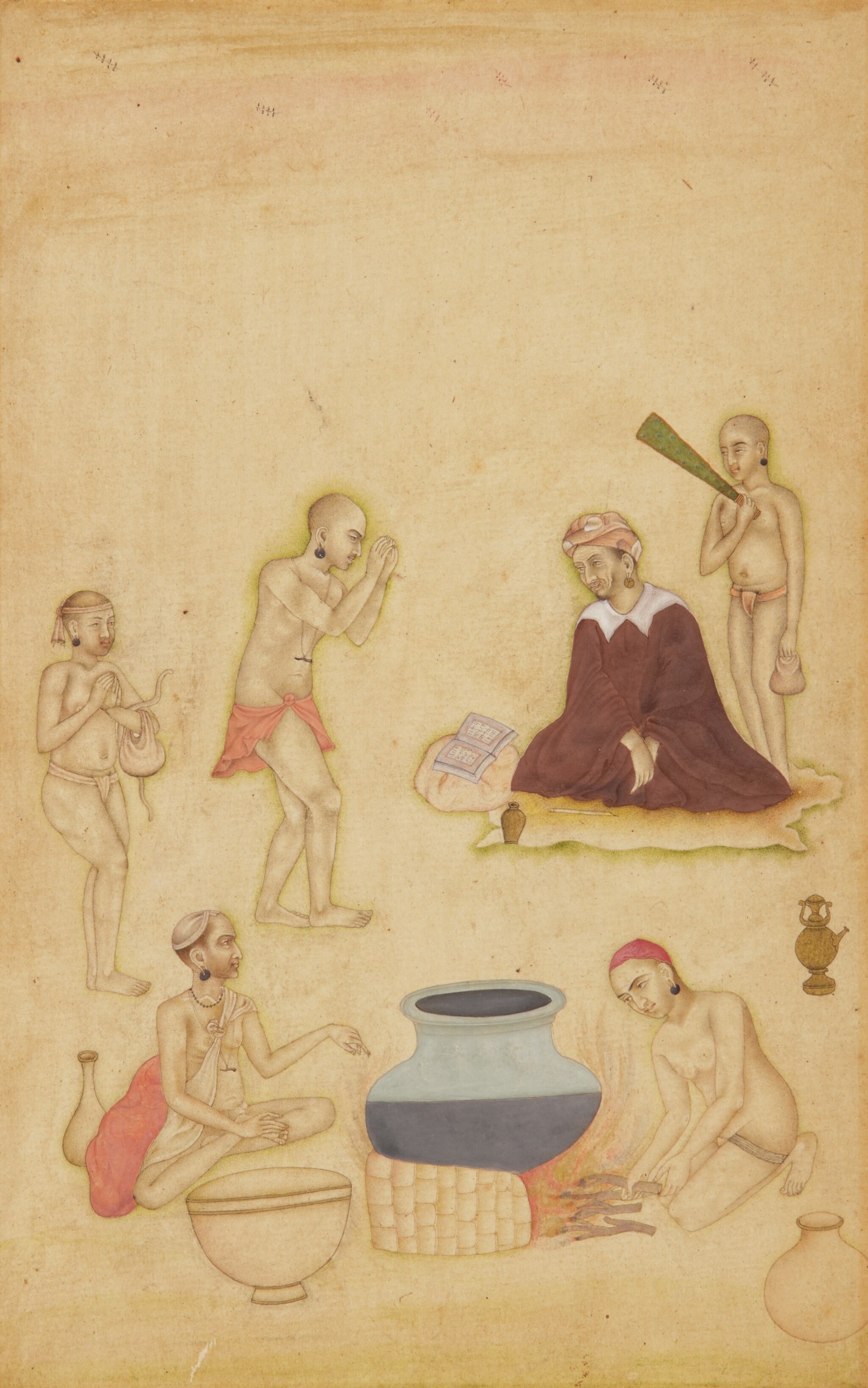 gouache and wash on paper with gold accents, verso inscribed in devanagari script: Hasamdi ro kam (the work of Hasamdi)

In a still and stark setting, a Kanphata elder sits on an animal skin carpet, his glance directed down towards an open book, a pen and a small gold ink vessel lying before him. He is dressed in a voluminous burgundy cloak with a white collar, a pink cloth turban on his head. Another Kanphata, his head shaven, stands before him showing deep respect with hands raised, while a younger disciple stands behind him, palms pressed, a pouch holding a snake hanging from his left arm. An attending acolyte stands behind the master holding a morchal (ceremonial fan). Below, two seated Kanphatas tend to a large pot on an open campfire. The scene is depicted on a plain buff background with a minute line of birds flying in the golden light wash of the sky above. The Kanphata (ear split) yogis, two of whom are wearing thread necklaces on which a single horn is suspended, are adorned with their signature earrings and unclothed but for bands of cloth tied loosely around their bodies. The sparing use of gold as a luminous highlight gently dazzles for visual and spiritual effect.

This remarkably refined tinted drawing is executed in nim qalam (partly-painted) style. The faces in the composition, particularly of the two principal subjects, are depicted in fine portrait-like detail, with a remarkable sense of realism, an aspect of Indian painting derived from Mughal naturalism. The superb execution of this drawing, in the Mughal manner, suggests that this is likely by a Mughal-trained artist. The pale pink folio border surrounding the drawing is quintessentially Bikaneri and this origin for the work is further confirmed by the inscription on the verso with the name of the artist Hasamdi – Hasan al-Din (son of Shah ‘Ali) – who was active in Bikaner in the 1680s (our thanks to Professor John Seyller for this insight.)

For a drawing of a Kanphata yogi attributed to Basawan, see Stuart Cary Welch and Kimberly Masteller, From Mind, Heart, And Hand, New Haven, 2004, pp.88-89, no.21. A drawing ascribed to Mas’ud from the Johnson Album in the British Library, accession no.J.22,15, depicts a similar encampment of Nath Kanphata ascetics in a landscape setting, also executed in nim qalam. For additional references on the subject of Kanphata yogis and other depictions, see Rosemary Crill, 'Seven Yogis, a Dog and a Banyan Tree', in Mahesh Sharma and Padma Kaimal (eds.), Themes, Histories, Interpretations: Indian Painting: Essays in Honour of B.N. Goswamy, Ahmedabad, 2013, pp.160-7, no.12.3. For another example from the Johnson Album in the British Library see accession no.J.22,11.

For other Bikaner artists and their genealogies, specifically those from the Umarani branch of Usta artists see Naval Krishna, 'The Umarani Usta Master-Painters of Bikaner and their Genealogy' in Andrew Topsfield (ed.), Court Painting in Rajasthan, Marg, Mumbai, 2000, pp.57-64.