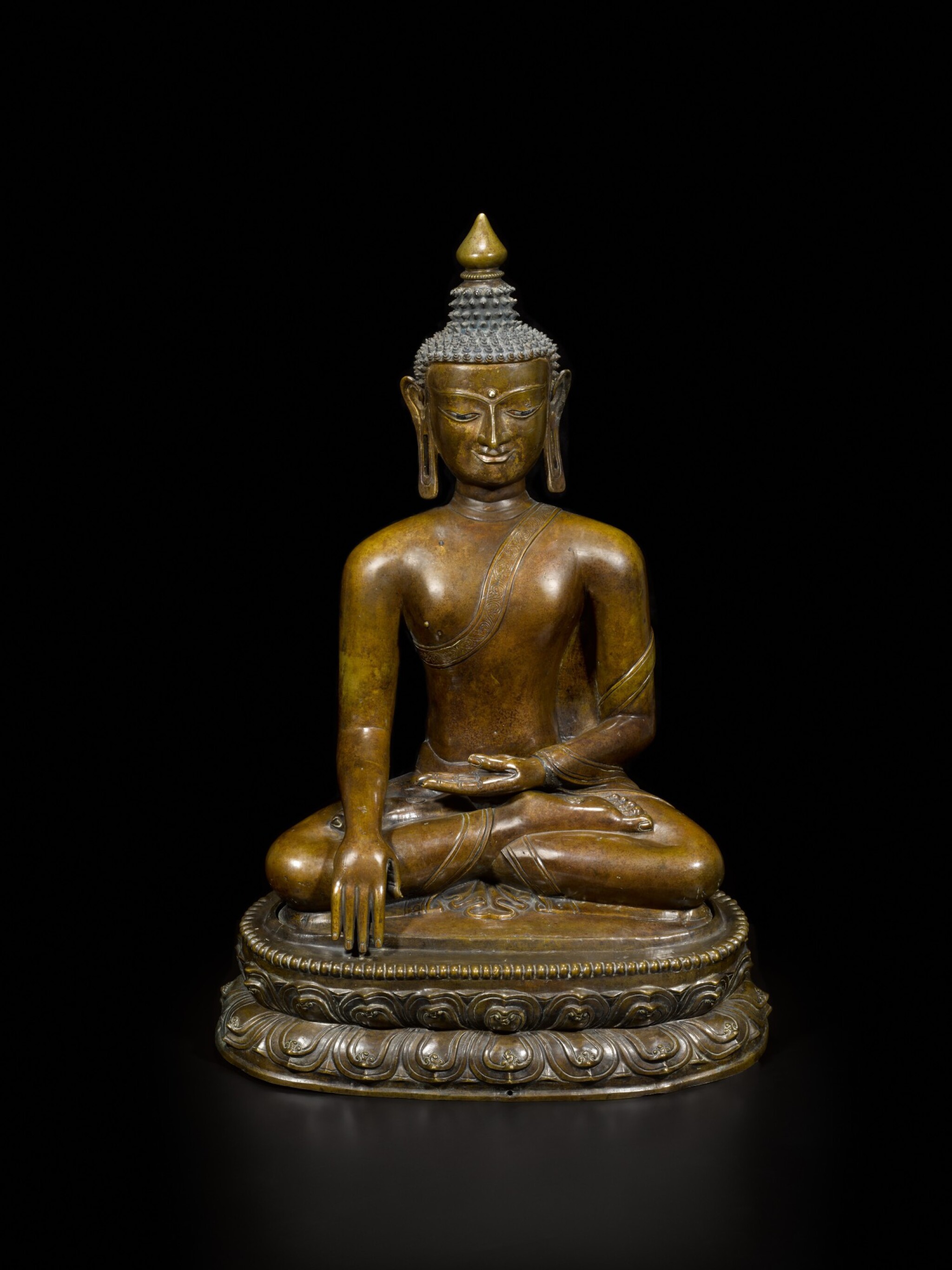 Property from a European private collection

the hands in bhumisparsha mudra, seated in vajaryankasana

There is an old repair to the back of the neck with some repatination around the neck, most likely to secure a crack in the cast. The figure itself and the base are cast separately and possibly associated. There is some surface wear and occasional pitting as visible on the photos, some wear to the gilding on his face and a small dent to the tip of his nose. The figure remains in very good presentation state, it is particularly large and majestic.

This imposing statue of Buddha is representative of an early group of central Tibetan bronzes influenced by eastern Indian Pala period (8th-12th c) traditions. Silver highlights the whites of the eyes, and copper is inlaid in the lower lip, the fingernails and toenails, the chakra mark on the left palm and the soles of both feet. Metal inlay was commonly employed in the embellishment of eleventh and twelfth century metalwork from eastern Indian workshops, a technique that was enthusiastically espoused by Tibetan craftsmen from the eleventh century. The intense expression of the face with bright, engaging eyes and slightly smiling lips is reminiscent of the silver and copper inlaid bronzes from eastern India, such as a standing Buddha found at Kurkihar, Bihar, see Ray, Khandalavala, Gorakshkar, Eastern Indian Bronzes, pls. 255 a, b. In common with the vast majority of larger scale bronzes from eastern India in the medieval period, the lotus pedestal is cast separately from the figure. These similarities with Indian traditions suggest the figure was made in Tibet during or shortly after the period when contact with Indian artists was the principal source of inspiration for Tibetan sculpture and painting. Tibetan bronzes after the fourteenth century are increasingly modelled and gilded in the Nepalese manner, with less emphasis on inlaid metal embellishment.

This iconographic form of Shakyamuni Buddha, in which the historical Buddha is seated in the meditation posture (vajraparyankasana) with right hand in the earth-touching gesture (bhumisparsha mudra), recalls the episode in which he triumphs over Mara (maravijaya) just prior to his enlightenment. Having vowed to remain in meditation until he penetrated the mysteries of existence, Shakyamuni was visited by Mara, a demon associated with the veils and distractions of mundane existence. The Buddha remained unmoved by the diversions with which Mara sought to deflect him from his goal. According to traditional accounts Mara’s final assault was an attempt to undermine the bodhisattva’s sense of worthiness by questioning his entitlement to seek the lofty goal of spiritual enlightenment and the consequent freedom from rebirth. Aided by spirits who reminded him of the countless compassionate efforts he had made on behalf of sentient beings throughout his numerous animal and human incarnations, Shakyamuni recognised that it was his destiny to be poised on the threshold of enlightenment and moved his right hand from the meditation position in his lap and touched the ground, stating, ‘the earth is my witness’. This act of unwavering resolve caused Mara and his army of demons and temptresses to disperse, leaving Shakyamuni to experience his great enlightenment. The episode is said to have taken place in Bodh Gaya, Bihar at the adamantine site (vajrasana) that is believed to have been especially empowered to expedite The Buddha’s enlightenment.