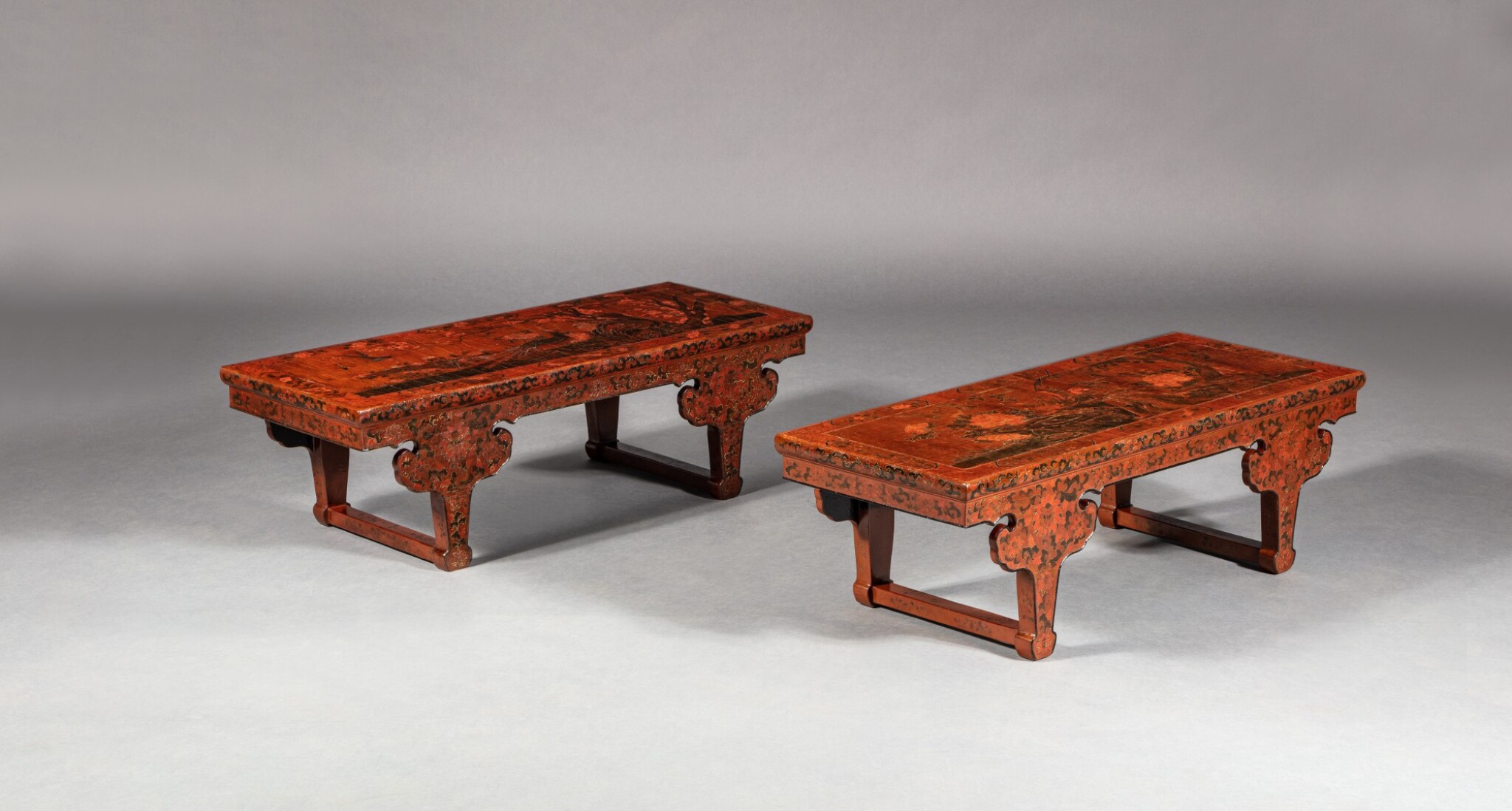 each with a mitered rectangular top supported on ruyi-shaped recessed legs joint at the base by a transverse stretcher, applied overall with a rich crimson-red lacquer finely incised, painted and gilt on the top with flowers and birds, and further flowers on the side and legs

The two tables are generally in good condition and have been extremely well maintained along the years. There are traces of gilding in the incisions on the side and the natural age crackling on the top have been well stabilized. Overall the two tables are in very good presentation state.

The techniques of qiangjin ('etched gold'), where the lines of a design are incised and filled with gold, and tianqi ('filled-in'), where coloured lacquer was applied to enhance details and contrast against the ground, create a sense of opulence and enchantment to the design. These techniques were particularly popular during the Ming dynasty and continued into the Qing, with many pieces bearing Qianlong marks.

Related red-ground lacquer table fashioned in the same technique, also with cusped apron and shaped 'sword' legs extending to supports at the feet, include the renown Wanli marked table in the Palace Museum Beijing, illustrated in Classics of the Forbidden City. Classics of the Forbidden city. Imperial Furniture of Ming & Qing Dynasties, Beijing, 2008, p. 142, fig. 155. Wang Shixiang observes that forms and designs of Chinese furniture did not change significantly over time, often following earlier prototypes, see Wang Shixiang, 'Development of Furniture Design and Construction from the Song and the Ming', Chinese Furniture. Selected Articles from Orientations 1984-1999, Hong Kong, 1999, p. 42.

Compare also a qiangjin and tianqi red-lacquer 'dragon' table sold in these rooms, 3 November 2018, lot 26. For tables of similar decoration using the qiangjin and tianqi techniques, see a larger example with a foliate design sold in our New York rooms, 26th March 1996, lot 281; and a taller table decorated with peonies and scrollwork sold in our London rooms, 19th September 1975, lot 138.