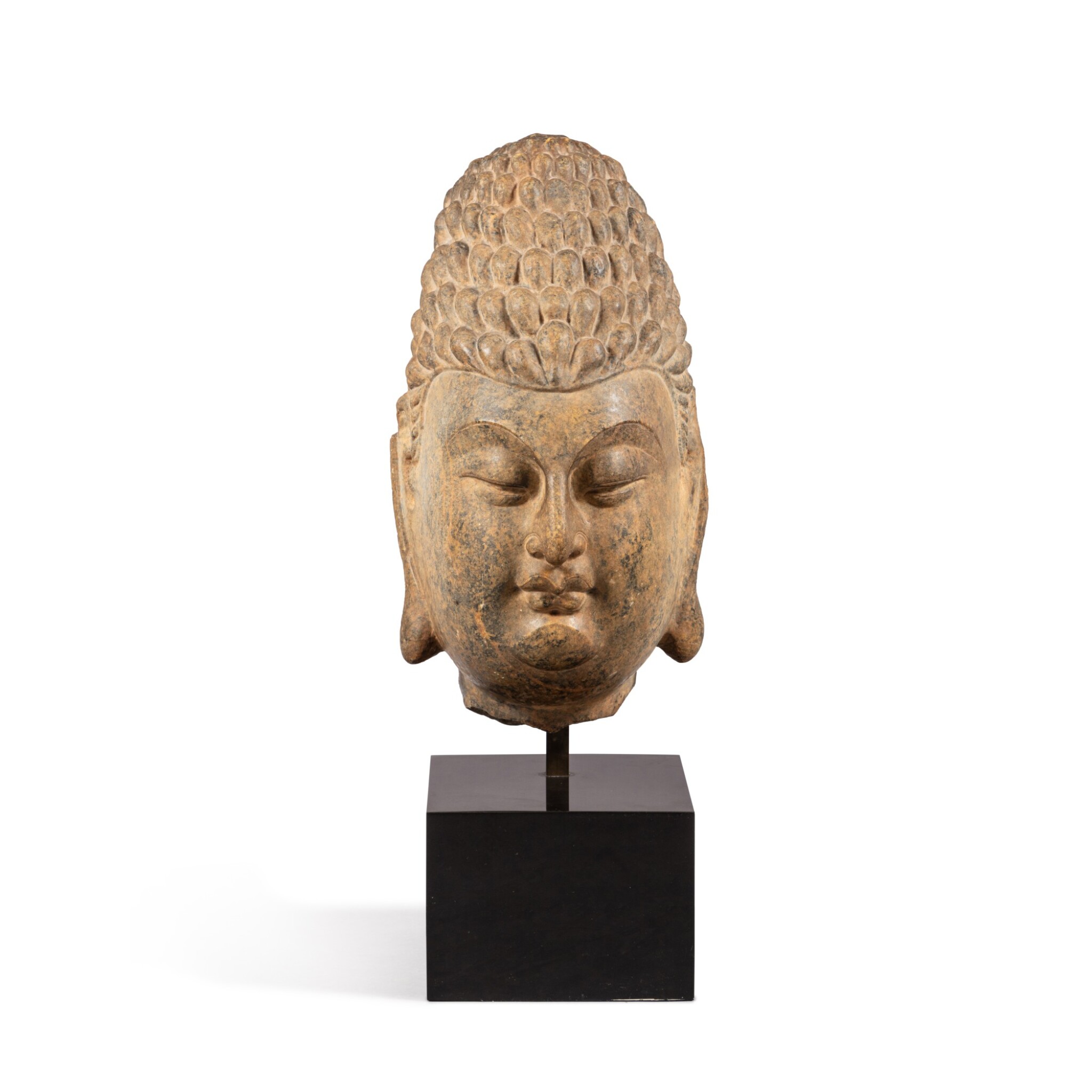 Property from the Collection of Abolala Soudavar

A monumental stone head of a Boddhisattva

The head is generally in good condition. The head is very much in its original fragmentary state and there do not appear to be any recent repairs or restorations. There are some old chips to the edges of the ears of the back of the figure as well as a few scratches to the surface on the cheeks and beneath the chin.

Previously in the collection of Dr Vercruysse, Brussels, since 1958, by repute.

Gallery Jacques Barrère, Paris, acquired at the Paris Biennale in 2010.

After the Tang, in the Five Dynasties (907-960), the Liao (907-1125), the Song (960-1279), the Jin (1115-1234) and the Yuan (1271-1368) periods, Buddhist sculptures in stone had become rarer and their styles are less well studied. This massive stone head of a Buddha is very powerful and highly idiosyncratic in material and iconography. It can be attributed to the Liao or Song dynasty by comparison with a stone head of Avalokiteshvara in the Musée National des Arts Asiatiques, Guimet, Paris (MG 26627), (fig. 1), which is dated to this period on the account of its crown, and shows a similarly broad face with strong features accentuated by single and double outlines, as well as related ear lobes.

However, whereas the Guimet figure is wearing a high crown, the present figure presents the great particularity of having its ushnisha, the enlarged upper part of the Buddha’s head, which symbolizes great wisdom, depicted as a continuous, pointed extension of the skull, rather than as a distinct, domed protuberance at the top of the cranium. Also unusual is the drop-shaped representation of coils of hair on this head. These very specific features are also found on an undated figure with a similarly elongated head and curly hairs, illustrated in an article published in Ji Chòng-jian, Thousands of years of Buddha carving history, Taiwan, 30th July 1997, pl. 216 and 217, from Mr Zhe-Jing Chen’s collection. Compare also a small pottery head similarly fashioned with a long exaggerated ushnisha extending backward from the skull, from the temple N of the Toqquz Sarai Monastery in Western China and dated to the 6th-7th century, from the Paul Peliot mission (1906-1909) and preserved in the Musée Guimet, Paris, ref. EO1079. which could indicate Western China as a possible origin for this iconography.