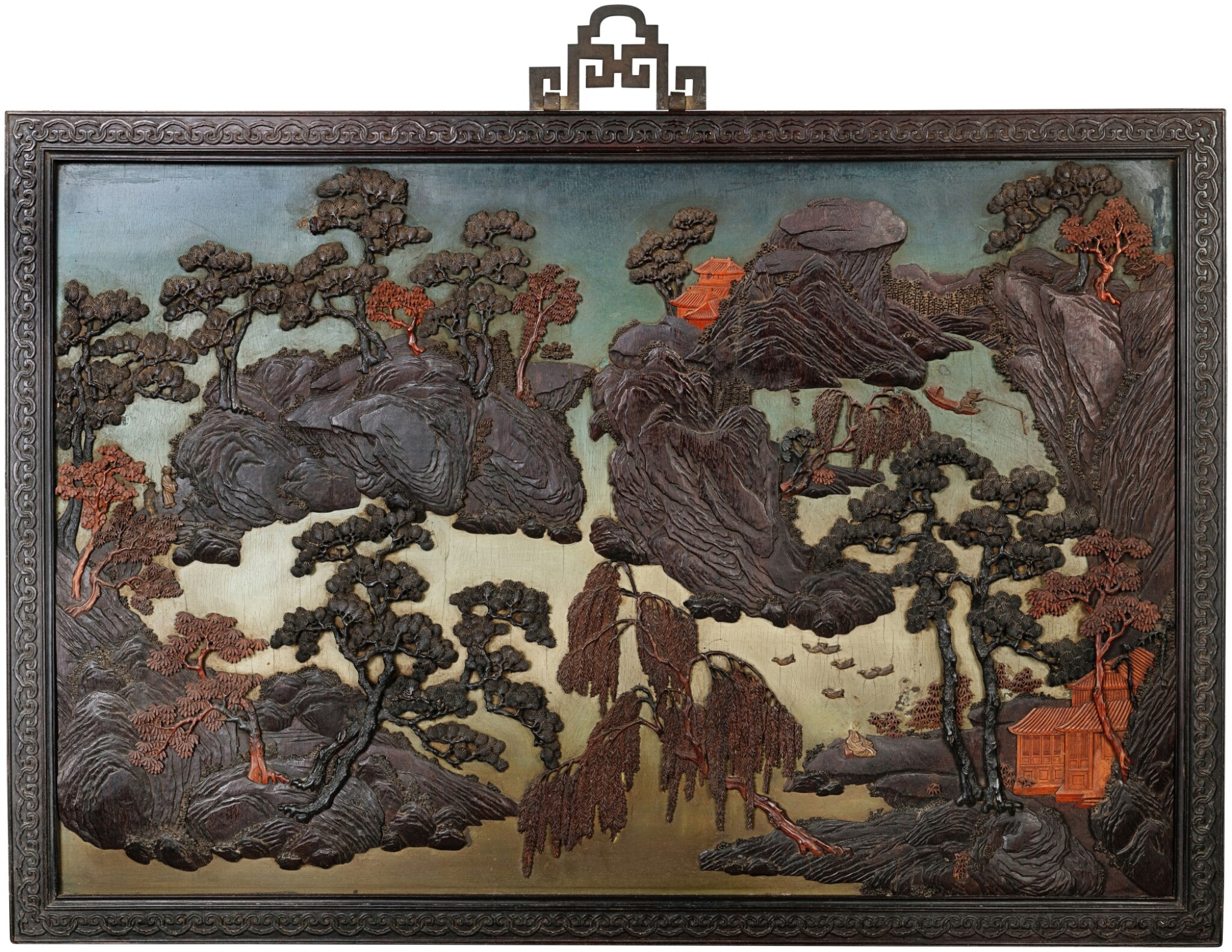 depicting a vernacular mountainous landscape composed of steep rocks from which pine trees, paulownias and weeping willows grow, the landscape animated by pagodas, palaces and bridges, the background treated in a subtle gradation going from deep blue, to white and then to ochre-green, the back of the panel lacquered in black, the zitan frame sculpted with a frieze of ruyi

The panel is very much in its original condition. There is surface wear, some crackling and soiling to the blue lacquer ground all consistent with age and visible on the photo. There are some small expected losses to the inlays, including a small section of a paulownia tree to the lower right side of the panel which is missing as well as the upper section of the inlaid figure next to it (showing on the illustration in the catalogue). There is repair to the upper branch of the willow tree to the upper right area next to the fisherman with a small section also missing and there is an old restoration in the blue ground above the boat. One of the inlaid figure to the left of the panel is missing as well as a cluster of pine needles to the top left pine tree. Further occasional minute nicks or small flakes as expected. The blue lacquer ground would probably very nicely clean to its original light blue colour after removing the dirt on it. The handle is likely to be a later replacement at the end of the Qing dynasty (compare with the handle on the other related panel from the same set we sold in these rooms in December 2020). The zitan frame is in good condition and the black lacquered back of the panel is unsealed. The scene is very well carved, especially the rocky formations which are very detailed and dramatic.

Hanging screens either carved from wood or inlaid in various materials became popular pieces of furniture in the early Qing dynasty. Often displayed in pairs or in sets, these panels adorned many halls and rooms in the private quarters of the Forbidden City or preserved in the Imperial summer retreat in Chengde where several great examples of these landscape decorative panels are preserved. Conceived as highly engaging three-dimensional paintings, hanging screens began to be produced in the Kangxi reign, but peaked in popularity during the Qianlong period, when they were made in a variety of media. The most sophisticated examples were made in the Zaobanchu (Imperial Palace Workshop), where skilled artisan often collaborated to create the most innovative works of art for the imperial court.

The frame of finely carved zitan, the most valued timber available to wood carvers and furniture makers, makes this panel particularly special. Zitan was the favoured timber of the Ming and Qing court, and its long growth period and limited availability made it especially valuable. Its silky texture and fine dense grain made it ideal for intricate carving as it allowed craftsmen to successfully capture texture, evident here in the rendering of distant hills and rocks. The subtle and deep lustre of the wood and its characteristic chestnut colour, which turns purplish-black after prolonged exposure to air, was fully exploited on this panel through its contrast with the lighter boxwood and coloured background.