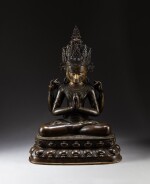 A copper-alloy figure of Sadaksari Avalokitesvara

with traces of cold gold on the face and neck

Traces of blue pigment to the hair. There are losses to the attributes on both sides. There are some typical casting flaws, notably some holes to the neck, the wrists, the left foot and to the base, the largest to the back of the base 2.8 x 4.5 cm. The tall crown leaves and tip of the crown are partially restored. There are some small dents and nicks to the raised parts and to the edges. All are consistent with age. The base is unsealed.

Often thought to have a western Tibetan origin, this type of early Tibetan sculpture is more likely to be from the central regions where the primary stylistic influence was the art of eastern India during the Pala period (8th-12th c). Features in the Pala idiom include the tall crown panels, the necklace of pendant gems with an elaborate central jewel setting, and the fishtail scarf-ends of the crown- and belt-ties: compare the tall crown panels and necklace type of a ca. 12th century eastern Indian standing Buddha from Kurkihar see Susan L. Huntington, The Pala-Sena Schools of Sculpture, Leiden, 1984, pl. 185. The Pala influenced style seems to have been popular in Tibet from around the twelfth through the fourteenth century, about the same time period that strong eastern Indian influence is seen in central Tibetan painting. The bronzes in this style are mostly un-gilded, like their Indian antecedents. Central Tibetan sculpture after the fourteenth century is increasingly gilded in the Nepalese manner. Compare a similar fourteenth century Vairochana in the Berti Aschmann Collection at Museum Rietberg, with tall crown leaves, the same type of necklace with large central element and gem-set pendants, and arm bands with beaded swags, all so typical of this early central Tibetan sculptural group, see Helmut Uhlig, On the Path to Enlightenment, Zürich, 1995, p. 65, cat. 25. The four-armed bodhisattva holds a rosary and flower stem in his upper hands, with his principal hands held together before the chest in the gesture of salutation, anjali mudra. Sadaksari Avalokiteshvara is often regarded as the patron of Tibet and the progenitor of the Dalai Lama lineage.