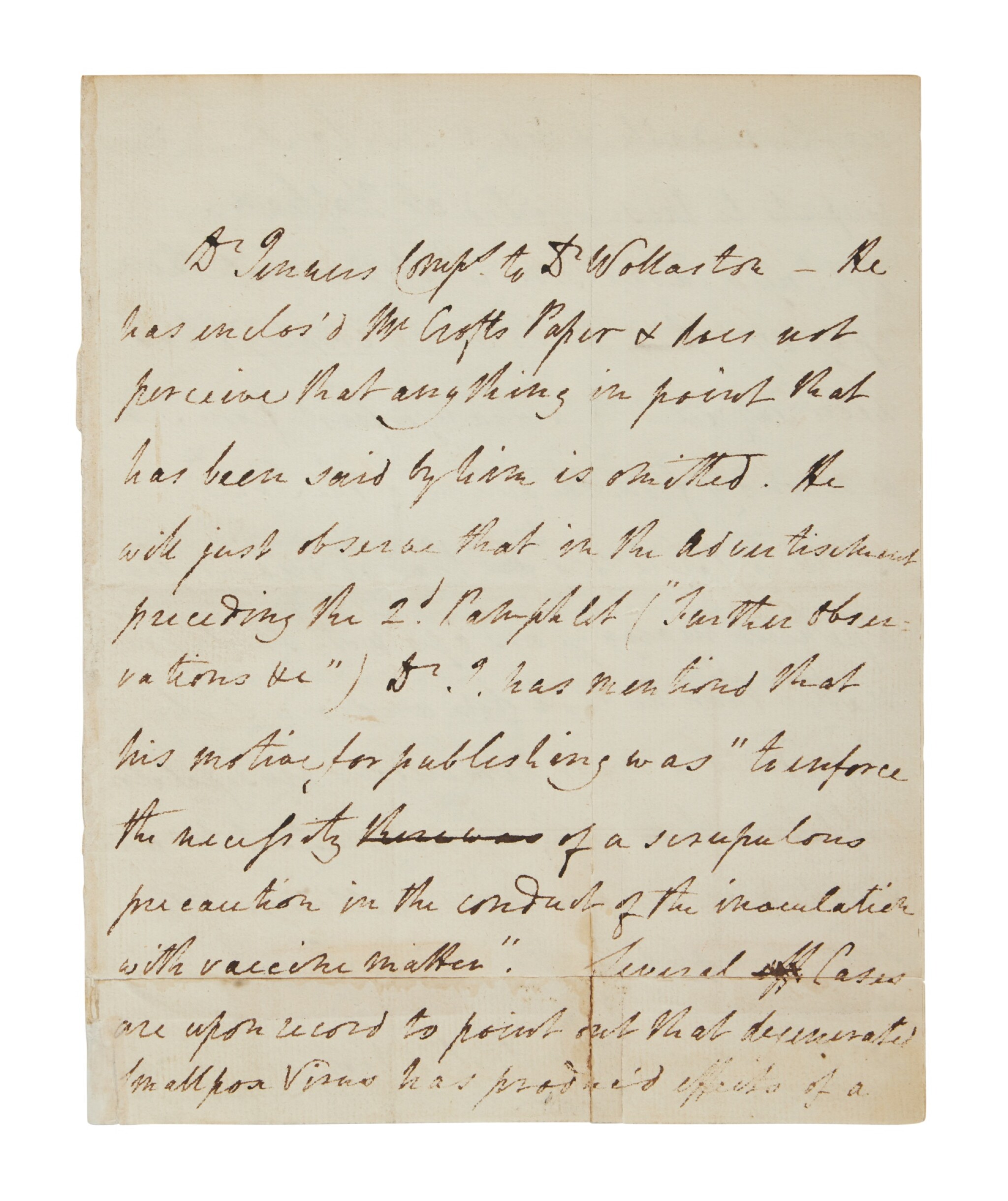 A remarkable letter by Edward Jenner, the father of immunology, to Dr. William Hyde Wollaston, addressing the importance of "vaccine matter."

Edward Jenner famously developed the world's first successful vaccine after observing that milkmaids were generally immune to the smallpox virus. The terms "vaccine" and "vaccination" were coined by Jenner, and were derived from the latin Variolae vaccinae, or, "pustules of the cow" to denote cowpox (it was the puss from cowpox blister that was used in smallpox inoculations). Jenner used the terminology in the title of his 1798 paper "Inquiry into the Variolae vaccinae known as the Cow Pox, in which he described the protective effect of cowpox against smallpox," and the Oxford English Dictionary cites 1800—the date of the present letter—as the first general usage of the term "vaccine." Jenner is often referred to as the "the father of immunology," and his pioneering research has inarguably saved more lives than the work of any other human.

In the present piece of correspondence, Jenner writes to Dr. Wollaston, assuring him first through the words of the advertisement of his second paper, "Further Observations on the Variolae Vaccinae, or Cow Pox" (1799), that "his motive for publishing was 'to enforce the necessity of a scrupulous precaution in the conduct of the inoculation with vaccine matter'." Jenner, continuing to write in the third person, cites cases where a "degenerated Smallpox Virus" has been used: "Several Cases are upon record to point out that degenerated Smallpox Virus has produc'd effects of a very formidable kind & similar in many respects to those excited at Clapham. Mr Tryes Cases somewhat resemble them (page 87)[.] The Virus he employ'd had been subjected to a change first from Time, & secondly from the action of the Fire*." The asterisk directs Wollaston to the following footnote: "*Dr J has frequently witness'd that even the gentle action of Fire upon the vaccine fluid has altered its properties."

The letter continues with the same specificity, offering particulars related to the relative stability and purity of vaccine matter: "During the heat of last Summer, some dairy people were exposed to the infection (by milking) of the Cowpox in a very putrid state, & here a train of Symptoms came on similar to those at Clapham, & those excited with S.P. Virus by Sr W.F. namely, erysipelas ulceration anasarea. These Patients were not the less susceptible of S.pox-contagion, which at first excited some wonder in the neighbourhood. Is the general Mass of the animal fluids capable of undergoing changes spontaneously which will produce these effects, or do they depend upon their having originally possess'd specific properties?"

On 21 November 1800, the day before the present letter was written, Dr. Wollaston—a distinguished physiologist, chemist, and physicist—had published a commentary favorable to Jenner in the Medical and Physical Journal.  Wollaston had recently witnessed results "very unlike those we have ever seen or heard of in the Cow-pox" after observing the vaccination of parishioners in Clapham (a copy of this commentary is included with the present lot).

In terms of offering evidence of the early formulation, production, and standardization of vaccines, the present letter is invaluable. Through this correspondence, Jenner and Wollaston are demonstrating a clear preoccupation with regulating the manner in which vaccines are compounded and distributed in order to make inoculation as effective as possible, and also to allay public anxiety surrounding this new science.

An extraordinary letter, anticipating over two centuries of vaccine controversy.

The present letter to Wollaston, as well as the following lot, were first published in the Vaccination Inquirer (London: 1900, pp. 139-140).