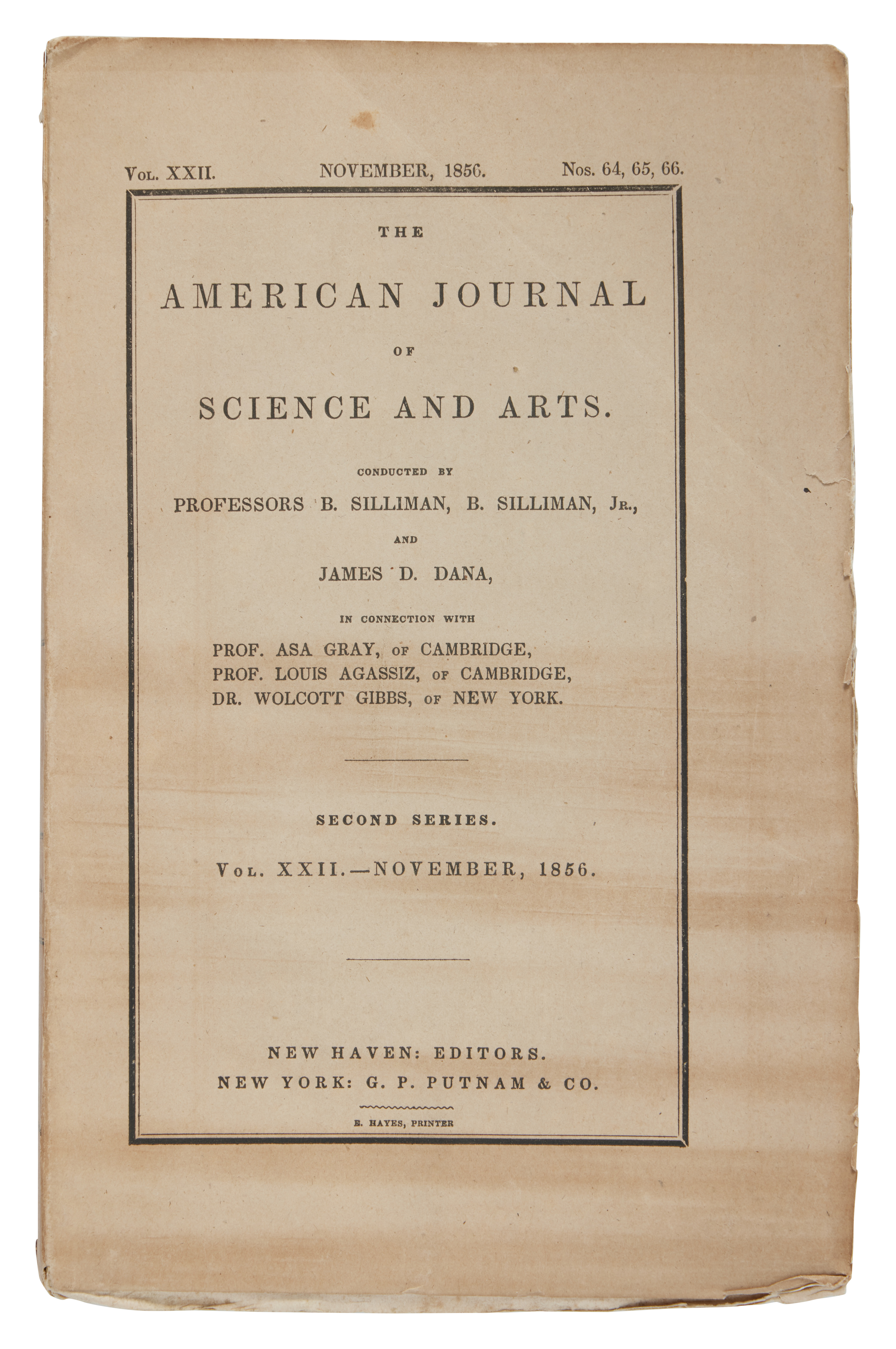 First printing of the first true discovery of "greenhouse gasses," predicting that "an atmosphere of that gas would give to our earth high temperature."

The present paper was read aloud for Foote (not by her) before the American Association on 23 August 1856, and yet, the credit for the discovery of Greenhouse gases has been given to Svante Arrhenius, who did not write about the Greenhouse effect until 1896, a full 40 years after Foote's announcement. Incidentally, Arrhenius would go on to be awarded the 1903 Nobel prize in chemistry, and made director of the Nobel Institute in 1905.

The reality of the earth's rising temperature was very much felt in Foote's day. Henry Morley, a physician who often contributed to Charles Dickens's Household Words, in 1851 observed in his article "Foreign Airs and Native Places," that the climate of London was:

"peculiar; paving and drainage, radiation of heat from stone and brick, make it much drier than the open country. It is, on the average, a degree and a half warmer than the surrounding country; not so hot during the day, because a veil of smoke impedes the sun’s rays, but during the night warmer: the wintry nights in London are nearly four degrees warmer than the same nights in the country. If London were well drained and Londoners could drink good water, it is probable that in the matter of climate the advantage to the population of a more equable, warmer, and drier air, would counterbalance the evil of its smoke" (Morley 447).

Morley makes special note of the bricks and stones, and of the smoke that blots out the sun. London stands in contrast to the countryside because it is divided—compartmentalized within itself. Dickens, Morley's friend and sometimes collaborator, was persuaded by this observation, and addressed these themes through Little Dorrit (see lot 1020), exploring the accelerated and artificial climates urban environments were breeding.

Ignored by John Tyndall and Arrhenius, and unknown even to James Roger Fleming, Foote’s paper was the focus of a groundbreaking exhibition “From Eunice Foote to UCSB: A story of women, science, and climate change”, University of California (Santa Barbara) 2019–20.