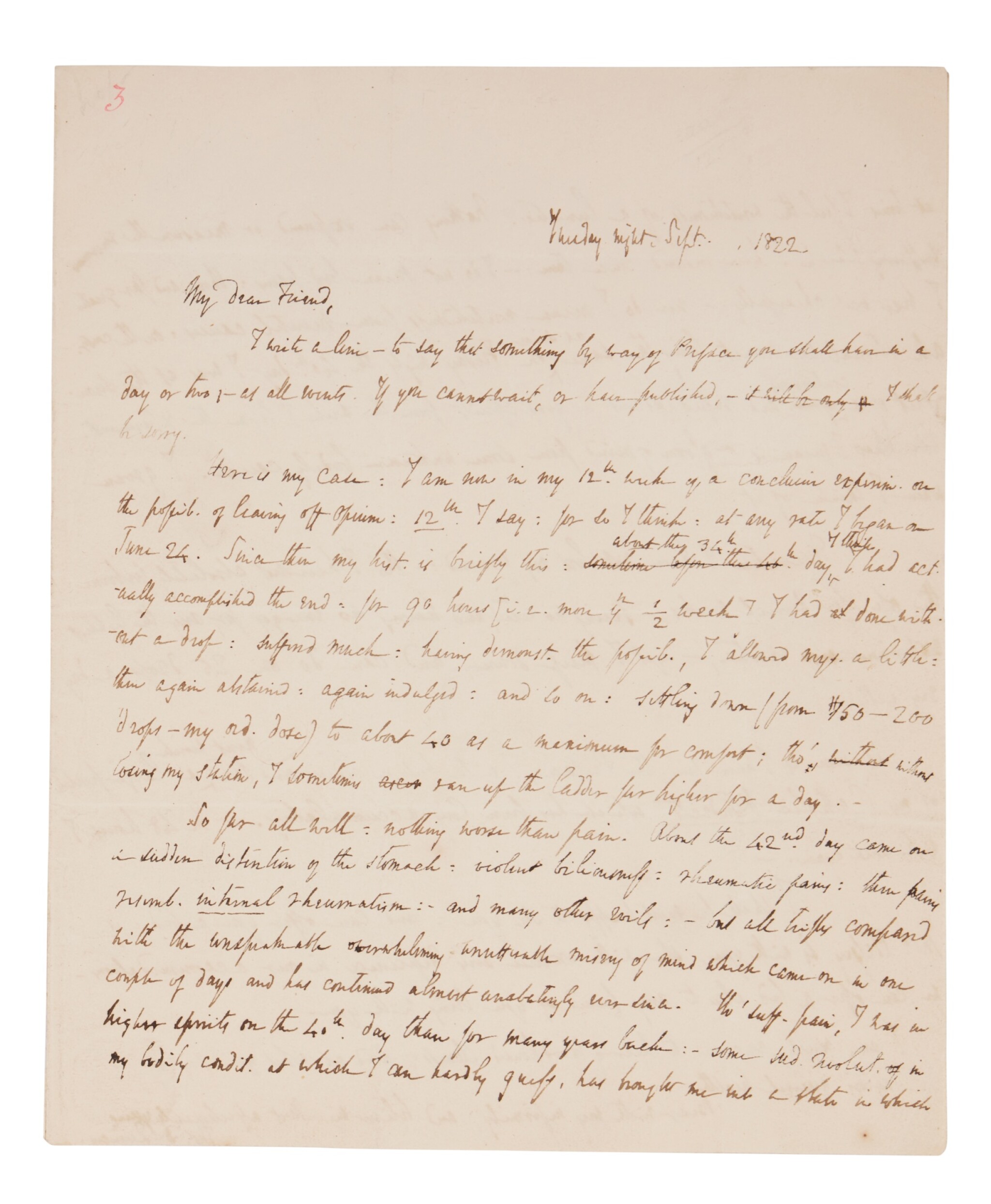 De Quincey attempts to curb the addiction he detailed in Confessions of an English Opium-Eater as the memoir’s book publication nears.

Writing to J. A. Hessey, bookseller, publisher and then owner of London Magazine (wherein Confessions was first serialized), De Quincey says that he will be writing “something by way of preface in a day or two” and then apologizes for his delay if “you cannot wait or have published.” It was during this time that Hessey was preparing the book publication of Confessions, in response to the public’s appetite following its periodical appearance in his magazine over two issues the year before. Indeed, what is now acknowledged as the first drug confessional, an autobiographical genre that is now so commonplace, was seen as a sensational fiction by the reading public, who felt that the elating intoxication and pains described must surely be purely of De Quincey’s imagination.

The present letter reinforces the ongoing struggle of his opiate addiction, an unrelenting burden neither money nor new fame could cure (the fact his first book was about to be published is nowhere near the front of mind). The author goes into pained detail on his attempts to at first free himself from habitual use entirely, only to at last settle for a time on a maintenance dose to keep the intense physical discomfort at bay.

“I am now in my 12th week of a conclusive experiment on the profit of leaving of leaving off opium … for 90 hours I had done without a drop: suffered much: having demonstrated the possibility, I allowed myself a little and then again abstained: and again indulged: settling down (from 50-200 drops – my ordinary dose) to about 40 for a minimum for comfort …”

While the physical discomfort was made somewhat bearable, the psychological torment that ensued from De Quincey’s intermittent fast was far, far worse. He describes “the unspeakable, overwhelming, untenable misery of mind that continued unabatedly ever since … I groan when I think of it ...”

It was this “wretchedness of a lunatic” in his mental anguish, rather than the physical torment, that prevented De Quincey from ever fully breaking the addictive cycle that traps so many.

The present letter is the most detailed of his opiate struggles to come to market and a compelling account of a modern problem.