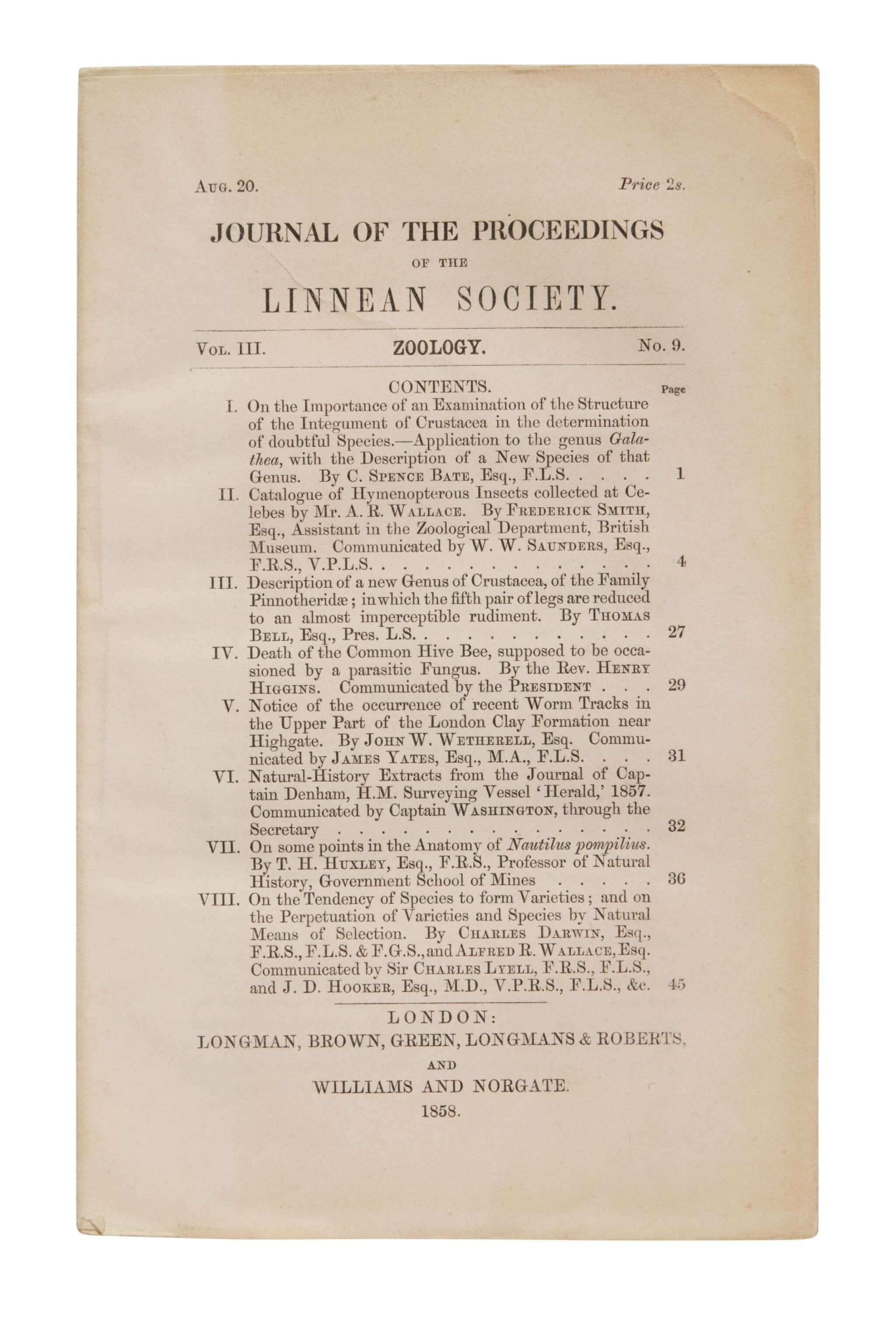 "On the Tendency of Species to form Varieties; and on the Perpetuation of Varieties and Species by Natural Means of Selection" [1858-59] pp. 45-62, contained in: Journal of the Proceedings of the Linnean Society, Vol. III, No. 9. London: Longman, Brown, Green et al, 1859

First edition of the joint announcement of Darwin and Wallace's theory of evolution by natural selection: an immaculately preserved copy. After postponing for many years publication of his own research, Darwin was startled to learn that Alfred Wallace had independently arrived at a nearly identical hypothesis about the development of species. After reading the paper on species divergence that Wallace sent to him from the Spice Islands, Darwin confessed to Charles Lyell, "I never saw a more striking coincidence; if Wallace had my ms. sketch written out in 1842, he could not have made a better short abstract! Even his terms now stand as heads of my chapters. ... So all my originality, whatever it may amount to, will be smashed ..." (18 June 1858).

Lyell and Joseph D. Hooker suggested that the two naturalists present their findings simultaneously, and they read Darwin and Wallace's joint announcement of their theory to the Linnean Society on 1 July 1858. When the co-authored paper was published the following month, Lyell and Hooker provided a brief introduction that sought to establish Darwin's priority: "These gentlemen having, independently and unknown to one another, conceived the same very ingenious theory to account for the appearance and perpetuation of varieties and of specific forms on our planet, may both fairly claim the merit of being original thinkers in this important line of inquiry; but neither of them having published their views, though Mr. Darwin has for many years past been repeatedly urged by us to do so, and both authors having now unreservedly placed their papers in our hands, we think it would best promote the interests of science that a selection from them should be laid before the Linnean Society." The joint papers—appearing in order of composition, so as to further promote the idea of Darwin's priority—comprise a brief extract from Darwin's manuscript "on Species"; an abstract of an 1857 letter from Darwin to the American botanist Asa Gray; and Wallace's paper "On the Tendency of Varieties to Depart Indefinitely from the Original Type."

As described by Freeman, "there are five different forms in which the original edition can be found, but they are all from the same setting of type." In accordance with the normal publishing customs of the Linnean Society, this number of the Journal was initially issued as the Zoology part alone in pink wrappers, as with the present copy [Freeman 347], or it was issued alongside the Botany papers in blue wrappers to those subscribers who took both parts [Freeman 346]. It was then included in the annual volume of the Journal published later using reserved stock, once again as Zoology alone [Freeman 351] or with the Botany part [Freeman 350]. The fifth form is the author's offprint [Freeman 348], which has "From the Journal of the Proceedings of the Linnean Society for August 1858" added to p.45.

This high spot in the history of science is extremely rare in the market in original wrappers. Only two copies have appeared auction in the last 20 years.