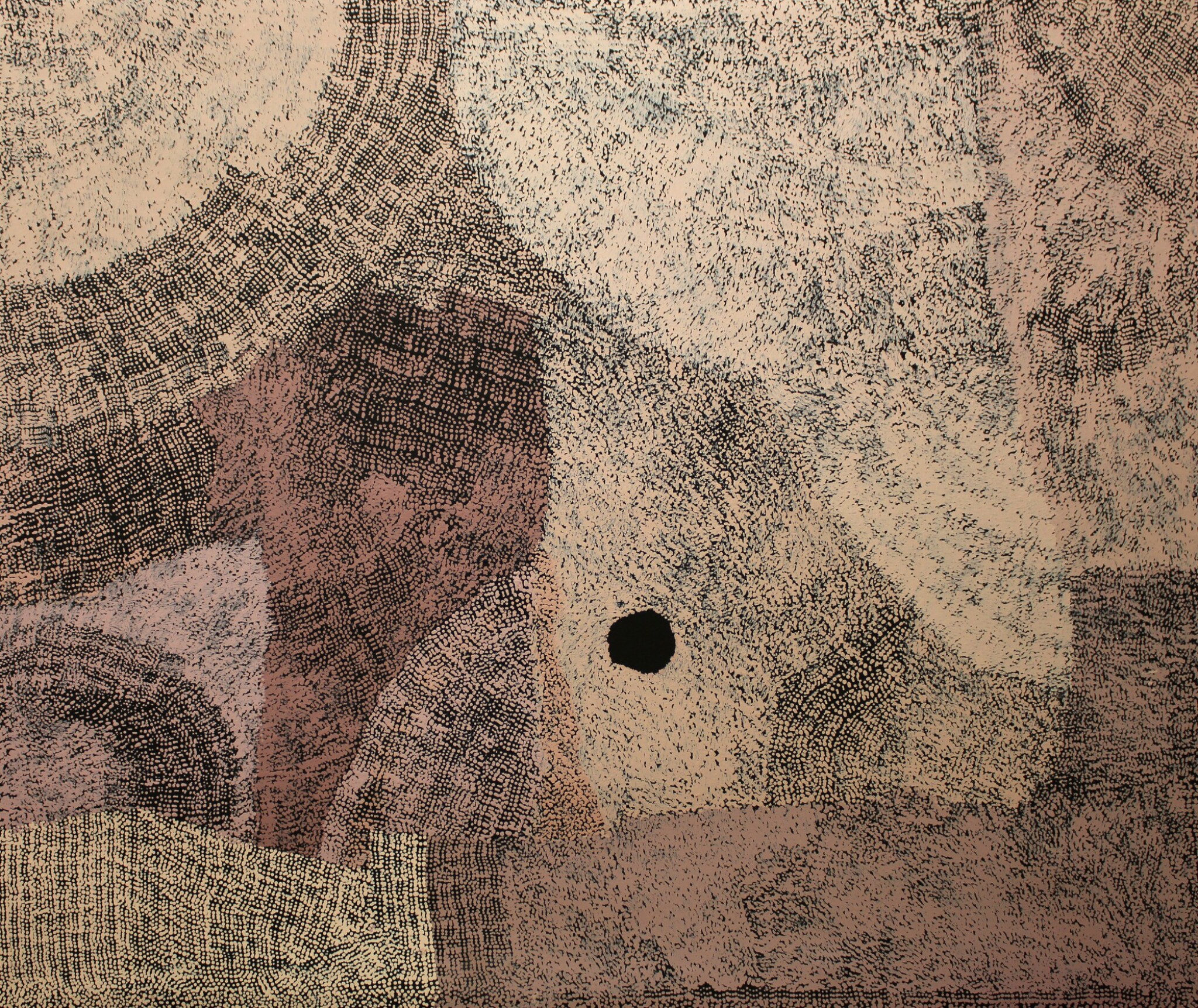 The painting is unframed and appears in excellent condition overall with no visible repairs or restorations.

Pepai’s early life coincided with a period of dramatic social change for Western Desert Aboriginal people. Born in the winter of 1950 at the Lutheran Mission of Haasts Bluff, Pepai – like so many people of his generation – was forced to live far from the country for which he held customary cultural rights. A number of competing factors, including drought, pastoralism and dwindling Aboriginal populations, prompted the gradual transition of desert people from a seasonal life on the land and into government settlements, missions and communities.

While living at Haasts Bluff, Pepai’s father, Henry Paripata Tjampitjinpa, travelled long distances collecting and selling Dingo (Canis lupus dingo) pelts to support his growing family. As a young boy Pepai accompanied his father on one such trip during which they visited Paripata’s birthplace at the soakage water site of Ininti. It was here – Pepai would later learn – that the ancestral Kungka kutjarra (Two women) entered the earth, resulting in the creation of a semi-permeant water source that generations of Pintupi people continue to rely upon. It was a journey that left an indelible mark in Pepai’s mind, the significance of which would intensify with each passing year.

It wasn’t until 2017 that Pepai finally had the opportunity to return to Ininti, this time as an elderly man and accomplished artist. Upon arrival at Ininti, Pepai requested the soakage area be cleared and a deep hole dug. After hours spent digging water finally gathered at his feet, causing this gentle man of the desert to smile with quiet joy. After many years, and right before his eyes, his country was once again awoken within. Pepai’s triumphant return to country inspired a series of painting and ceramics. Ininti, 2017 is fine example of this important period in the artist's life. His singular style, emboldened by this journey, is characterised by a highly gestural dotting action that brings the surface of the painting to life.

﻿Luke Scholes is former curator of Aboriginal art at the Museum and Art Gallery of the Northern Territory. He has curated multiple award-winning exhibitions and written extensively about Aboriginal art.