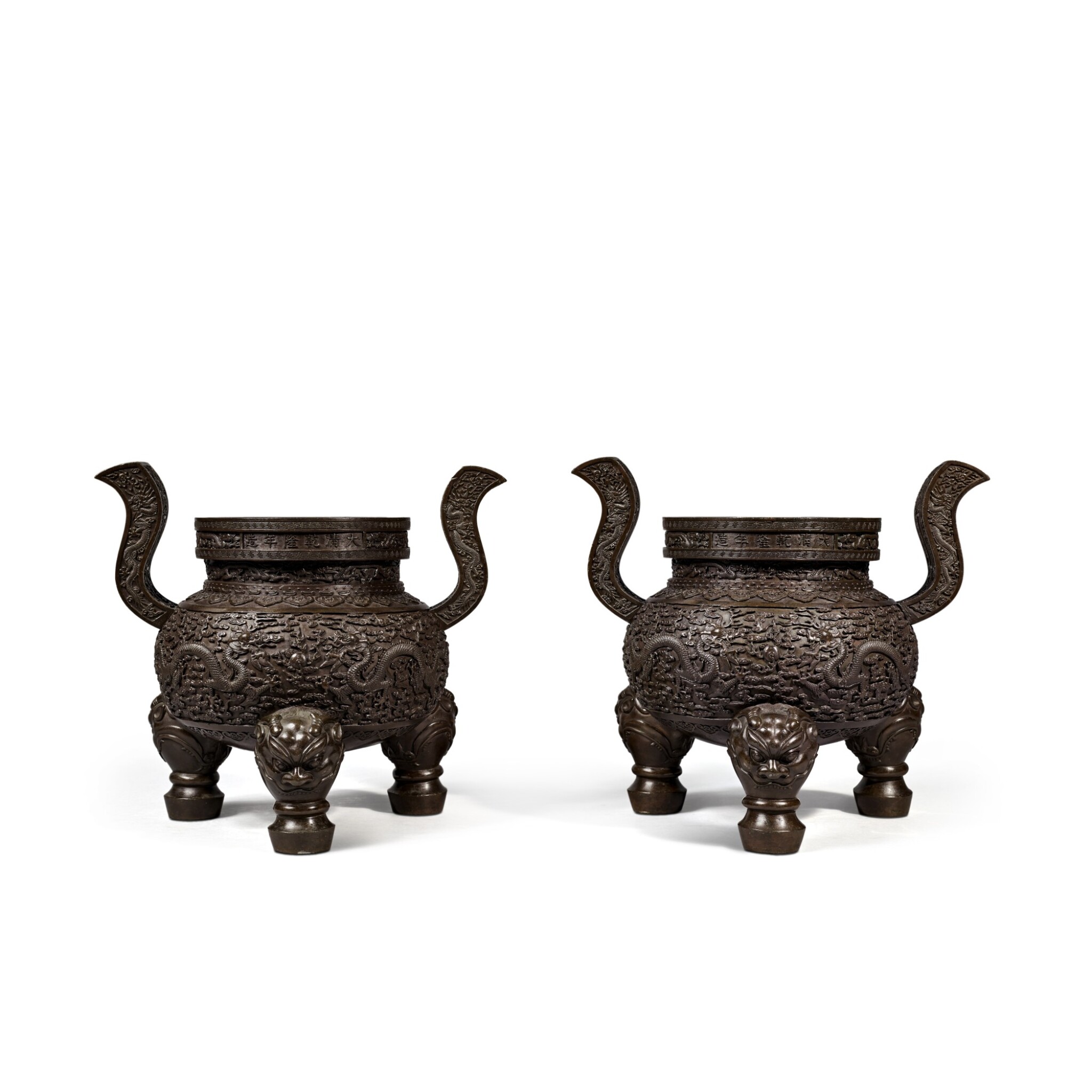 Marks and period of Qianlong

In excellent condition. Some slight movement to all four handles; small nicks to the rims, corners of handles and edges of relief casting as commensurate with age and use.

Because this lot was imported into the United States after September 1, 2020, it is subject to an import tariff of 7.5% of the value declared upon entry into the United States. $9,375, plus applicable sales tax will be included on your invoice unless you instruct Sotheby's to arrange shipping of the lot to a foreign address. For more information on the import tariff, please review the Symbol Key in the back of the catalogue. If you have any questions, please contact tariffs@sothebys.com。

This pair of censers embodies the grandeur and power of the Qianlong reign (1736-95) through their striking shape and lavish decoration. They draw from archaism, as seen in the overall shape inspired by ritual bronze ding vessels of the Eastern Zhou period (770-256 BC), and combine this with the quintessential Qing dynasty imperial motif of scaly dragons striding through a dense field of swirling clouds. The elongated handles that extend dramatically in an S-curve from the globular body, on the other hand, are a feature that originated around the Song dynasty (960-1279). Integrating old and new design elements, these remarkable vessels are characteristic of imperial ritual bronzes of the Qianlong period which synthesize the Emperor’s dual interests in archaism and novelty.

Censers were made in a wide range of sizes to suit the needs of different settings and occasions. The present pair might have stood in one of the important rooms in the Imperial Palace, in which incense would have been burnt to disperse insects and provide a pleasing aroma. Some censers might have been produced for altars or temples in the Palace as part of a five-piece altar garniture (wugong). See, for example, a censer of closely related design and form, but of monumental size, measuring 94.5 cm in height, preserved in the British Museum, London (acc. no. OA+.7057.a).

Dragons amongst clouds were an important imperial design element since ancient times, symbolizing the emperor's righteous rule over the universe. The five-clawed dragons in pursuit of a ‘flaming pearl’, as seen on the present piece, were a particularly popular subject on pieces made for the Qing Court. Occasionally, bronze vessels of this type were decorated with phoenixes, indicating that they may have been commissioned as a tribute to the empress or the empress dowager. See a large pair of Qianlong-marked bronze vases, decorated with both dragons and phoenixes sold three times in our Hong Kong rooms, most recently on 9th October 2007, lot 1322.