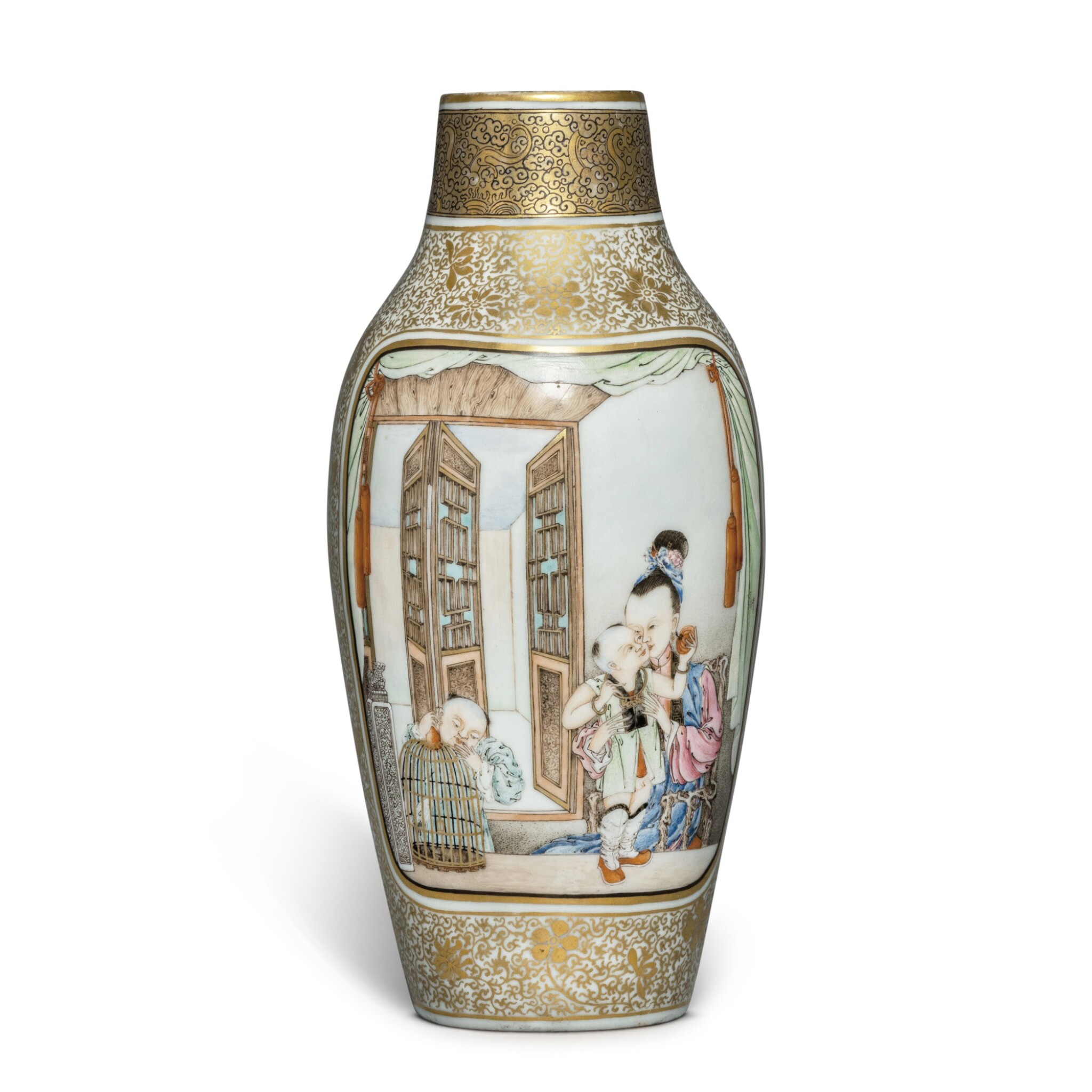 The very thin porcelain body in good general condition with the exception of a forked hairline to the rim measuring approximately 48mm, and a 2mm nick to the rim. Some light wear to gilding.

Because this lot was imported into the United States after September 1, 2020, it is subject to an import tariff of 7.5% of the value declared upon entry into the United States. $3,750, plus applicable sales tax will be included on your invoice unless you instruct Sotheby's to arrange shipping of the lot to a foreign address. For more information on the import tariff, please review the Symbol Key in the back of the catalogue. If you have any questions, please contact tariffs@sothebys.com.

The subject matter, richly detailed architectural elements and European-influenced perspective seen on the present vase reflect the trend for scenic illusion paintings that found favor at the court of the Qianlong Emperor (r. 1736-95). The Italian Jesuit court painter Giuseppe Castiglione (1688-1766) and his students were commissioned to paint dozens of large-scale scenic illusion paintings to adorn the palaces of the Yongzheng and Qianlong Emperors, and related scenes of ladies and children within elegantly appointed interiors can be seen on panels painted for the Yanghe Jingshe and the Yucuixuan at the Forbidden City, both included in the exhibition The Emperor's Private Paradise. Treasures from the Forbidden City, Peabody Essex Museum, Salem, cat. nos 44 and 53.

In its painting style and subject matter, the present vase also relates to a special group of wares that were influenced by European enameled pieces which were imported to the court, often as tribute to the emperor. The style of painting is closely related to 18th century prints and engravings from Europe, particularly in the stippling effects to produce shading and differentiation of depth and form in the figures and background details.

Variations of the theme of the 'mother and child' painted on porcelain incorporating European-influenced perspective include a small group of falangcai dishes, painted with gilt kuilong and lotus borders, including two in the National Palace Museum, Taipei; the first included in the exhibition Emperor Ch'ien-lung's Grand Cultural Enterprise, National Palace Museum, Taipei, 2002, cat. no. V-16; the second illustrated in Special Exhibition of Ch'ing Dynasty Enamelled Porcelains of the Imperial Ateliers, Taipei, 1992, cat. no. 118.