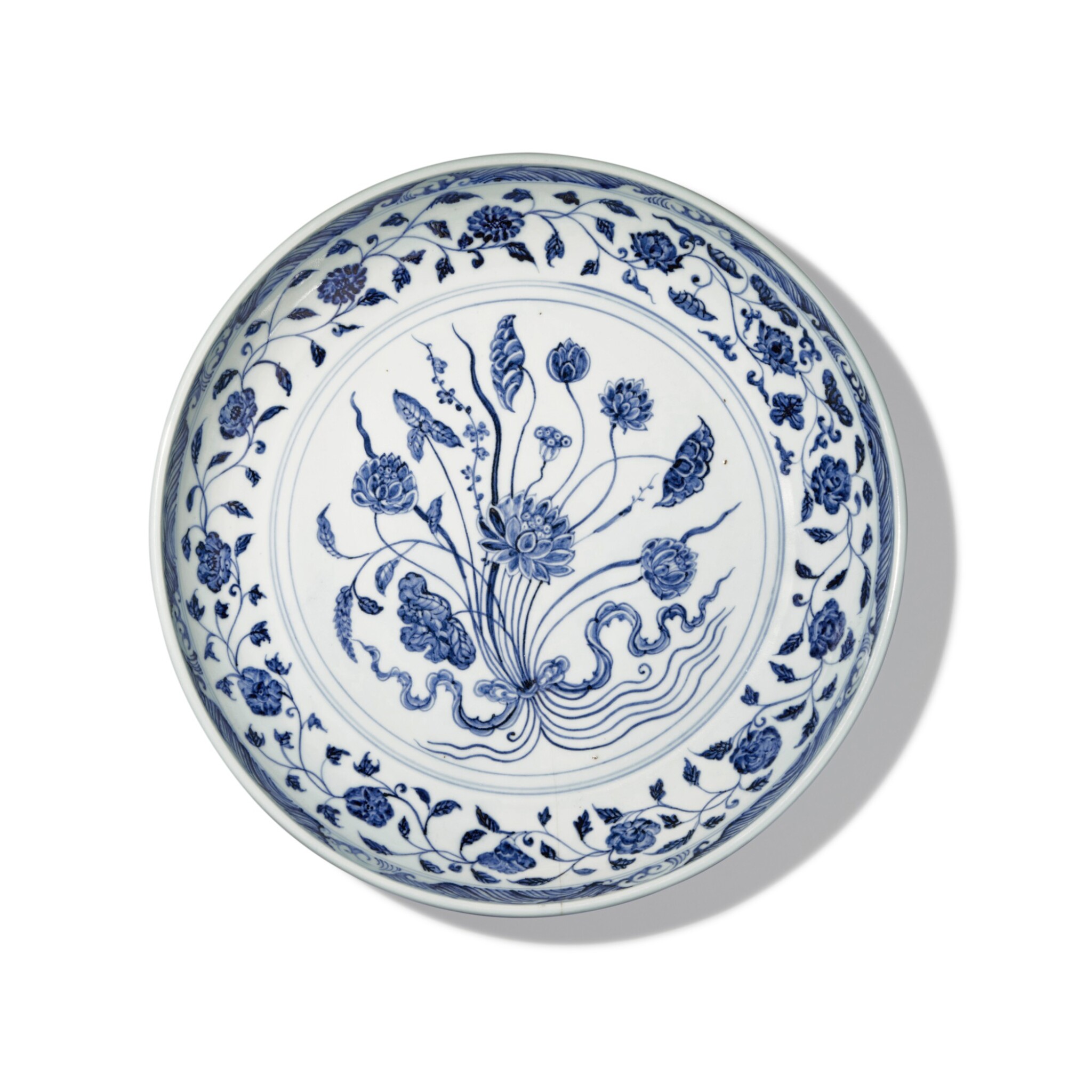 In very good condition with the exception of a 14cm crack to the rim. Minute firing imperfections elsewhere, consistent with period of production.

Because this lot was imported into the United States after September 1, 2020, it is subject to an import tariff of 7.5% of the value declared upon entry into the United States. $9,375, plus applicable sales tax will be included on your invoice unless you instruct Sotheby's to arrange shipping of the lot to a foreign address. For more information on the import tariff, please review the Symbol Key in the back of the catalogue. If you have any questions, please contact tariffs@sothebys.com.

Blue and white chargers of this shape and design represent the most classic decorative repertoire of the Yongle period. The lotus bouquet motif, with its unexpected combination of lotus flowers, leaves and water weeds, tied with a ribbon, evokes strikingly colored lotus ponds in full bloom during summer. Such designs were often executed with slight variations on the rim which could vary between a wave, classic scroll or keyfret border. Compare a similar charger rendered with this design from the National Palace Museum, Taipei, included in the Museum’s exhibition Shi yu xin: Mingdai Yongle huangdi de ciqi / Pleasingly Pure and Lustrous: Porcelains from the Yongle Reign (1403-1424) of the Ming Dynasty, Taipei, 2017, p. 67.

These dishes or chargers were popular and widely exported to the Middle East with the expansion of trade routes during the Yongle reign, as demonstrated by the abundance of such examples in the Middle Eastern collections. Thirty-four 'lotus bouquet' dishes are recorded in the collection of the Ardabil Shrine in Iran, including seven with the same wave design on the rim, as published in John Alexander Pope, Chinese Porcelains from the Ardebil Shrine, Washington, D.C., 1956, pls 30 and 31. Compare also a dish illustrated in Regina Krahl and John Ayers, Chinese Ceramics in the Topkapi Saray Museum, Istanbul, London, 1986, vol. II, no. 604.