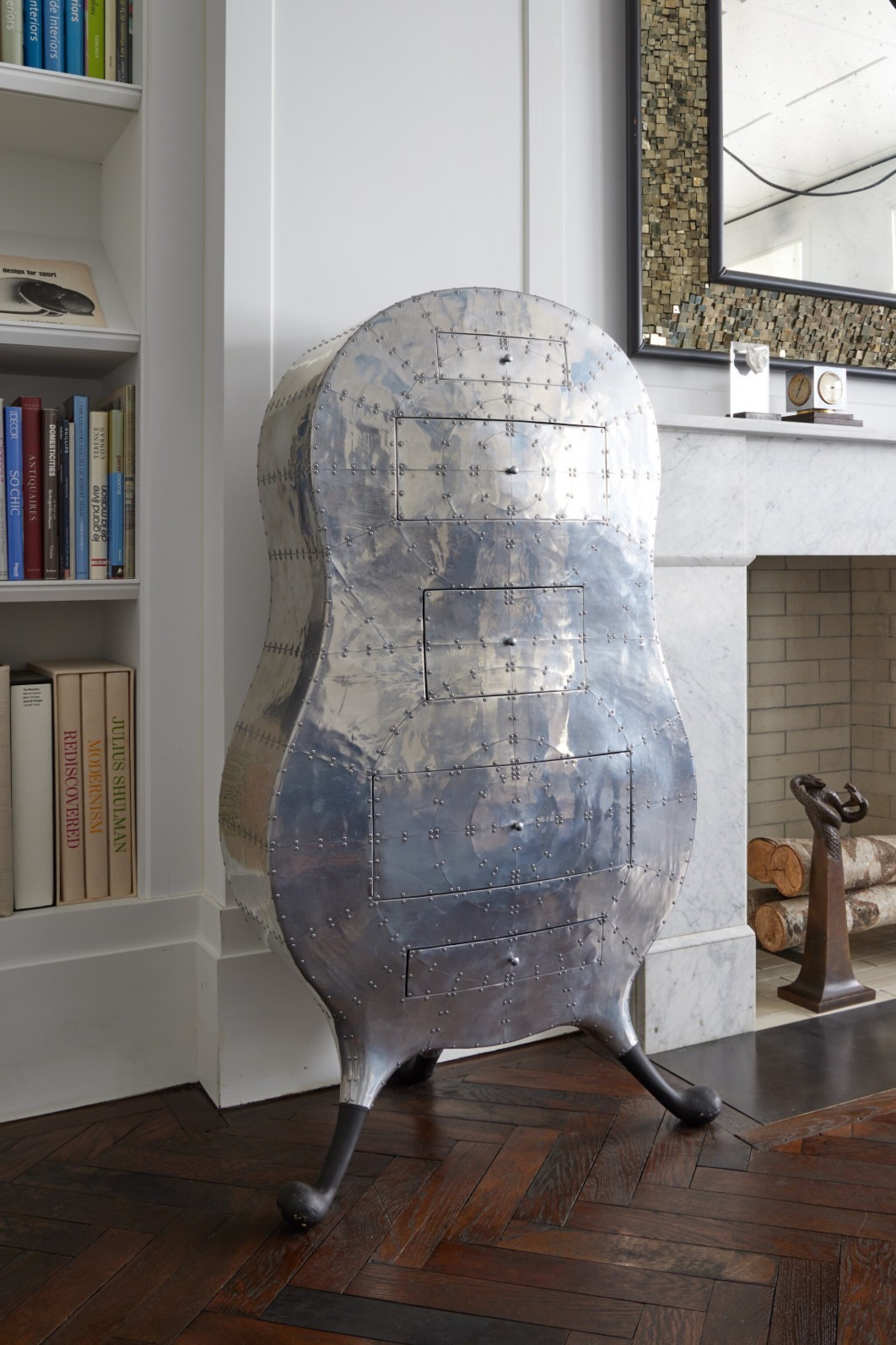 Overall in very good condition. This well-preserved example of Marc Newson's iconic "Pod of Drawers" displays stunning visual presence when viewed firsthand. The riveted aluminum surfaces exhibit a subtle irregular, hammered surface, inherent to the production and underscoring the handmade quality of this work. The outer surfaces of the cabinet appear in untouched original condition and display with a rich and nuanced patina inherent with age. The aluminum with scattered minor surface scratches, abrasions and faint scuffing, and with some occasional minor areas of oxidation and discoloration consistent with age. The Pod is outfitted with five working drawers. The edges of two drawers with small indentations, not visible unless the drawers are open. The corner of one drawer exhibits some very slight bending, not visually distracting and not detrimental to function. The feet present with a black paint finish in very good, well-preserved condition, with some occasional scattered paint losses and discolorations to the paint consistent with gentle use. A superb example from this seminal series by Marc Newson.

In terms of form, the Pod’s most radical departure from Groult’s chest are its three bulbous feet. These, like the riveted aluminum, were carried over from the LC1 lounge, the centerpiece of Newson’s 1986 gallery debut, “Seating for Six.” Freshly graduated from Sydney College of the Arts, where he studied sculpture and jewelry design, Newson had managed two remarkable feats: a $10,000 Craft Council grant (based on an imaginary body of work) and a solo show at Rosyn Oxley9, one of the most important galleries in Australia. Titled in homage to Le Corbusier—at the time, Newson was “obsessed with furniture, particularly Modernist furniture designed by architects”—the LC1 lounge was the first piece he made for the exhibition. He wanted to bring to life, in the form of a chair, a mental image he had of a liquid-like form resembling a blob of mercury. After several iterations, the LC1 took shape with a rolled, tubular headrest, subtly referencing the chaise on which Madame Recamier is seen reclining in Jacques-Louis David’s 1800 portrait. Despite this Neoclassical flourish, the initial concept behind the LC1 had been the type of amorphous, organic shape that would become a recurring theme in Newson’s career.

Lacking the means to produce the smooth metal surface he had envisioned, Newson improvised with cut pieces of aluminum sheeting. Using a silversmithing technique learned at art school, he hammered out each sheet on a leather sandbag and then fitted, cut, filed, drilled, and attached it to the form with blind rivets. The choice of rivets over adhesive was semi-arbitrary. From the outset, the piece was destined to have an aerodynamic feel, and the retro aircraft look was a welcome—though unplanned—result. “What the rivets did,“ Newson said, “was make it scream out, to a far greater degree than I’d ever imagined.”

Though commonly referred to as the prototype of the Lockheed Lounge (which was made two years later), the LC1 was a one-off piece that would more accurately be described as the Lockheed’s predecessor. The aesthetic vocabulary that was born with the LC1 continued into the Pod of Drawers and culminated in the Lockheed. For this reason, the Pod can be considered not only a companion piece to the Lockheed, but an indispensable precursor.

After completing the LC1, Newson had little time left to complete the other chairs for “Seating for Six,” all of which were made using various different techniques and materials. The LC1 was by far the standout piece in the group and the only one to be sold (it was acquired by the Art Gallery of South Australia despite Newson’s relative anonymity at the time). The next year, Newson wanted to revisit and refine the riveted aluminum technique of the LC1—this time with an edition of multiples in mind. He was at that point a struggling artist living in a London flat that doubled as his studio. To carve the Pod’s plug, Newson “borrowed” polyurethane foam from the model making firm where he had worked creating full-scale replicas of Arabic minarets. He set up a tent outside of his flat to create a mold from the plug, using a hairdryer to coax the fiberglass to set despite the particularly cold and wet weather. After successfully completing the mold, he battled the elements again to extract a fiberglass prototype from it. It was in his bedroom that he cut the aluminum sheets, filed and shaped them, and riveted them to the form.

The Pod of Drawers prototype debuted at the London gallery One Off in 1987 and was shown at Idée in Japan the following year. It wasn’t until several years after Newson’s subsequent return to Australia that the mold was shipped from London, and the edition was completed over the next decade. Throughout the edition, the patterns created by the aluminum sheets vary from piece to piece; some, including the present lot, have the Groult-inspired concentric circle design seen in Newson’s initial sketches of the piece, whereas others (including the prototype) have intersecting diagonal lines. These variations mean that each Pod is a completely unique piece, as no two are entirely identical.

The Pod was the first piece Newson produced in an edition of multiples and is the second of only three Newson pieces featuring riveted aluminum; after the LC1, the Pod, and the Lockheed, Newson abandoned the use of rivets completely. The rivet, Newson said, “was a means to an end, like any other form of fixation, but it ended up having an enormous amount of character, to such an overbearing extent that I didn’t work with it again until I actually made an airplane.” It is precisely this character, when combined with the Pod’s paradoxically erotic forms, that infuses the piece with the subtle irreverence that is central to its enduring charm.