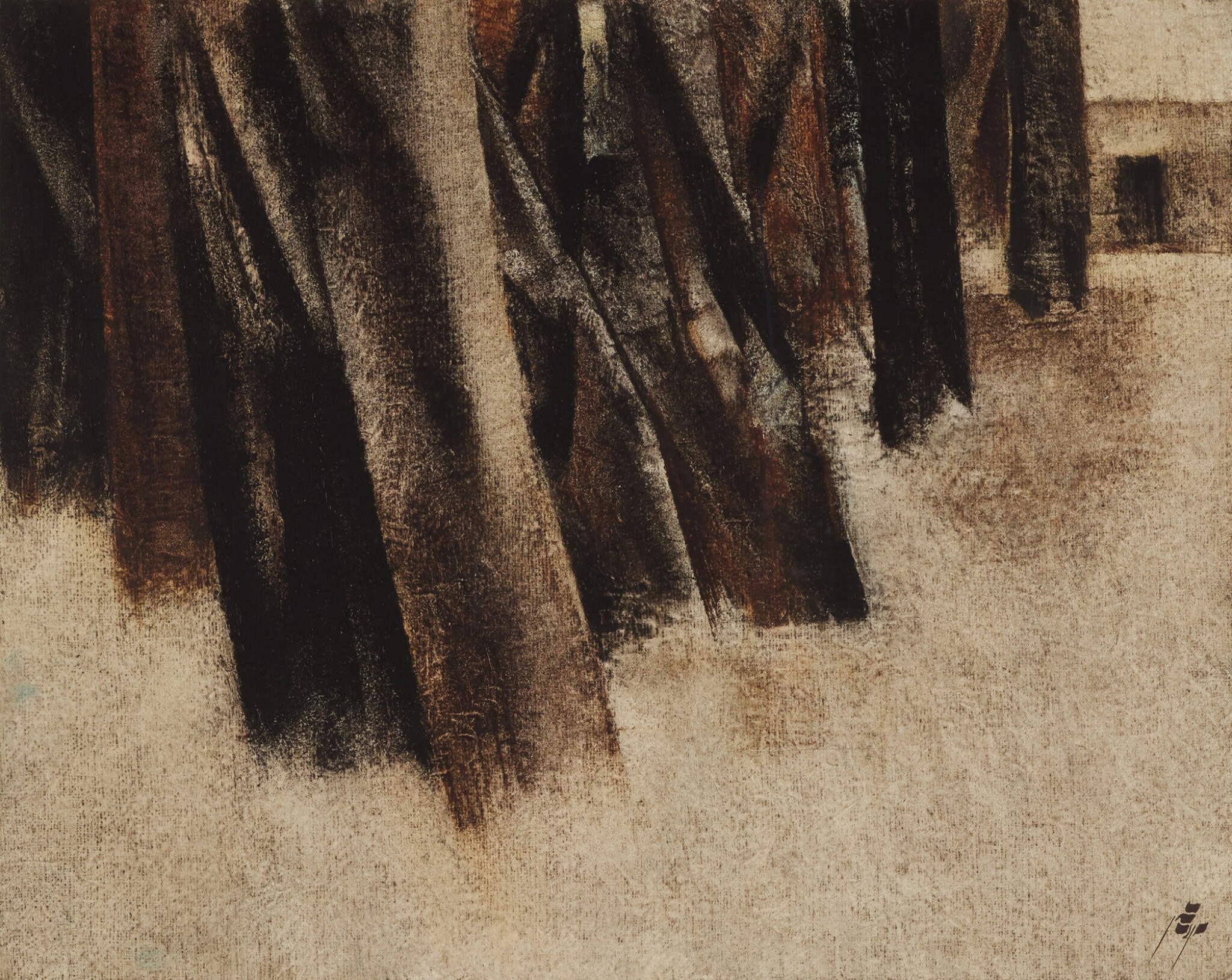 gouache and oil on paper

This work is in good condition, it was previously laid down on card and recently removed by a professional conservator, please consult the department for the report, as viewed.

The online images may represent colours and shades which are different to the lot's actual colour and shades. Unlike a print catalogue there is no standardized colour profile to enable a constant visual representation for online media. In the absence of an industry certified media colour profile for viewing images online, each device whether it be an iPhone, Samsung, laptop, iPad, etc., will display the images to their own unique device setting, therefore the final visual result will always vary.

Please note that there may be restrictions on the import of property of Iranian origin into some or all member countries of the Gulf Co-Operation Council. Any buyers planning to import property of Iranian origin into any of these countries should satisfy themselves of the relevant import regime. Sotheby’s will not assist buyers with the shipment of such items into countries of the Gulf Co-Operation Council. In addition, Fedex and US courier services will no longer carry Iranian-origin goods to any location. Any shipment services would need to be provided by a Fine Art shipping company.
The Artist
Private Collection, Iran (acquired directly from the above in circa late 1970s)
Thence by Descent
Private Collection, UK

Sohrab Sepehri left an indelible mark on the Iranian cultural scene, as one of the most highly acclaimed modern masters in the country. His artistic production stemmed from poetry to painting, each media exercising a mutual influence on the other, inspired by Sepehri's love and longing for his homeland and his travels. The artist’s poetic voice pervaded his painting, conveying a unique expression evocative of inner-contemplation and universal lyricism. Sepehri belongs to the rare class of artists who found a potential for innovation within the preservation of traditional aesthetics (Hamid 2003).

The Iranian city of Kashan, where Sepehri was born, produced a strong representational impulse in his artistic career, driven by his love for its natural landscapes. His imagery hints at the grace of the ‘oasis city’, where trees and plants inhabit the arid desert alongside the local population. Deeply inspired by Indian and Japanese philosophies, Sepehri conceptualized nature as essentially pure, and thus the only cure for human corruption (Hamid 2003). This is how trees came to occupy a major place in Sepehri’s reflections. For the artist, trees are the vector of all four main elements of nature, and as such provide shelter and stability to the living, humans and animals alike. In accordance with Zen tradition, Sepehri invested himself in a disciplined repetition of the tree motif, shedding any superfluous or excessive details in what would become known as The Tree Series (Sayar 2002). Following a meditative endeavour, Sepehri only depicts trunks in a restricted palette of ochre, brown, grey and yellow, in a conscious exercise aiming at grasping the essence and meaning of his subjects. Despite this extreme economy of means, Sepehri successfully captures the texture and complex tonal variations of the trunks and their embracing branches. In the present painting, the semi-abstracted groves of trees are suggested by elaborately layered strokes of brown and black paint, sprung in front of a background alluding to a mud house and the vast desert sky. This work is an exceptional depiction of a landscape using just a few evocative forms, and in its haze, evokes the evanescence of memory. The richness of expression manifest in this painting confirms Sepehri as a modern master.

This work was composed during one of the most creatively fertile periods of Sepehri’s career, as he was kept away from his homeland. After an initial training in the Faculty of Fine Arts in Tehran, the artist attended the Ecole des Beaux-Arts in Paris. He unexpectedly chose to pursue his education in Japan, where he followed a printmaking apprenticeship in Tokyo from 1960. This is where he espoused the Zen and minimalist aesthetics in his own work, learning to deconstruct forms until they reached their most fundamental simplicity (Sayar 2002). Albeit straightforward, the type of brushstroke technique he adopted was extremely challenging, leaving no room for mistakes or corrections (Karimi-Hakkak 2005). During the 1970s, the artist exhibited widely in Europe and North America, including two landmarks solo shows at Galerie Cyrus in Paris and the Elain Benson Gallery in New York. Despite his great success, the artist maintained a deep yearning for the landscapes of his hometown. In creating his Tree Series, he fashioned a whole forest for himself, as an escape from city life. Sepehri’s longing for a homecoming emanating from these paintings took a tragic yet culminating lyrical turn as his life ended. Upon learning that his cancer was incurable, the artist travelled back to Iran, where he died and was buried in Kashan in 1980.